The authors of Modeling the 3D Geometry of the Cortical Surface with Genetic Ancestry mention:

In our group’s previous study, we found that area measures of cortical surface and total brain volumes of individuals of European descent in the United States correlate significantly with their ancestral geographic locations in Europe [ 9 ].

This 2011 study ("A Geographic Cline of Skull and Brain Morphology among Individuals of European Ancestry") is freely accessible:

Background: Human skull and brain morphology are strongly influenced by genetic factors, and skull size and shape vary worldwide. However, the relationship between specific brain morphology and genetically-determined ancestry is largely unknown. Methods: We used two independent data sets to characterize variation in skull and brain morphology among individuals of European ancestry. The first data set is a historical sample of 1,170 male skulls with 37 shape measurements drawn from 27 European populations. The second data set includes 626 North American individuals of European ancestry participating in the Alzheimer’s Disease Neuroimaging Initiative (ADNI) with magnetic resonance imaging, height and weight, neurological diagnosis, and genome-wide single nucleotide polymorphism (SNP) data. Results: We found that both skull and brain morphological variation exhibit a population-genetic fingerprint among individuals of European ancestry. This fingerprint shows a Northwest to Southeast gradient, is independent of body size, and involves frontotemporal cortical regions. Conclusion: Our findings are consistent with prior evidence for gene flow in Europe due to historical population movements and indicate that genetic background should be considered in studies seeking to identify genes involved in human cortical development and neuropsychiatric disease. [. . .]

Apparently the two main groups being compared in the neuroimaging sample are Americans of Northwestern European ancestry and Ashkenazi Jews ("ADNI subjects are spread out primarily along a NW-SE axis and form two distinct clusters corresponding to NW European and Ashkenazi Jewish ancestry"):

To determine if brain morphometry exhibits similar geospatial population trends to the skull morphometry data, we estimated the ancestry of each individual in the ADNI sample using available genome-wide genotype data and confined attention to 626 individuals with a high probability of having European ancestry. In order to assign the European region of origin most likely to reflect the genetic background of each individual, genotypes from ADNI subjects were merged with publically available genotypes from 34 reference populations geographically distributed across Europe, and PCA was pursued. [. . .] 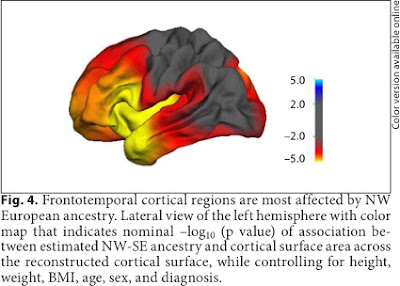 Intracranial and brain volumes and cortical surface area progressively increase with the amount of inferred NW European ancestry (fig. ​(fig.3b),3b), and these measures are approximately 5% larger in the 10% of individuals with the most NW European ancestry compared to the 10% with the most SE European ancestry. This percentage increase matches the percentage increase in cranial length and breadth observed along the same NW-SE geographic axis in the skull data set (fig. ​(fig.2b)2b) and cannot be attributed to a correlation with body size since we controlled for height and weight. This correlation involves specific – not global – brain morphology because hippocampal, basal ganglia, ventricular, and cerebellar volumes and average cortical thickness are not associated with NW-SE ancestry.

Next, we performed both a region of interest analysis and vertex-based tests across the cortex to test whether the surface area of specific cortical regions showed more significant association with the degree of NW-SE ancestry. We found that cortical surface area predominantly in the frontal and temporal lobes from both hemispheres is significantly associated (online suppl. table S4) and is 4–9% larger among 10% of individuals with the most NW European ancestry compared to 10% with the most SE European ancestry. We found a similar frontotemporal pattern of association with the degree of NW-SE ancestry with a vertex-based analysis (fig. ​(fig.4;4; online suppl. fig. S6).

[. . .] the existence of genetic and craniometric clines in modern European populations suggests at least two theories: (1) pre-historic population movements made such a dominant contribution to the structure of genetic variation in Europe that more recent gene flow has not masked it, and (2) local environmental factors and selection generated clinal variation or acted to restore clinal variation after gene flow occurred. One intriguing possibility for such an environmental factor is the cultural conditions associated with possessing agricultural technologies, e.g. sedentarism, altered diet including milk consumption [40] , and new disease exposures [41] . As these technologies spread progressively from SE to NW Europe over several 1,000 years [33] , natural selection may have acted either directly or indirectly to alter brain morphology, thus creating the clinal variation found in this study.

Plots of cranial measures from this study (left) and map of head size from Coon's 1939 book The Races of Europe (right): 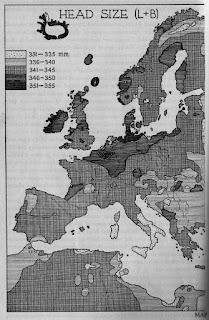 The trend observed here is also consistent with that reported by Maurice Fishberg over a century ago in The Jews: A Study of Race and Environment:

One of the methods of determining the volume of the brain case, and approximately the weight of the brain, is the determination of the cranial capacity. Very few direct measurements of this kind have been taken, because only few Jewish skulls have found their way into anthropological museums, where they could be studied carefully. But from the few studies of this character that have been made, it appears that the Jews are somewhat at a disadvantage. Lombroso's studies of the Jews in Turin, Italy, which were made in an indirect fashion, showed that the Jews have a smaller cranial capacity than the Catholics of that city.2 Weinberg collected measurements of seventeen Jewish skulls in various museums of Europe, which were made properly, and are not approximations. The average cranial capacity was 1421 c.cm., which is about thirty to forty c.cm. below the average cranial capacity of the population of Europe. Of course the small number of skulls thus measured is not sufficient to draw positive conclusions.

As to the weight of the brain, there are also very few observations on record. The author knows only of twentythree Jewish brains reported by Giltchenko,3 four by Weisbach,4 and three by Weinberg.5 The average weight of these brains, as calculated by Weinberg, was 1320.4 gm. Since the average weight of the brain of the European is 1350 gms., the brain of Jews is rather lighter by 30 gms. , or nearly one ounce. Considering that the Jews are shorter of stature than the average Europeans, it would be expected that their brain should also be smaller. But, as Weinberg points out, the average for Germans was found to be 8.22 gm. of brain tissue for each centimetre of stature, while for the Jews it is only 8.05 gms. This shows the Jewish brain lighter not only absolutely, but also relatively.

Do you think these differences are because of paleolithic evolutionary pressures or did southeast europeans miss out on social pressures that acted in the last 1000 years?

Or it could be because of greater neolithic evolutionary pressures on the SE Euros and Jews.

Cranial capacities peaked in the Upper Paleolithic and were shrinking until relatively recently. Suggested explanations include more complex societies / greater division of labor leading to relaxed selection on intelligence, selection for improved efficiency (not necessarily at the expense of intelligence), and human domestication / self-domestication.

I have not looked at the data recently, but I do believe the trend toward reduced brain size was considerably more advanced in Neolithic farmers than European hunter-gatherers, and this seems likely to be a significant contributor to the NW-SE cline seen here. Though I also wouldn't rule out a role for more recent differences in selection pressure (especially if brain size is also larger in NW Europe than NE Europe).

I do not understand why Inuit have not evolved or are evolving same Nordic did. The scenario is the same. What is missing?

I'm confused by this. I would have thought that smaller brains would have resulted in lower IQ. But the Jews have the highest IQ of any demographic in the world. There must be something else going on besides brain size.

jews have high verbal abilities which does take less brain matter than spatial ones.

If you need your ex-girlfriend or ex-boyfriend to come crawling back to you on their knees (no matter why you broke up) you got to watch this video
right away...