"George Church considers recent advances in genomics and personalized medicine and asks: as we seek to eliminate disorders like schizophrenia and dyslexia, or even rare genetic diseases, how should we think about preserving human diversity?"

"Rare [does not necessarily equal] Deleterious

Conclusion: "So anyway we and others are sequencing these long-lived animals and humans and we hope this will be part of a bigger project to measure and design humans going forward."

'Eske Willerslev from the University of Copenhagen on "Understanding Historical Human Migration Patterns and Interbreeding Using the Ancient Genomes of a Palaeo-Eskimo and an Aboriginal Australian" at the 7th Annual Genomics of Energy & Environment Meeting on March 21, 2012 in Walnut Creek, Calif.'

At the end, Willerslev mentions "we are also doing the genome of Clovis, the oldest skeleton in the Americas". I have no idea which skeleton in particular he's talking about, but any Paleo-Indian genome should be informative.

Ken Weiss links to this speech by Carl Zimmer.

Obviously, that was not the biggest news to those who were paying attention. But even if it had been, I'd still be taken aback by a comment like this from a science reporter. In fairness, Zimmer's talk overall is reasonable and inoffensive compared to Weiss's blog post, and does not appear to be motivated by the same racial anxieties:

So just to conclude I would say that my experience in writing about genomes has firmly convinced me that we are in the middle of another scientific revolution like the one in the middle of the 17th century and that genomes are a big part of that. But it's important to focus on what makes that revolution so important. So in the 1600s, for example, one of the most important things that happened was the people invented microscopes. [. . .] But again it wasn't so much the microscopes themselves that mattered, but what people were seeing with them.

Email ThisBlogThis!Share to TwitterShare to FacebookShare to Pinterest
Labels: DNA

Is whole genome sequencing fading? Will it rebound (or relapse)?

There are various informal indicators that funders are losing enthusiasm for human whole genome sequencing. [. . .] If this turns out to be more than a few anecdotes or personal opinions, and is actually occurring, it's understandable and to be lauded. As we think we can truthfully claim, we have for years been warning of the dangers of the kind of overkill that genomics (and, indeed, other 'omics' fads) present: promise miracles and you had better deliver!

The same thing applies to evolutionary studies that seek whole genome sequences as well as to studies designed to use such data to predict individual diseases. There are too many variants to sort through, the individual signal is too weak, and too many parts of the genome contribute to many if not most traits, for genomes to be all that important--whether for predicting future disease, normal phenotypes like behaviors, or fitness in the face of natural selection.

The proper response to genomic complexity is of course not to throw ones hands up and go back to candidate gene studies, but to sequence lots and lots of genomes in full. This is what needs to happen, and falling sequencing costs mean this is what will happen, regardless of what Ken Weiss wants.

Note: Ken Weiss is "Evan Pugh Professor of Anthropology and Genetics at Penn State University". I can think of a few possibilities: (1) Weiss is sincere in believing medical science and evolutionary research would be better advanced with less whole genome sequencing; he's not malicious -- just short-sighted, unimaginative, and breathtakingly ignorant of the broader state of his supposed academic specialty. (2) Weiss is merely jealous that his colleagues are getting bigger grants than him, a frailty he could perhaps be forgiven. (3) "Anthropology and Genetics" professor Weiss, for some reason, prefers that human evolutionary and genetics research not advance.

Looking at some of his other posts, I see plenty of evidence ethnic and/or ideological considerations underpin Weiss's "warnings" about genomics. 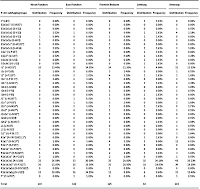 "Doing research on intelligence is fascinating, and also sometimes frustrating. Like being a meteorologist, when you tell someone you work on intelligence you find that they start telling you about your own topic. So, Prof Ian Deary of the University of Edinburgh thinks that it is useful show people some real data that come from intelligence tests; opinions can then be founded on data, or at least one can query the data-gathering or its interpretations.

Without making assumptions about what intelligence tests measure or why people differ in their scores, he presents some results and invites people's reactions to them. He is still surprised by the fact that sitting down with one of these tests for three quarters of an hour or so and getting a score can have such far-reaching predictions, and cause so many arguments."