Evidence for Homo erectus genes in Papuans (and Chinese)?

Steve Sailer says he's "been alerted that there should be science news soon of a caliber comparable to the recent human-neanderthal inter-mating story." At Gene Expression, Greg Cochran calls attention to a comparison in the supplementary material of the Neanderthal genome paper showing "San closer to Han+French than to" Papuans. The San are also shown to be closer to the French than to the Chinese (and the Papuan closer to Han than French), though to a lesser degree. In addition, the San are shown to be closer to Han+French than to Yorubans, perhaps reflecting archaic admixture among West Africans; on the other hand, Yorubans are closer to non-Africans than to San.

Incidentally, this last point is in keeping with Kalinowski's assertion based on autosomal STR data. But as before I'm inclined to attribute any increased similarity between Negroids (as opposed to Bushmen) and non-Africans to back-migration from Eurasia to Africa, given that Y chromosomes likely of ultimate Eurasian origin (namely, E, and to a much lesser extent R1b, lineages) predominate among Negroids, while among Bushmen older clades predominate.

Update: A commenter passes on a link to a Google translation of a Spanish newspaper article reporting that Paabo and friends have sequenced the genome of the Denisova hominin, evidently a Homo erectus, and found evidence that genes related to the specimen persist in Melanesians. Update 2: Links are now dead (I assume the story is still supposed to be under embargo); see below for Google translation. Update 3: Much more information on this story is now available elsewhere, of course.

Says this guy. While the author seems to be motivated by race-denialism, I think he's probably right that "forcing STRUCTURE to place individuals into too few clusters" can lead to non-optimal results (which would be consistent with what Dienekes appears to be finding). Certainly, contra Rienzi's railing against "incompetent amateurs, with their K=15 ADMIXTURE plots and clustering with up to 124 components", there's no reason to assume that in general runs with lower K will give more meaningful or accurate results than runs with higher K using programs like STRUCTURE and admixture.

I'm not terribly interested in Kalinowski's specific attempt to prove that African farmers are genetically closer to Europeans than to African hunter gatherers, but two things: (1) if this is true, I'd say it's much more likely to be attributable to back-migrations from Eurasia than to Europeans being descended from "African farmers"; (2) I enjoyed the section of the article in which the author promotes neighbor-joining trees as a superior method for visualizing relationships between populations, only to go on to explain that "even a tree with a R2 of 0.98 does not accurately depict all of the relationships between populations" since it still "depicts all sub-Saharan African populations as being more similar to each other than to European populations."

The Denisova hominin need not be an out of Africa story

I had a similar reaction when the original article was published, but this piece in the Journal of Human Evolution makes a much more extensive and better-argued case:


The recent retrieval of a complete mitochondrial (mt) DNA sequence from a 48–30 ka human bone from Denisova (Siberia) (Krause et al., 2010) is a remarkable achievement fully deserving international acclaim. Without wishing to detract from this feat, however, we wish to challenge their conclusion that the Denisova hominin “derives from a hominin migration out of Africa [ca. 1.0 Ma] distinct from that of the ancestors of Neanderthals and of modern humans” (Krause et al., 2010: 894). In addition, we challenge their assumption that the ancestors of the Neanderthals left Africa between 500–300 ka. In our view, alternative interpretations of the evidence are available and should be considered.


Chinese authorities are believed to be spying on companies involved in genealogy and medical research in Iceland, as stated in documents sent by the US Embassy in Reykjavík to the US Foreign Service in Washington, leaked by Wikileaks.

This is stated in a report from February 26, 2009, which is marked as “confidential”. Copies of it were sent to the CIA, FBI and DIA, Fréttabladid reports.

In another report from December 24, 2009, also marked as “confidential”, an annual meeting of the US Embassy’s counter-spying group directed by the ambassador’s substitute Sam Watson is covered.

The report states that US authorities believe that their Chinese counterparts have continued with their intellectual spying in Iceland, by means of human intelligence and with technical equipment, such as bugging telephone lines and breaking into databases on the internet.

deCODE employs a Chinese national as "Vice President of Statistics", but Kari Steffanson is unconcerned on that front since the employee "has lived here for 14 years and considers Iceland his home".
Posted by n/a at 12/16/2010 10:55:00 AM 6 comments: 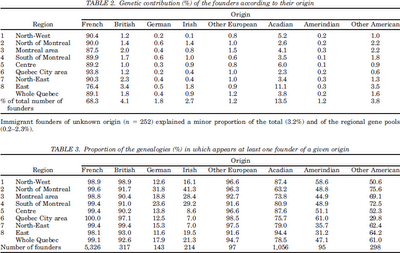 Tables from Admixed Ancestry and Stratification of Quebec Regional Populations:

Polako: Locating and visualizing minority non-European admixtures across our genomes

Rienzi fumes about Dienekes' description of his own efforts as "cutting edge" and explains:


In my opinion, Dienekes and Doug McDonald and Polako should be commended for attempting to further our understanding of human genetic diversity. They are trying to broaden our understanding. Hopefully, all three gentlemen are self-aware enough to know that their "findings" are at best tentative, should be interpreted cautiously, and await confirmation in the literature.

This is not how science works. Anyone can download the software and reference data Dienekes is playing with and attempt to verify or impugn his results. Certainly some amateurs make ridiculous claims based on faulty analyses. So do some commercial entities and published academics. If you're not able to assess Dienekes' work on it's own merits, you're not in a better position to do so with comparable research merely because it has passed "peer review". One can certainly choose to ignore results generated by amateurs if one pleases, but choosing to do so has no bearing on the validity of the results.

Hail: The Blackest Surnames in the USA; The Hated Richard Nixon’s Ancestry

Another theory on the origin of blond hair:


Many traits have been investigated for their role in attractiveness, but one question has repeatedly captured the attention of researchers down the years – why do many men prefer blondes? Over time, many explanations have been put forward. It has been suggested that men prefer rounder faces and that blonde hair is kinder to the outline of the face, or that natural blondes have softer skin, which men find attractive. Another suggestion is that blondes were a genetic mutation which men evolved to value as a status symbol because of the original scarcity.

But according to research out of the University of California, the answer is that blonde hair, like the peacock's tail or the rooster's bright-red plumage, is a sign of fitness. The evolutionary reason why men are attracted to blondes is that the hair and skin colour make it easier to spot problems. Anaemia, jaundice, skin infections, cyanosis (a sign of heart disease) and some other conditions, are, these researchers say, much easier to detect in fair-skinned individuals than in brunettes.


The best-fitting model revealed that a biological mechanism facilitates affiliation with arbitrary groups and exists alongside essentialist systems that evolved to process salient cues, such as shared beliefs and ancestry.