Shocking, perhaps, but here are interviewer ratings of black womens' attractiveness vs. skin color from wave 3 of Add health: 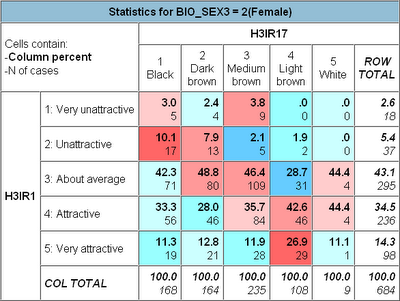 Please make no unkind inferences concerning a possible relationship between degree of European admixture and attractiveness. The obvious conclusion is Kanazawa's critics were right: biased raters downgrade the beauty of African American women owing to their racism and brainwashed adherence to Eurocentric beauty standards. This insidious form of racism apparently extends to more literal sexual marketplaces:


Gwen and Alicia were especially coveted because of their skin color. In a rigid hierarchy that clinical psychologist Melissa Farley—founder of Prostitution Research & Education, a San Francisco–based think tank—calls “eroticized racism,” the “snow bunnies” (white girls) outclass the “ducks” (black girls). “Maybe one out of 50 callers would request a black or Latina,” says Caroline. “Most asked for ‘the girl next door’—a blonde, thin teenager with big breasts. That’s candy to ants.” [Sex Trafficking of Americans: The Girls Next Door]

I'll sheepishly admit I'm a longtime regular at strip clubs. I'll often get black strippers with slightly desperate looks on their faces sitting at my table trying really hard to be friendly to me hoping they can sell me a lap dance. Meanwhile the blonde strippers in the club don't even have to approach anyone; the male customers swarm the stage when they get up to dance. In a strip club it's kind of obvious who men find the most attractive. I admit this is not a scientific study, just my personal observation. [A comment at Mangan's]

Note: Kanazawa's methods may well be flawed. I personally wouldn't be comfortable drawing the conclusion he did based on the data he did. I actually expect racial differences (or similarities) in average rated physical attractiveness have little to do with actual sexual attraction/behavior. To the extent that ratings of physical attractiveness reflect subconscious judgments of youth, health, symmetry, and so on, we should be able to meaningfully rank attractiveness across races; but this does not make even an "attractive" black woman an ideal or preferred sexual partner for a normal white man. Sorry Severn (commenter at Mangan's who is flipping out about Kanazawa's "bad science" and who coincidentally says he has dated black women).
Posted by n/a at 6/02/2011 02:56:00 AM 15 comments: