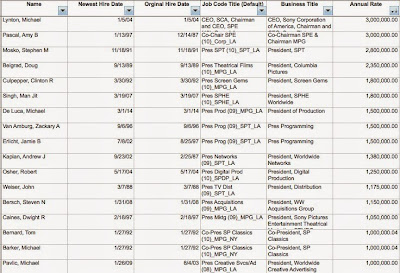 One other observation to make about Sony Pictures’ top-paid executives is that they’re almost entirely white. From some quick Internet searching, fifteen of the seventeen appear to be Caucasian, one (Dwight R. Caines) appears to be African-American, and one (Man Jit Singh) appears to be South Asian. (I’ll update these numbers when and if I hear back from Sony Pictures.) In other words, unless I’m missing something, the upper pay echelon of Sony Pictures is 94 percent male, and 88 percent white. [. . .]

Sony Pictures isn’t alone in having a predominantly white, predominantly male leadership, or paying its top executives multiples of what other employees make. But the numbers leaked in the recent hack – assuming they’re accurate – would mean that the top ranks of one major Hollywood studio are perhaps even less diverse than those of Silicon Valley tech companies and large Wall Street banks. After it patches up its security measures, that’s another problem Sony Pictures may have to reckon with.

To point out the obvious, there's one group overrepresented to a much greater degree than "whites" on this list. By my count, 4 out of 4 of the most highly paid are Jewish, and, looking at the full list, 9 out of the 15 "whites" are known to be Jewish or have distinctively Jewish names (Lynton, Pascal, Mosko, Belgrad, Erlicht, Kaplan, Osher, Weiser, Bersch). In addition, Michael De Luca is half Jewish; based on his physical appearance, Michael Barker is almost certainly Jewish; and I have not investigated the ancestry of the four remaining whites on the list (Clinton Culpepper, Zackary Van Amburg, Tom Bernard, and Michael Pavlic). Jews are overrepresented relative to their share in the US population by at least an order of magnitude. Members of the Northwestern European American majority are massively underrepresented. How does Kevin Roose propose Sony Pictures "reckon with" this problem?
Posted by n/a at 12/02/2014 01:07:00 PM 6 comments: