Researchers at the University of California, San Diego and the School of Medicine have found that the three-dimensional shape of the cerebral cortex -- the wrinkled outer layer of the brain controlling many functions of thinking and sensation -- strongly correlates with ancestral background.

Modeling the 3D Geometry of the Cortical Surface with Genetic Ancestry

Knowing how the human brain is shaped by migration and admixture is a critical step in studying human evolution [ 1, 2 ], as well as in preventing the bias of hidden population structure in brain research [ 3, 4 ]. [. . .] The geometry of the cortical surface contains richer information about ancestry than the areal variability of the cortical surface, independent of total brain volumes. Besides explaining more ancestry variance than other brain imaging measurements, the 3D geometry of the cortical surface further characterizes distinct regional patterns in the folding and gyrification of the human brain associated with each ancestral lineage. 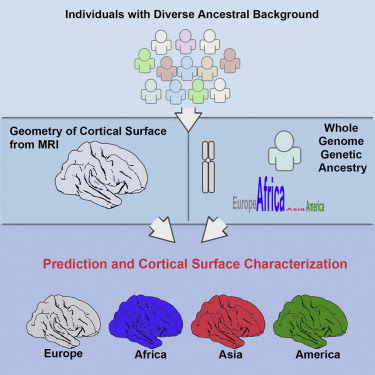