Does Masculinity Matter? The Contribution of Masculine Face Shape to Male Attractiveness in Humans (PLoS ONE):


The proposal [. . .] that masculine men are immunocompetent and attractive – underpins a large literature on facial masculinity preferences. Recently, theoretical models have suggested that current condition may be a better index of mate value than past immunocompetence. This is particularly likely in populations where pathogenic fluctuation is fast relative to host life history. As life history is slow in humans, there is reason to expect that, among humans, condition-dependent traits might contribute more to attractiveness than relatively stable traits such as masculinity. [. . .]

The authors point out problems with attempts to assess the affect of masculinity on facial attractiveness that rely on human ratings of perceived masculinity or digital manipulation of photographs: (1) for rated masculinity, "subjective judgments of masculinity are based on factors other than just morphological masculinity"; (2) with morphing techniques, factors potentially more important than masculinity in determining real world attractiveness are not allowed to vary, and a preference for averageness might result in participants systematically preferring more or less masculine morphs even if women are completely indifferent to masculinity. As for the effects of skin color, in this sample:

Other studies have also found increased skin lightness and redness associated with perceived health and attractiveness. The association of yellowness with attractiveness "may be attributable to dietary carotenoid deposition in the skin. This suggests that carotenoids, which are involved in health signaling (Massaro et al. 2003; Saks et al. 2003) and sexual selection (Eley 1991; MacDougall and Montgomerie 2003; Massaro et al. 2003) in many species of birds and fish, may also affect the appearance of health in humans."
Posted by n/a at 10/29/2010 04:34:00 PM 1 comment:

A commenter links to a 2007 neuropolitics.org post ("Who Are The Caucasians Attracted To? Politics, Religion, and Physical Attraction") that reports the following survey results. As expected, "white females were more attracted to whites than are white males".

A One-Way Human Mission to Mars:


There are many reasons why a human colony on Mars is a desirable goal, scientifically and politically. The strategy of one-way missions brings this goal within technological and financial feasibility. Nevertheless, to attain it would require [. . .] a return to the exploration spirit and risk-taking ethos of the great period of Earth exploration, from Columbus to Amundsen, but which has nowadays being replaced with a culture of safety and political correctness.

The Lost Tribes of Europe ("As national borders blur, the Continent's original minorities are fighting to reclaim their ancient cultures and identities")

Diversity among African Pygmies (PLoS One):


Thirty three-dimensional (3D) landmarks registered with Microscribe in four cranial samples (Western and Eastern pygmies and non-pygmies) were obtained. Multivariate analysis (generalized Procrustes analysis, Mahalanobis distances, multivariate regression) and complementary dimensions of size were evaluated with ANOVA and post hoc LSD. Results suggest that important cranial shape differentiation does occur between pygmies and non-pygmies but also between Eastern and Western populations and that size changes and allometries do not affect similarly Eastern and Western pygmies. [. . .] Although not directly related to skull differentiation, the diversity among pygmies would probably suggest that the process responsible for reduced stature occurred after the split of the ancestors of modern Eastern and Western pygmies.

A Der Spiegel article makes a case for the role of mass migration in shaping the European gene pool, while failing to mention the evidence for large-scale post-Neolithic population replacement. Jean M is unclear on whether the attempt to link lactase persistence to the LBK rests on unpublished aDNA results or questionable computer models. Greg Cochran on the latter eventuality:


Judging from the comment about lactose tolerance in Austria/Slovakia/Hungary, they may be relying on a paper that came out of Mark Thomas's lab last year: "The Origins of Lactase Persistence in Europe".
The authors of that paper tried to estimate the region of origin using simulations - but one of the inputs was the current distribution of that allele. Which is reasonable, except that they did not use the actual distribution of that allele, but rather a truncated distribution - their map is centered on central Europe and stops halfway through the Ukraine. That ensured that they would find an origin in somewhere in middleuropa.

The allele doesn't stop there, though: it has a second region of fairly high frequency in northern India. Before Mongols and Turks took over the Eurasian steppe, the frequency of that allele may have been high in those steppe regions. Scythians are described as milk-drinkers quite a while ago - in the Iliad. And my sources claim that the royal guard of the Hittites also 'drank sweet milk'...

Checking out ancient DNA from Kurgan burials in that region might clarify this.

I think it is difficult to imagine a historical process that moves a lot of people from Bavaria to the Punjab: it is easier to imagine one that expands to both regions from somewhere in-between.
Which would explain the distribution of the Indo-European languages, also.

When you think about it, it may not be easy for German researchers to talk about this hypothesis. I think they have trouble saying "Aryan" nowadays.


Problem is: from the standpoint of ancient DNA samples, the lactase persistence mutation was also absent within the early Neolithic! The article is full of details that are wrong or misleading. [. . .]

The [mtDNA] differences between early Neolithic and later Europeans suggests that post-Neolithic migrations -- real Völkerwandurung -- actually had a major impact on the European gene pool. What we see today is not a pattern established 6000 years ago, but a palimpsest richly painted with strokes from successive migrations.

One aspect of this scenario: There's no reason to link the early Neolithic with Indo-European languages. There were many later widespread population movements that might have carried this language family, and we know that these later movements were genetically decisive -- at least, as concerns the maternal genealogy. The relation of Y chromosome haplogroups with mtDNA haplogroups is a critical question, but even more necessary is the development of an effective means of testing these hypotheses with nuclear genotype data.


Wilkins [. . .] complained to Crick and Watson in a rediscovered letter: "To think that Rosie had all the 3D data for 9 months & wouldn’t fit a helix to it and there was I taking her word for it that the data was anti-helical. Christ."

The horse, the wheel, and language

It appears someone took the liberty of uploading David Anthony's book on Indo-European origins to scribd. Read and discuss if you wish.
Posted by n/a at 10/06/2010 08:22:00 AM 5 comments:

A post by Notus Wind brought this paper to my attention:


Although mutation provides the fuel for phenotypic evolution, it also imposes a substantial burden on fitness through the production of predominantly deleterious alleles, a matter of concern from a human-health perspective. [. . .] a consideration of the long-term consequences of current human behavior for deleterious-mutation accumulation leads to the conclusion that a substantial reduction in human fitness can be expected over the next few centuries in industrialized societies unless novel means of genetic intervention are developed.

I know Hamilton expressed similar concerns, but to the extent accelerated accumulation of deleterious mutations under modern conditions is a real/serious problem this author's suggestion of "multigenerational cryogenic storage and utilization of gametes and/or embryos" seems preferable to some of Hamilton's goofier "solutions" (such as marrying HIV- Nairobi prostitutes to protect one's offspring from impending AIDS epidemic). I'm not too worried about imminent mutational meltdown (some modern "problems" like antibiotics may be in the process of solving themselves), but from a strictly conservationist or even historical standpoint, large-scale, long-term storage of human genetic and/or gametic material makes sense. If we can see the need for plants and animals, why not for ourselves?
Posted by n/a at 10/04/2010 05:50:00 AM 559 comments:


All this offers up rather exciting prospects, since it makes half the cities in Germany suddenly 1,000 years older than previously believed. "Our atlas is a treasure map," team member Andreas Kleineberg says proudly, "and the coordinates lead to lost places in our past."

Archaeological interest in the map will likely be correspondingly large. Archaeologists' opinions on the Germanic tribes have varied over the years. In the 19th century, Germany's early inhabitants were considered brave, wild-bearded savages. The Nazis then transformed them into great heroes, and in the process of coming to terms with its Nazi past, postwar Germany quickly demoted the early Germanic peoples to proto-fascist hicks. [. . .] More recent research proves this view to be complete invention. 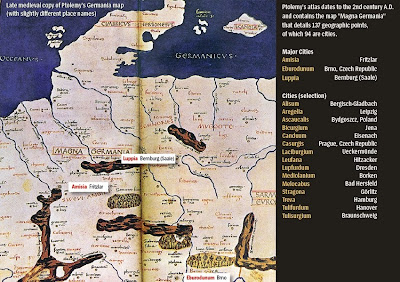