A Genetic Census of America

Using AncestryDNA results from over a quarter million people, the AncestryDNA science team set out to perform a “genetic census” of the United States. [. . .]

Solely using ethnicity estimated by DNA, these maps reveal spatial patterns that are telling of the ancestral origins of present day Americans: where they came from and where they eventually settled. [. . .]

For example, let’s look at the Scandinavian map. Scandinavian immigrants – from Sweden, Norway, and Denmark – tended to settle in the upper Midwest where geography, culture, and local economics felt familiar to life in the old country.

On the map, these are the greenest regions: the states with the highest amounts of Scandinavian ancestry. In other words, DNA also suggests localized migration of individuals of Scandinavian origin to North Dakota, Minnesota, and neighboring states, with little migration to other U.S. regions. History agrees with genetics!

Look at the Irish ancestry map as another example. The highest statewide averages are concentrated in Massachusetts and other states in the Northeastern U.S. – where many Irish immigrants, forced to leave their homes and lands, settled in the 19th century. Growing numbers of Irish that arrived after the 1820s were often poor and common laborers, and took jobs in the construction of buildings, canals, roads, and railways in cities in the eastern United States.

Many of these cities still show the highest average amounts of Irish ethnicity in the U.S. today! DNA affirms that many descendants of Irish immigrants still live where their ancestors initially settled – in the Northeast.

If you look at the maps for Great Britain and Europe West, you see that other ancestries are more widespread across the whole country. Leading up to the Boston Tea Party and the Declaration of Independence in 1776, large numbers of Europeans arrived in what is now the U.S., in some cases to escape religious persecution. While there were subsequently many waves of immigration, individuals primarily from Western Europe and Great Britain were our first Americans.

That we see British ancestry in many people of the U.S. may be evidence of the long history of individuals from Great Britain migrating to the United States, and far and wide across those states.

As I mentioned, the "Irish" estimates are likely inflated in much of the country, with Scotch-Irish, Scottish, and Welsh probably contributing a considerable part of the "Irish" component outside of the Northeast.
Posted by n/a at 4/05/2014 06:13:00 PM No comments: 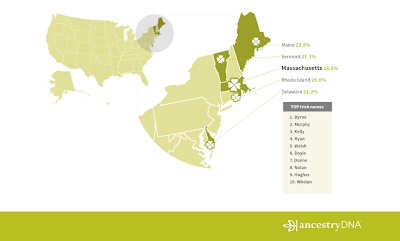