A preprint on some ancient DNA work in England is up. Researchers sequenced samples from seven early and middle Anglo-Saxon period and three late Iron Age (presumably Celtic) skeletons.

We  generated  a  principal  component  plot  of  the  ten  ancient  samples  together with  relevant  European  populations  selected  from  published  data 10,11  (Extended data  Figure  3).  The  ancient  samples  fall  within  the  range  of  modern  English  and Scottish  samples,  with  the  Iron  Age  samples  from  Hinxton  and  Linton  falling closer  to  modern  English  and  French  samples,  while  most  Anglo-­Saxon  era samples  are  closer  to  modern  Scottish  and  Norwegian  samples.  Overall,  though, population  genetic  differences  between  these  samples  at  common  alleles  are very  slight.

There are  striking  differences  in  the  sharing  patterns  of  the  samples,  illustrated  by  the ratio  of  the  number  of  rare  alleles  shared  with  Dutch  individuals  to  the  number shared  with  Spanish  individuals  (Figure  2a).   The  middle  Anglo-­‐Saxon  samples from  Hinxton  (HS1,  HS2,  HS3)  share  relatively  more  rare  variants  with  modern Dutch  than  the  Iron  Age  samples  from  Hinxton  (HI1,  HI2)  and  Linton  (L).  The early  Anglo-­‐Saxon  samples  from  Oakington  are  more  diverse,  with  O1  and  O2 being  closer  to  the  middle  Anglo-­‐Saxon  samples,  O4  exhibiting  the  same  pattern as  the  Iron  Age  samples,  and  O3  showing  an  intermediate  level  of  allele  sharing, suggesting  mixed  ancestry.  The  differences  between  the  samples  are  highest  in low  frequency  alleles  and  decrease  with  increasing  allele  frequency.  This  is consistent  with  mutations  of  lower  frequency  on  average  being  younger, reflecting  more  recent  distinct  ancestry,  compared  with  higher  frequency mutations  reflecting  older  shared  ancestry.

Comparing the relative number of rare alleles shared with the Dutch and Spanish samples, the researchers estimate 30% Anglo-Saxon admixture in the present-day East English and 20% in the Scottish and Welsh.

We  also  examined  using  the  same  method  30  modern  samples  from  the  UK10K project   16 ,  10  each  with  birthplaces  in  East  England,  Wales  and  Scotland.  Overall, these  samples  are  closer  to  the  Iron  Age  samples  than  to  the  Anglo-­‐Saxon  era samples  (Figure  2a).  There  is  a  small  but  significant  difference  between  the  three modern  British  sample  groups,  with  East  English  samples  sharing  slightly  more alleles  with  the  Dutch,  and  Scottish  samples  looking  more  like  the  Iron  Age samples.  To  quantify  the  ancestry  fractions,  we  fit  the  modern  British  samples with  a  mixture  model  of  ancient  components,  by  placing  all  the  samples  on  a linear  axis  of  relative  Dutch  allele  sharing  that  integrates  data  from  allele  counts one  to  five  (Figure  2b).  By  this  measure  the  East  England  samples  are  consistent with  30%  Anglo-­‐Saxon  ancestry  on  average,  with  a  spread  from  20%  to  40%, and  the  Welsh  and  Scottish  samples  are  consistent  with  20%  Anglo-­‐Saxon ancestry  on  average,  again  with  a  large  spread  (Supplementary  Table  2).  An alternative  and  potentially  more  direct  approach  to  estimate  these  fractions  is  to measure  rare  allele  sharing  directly  between  the  modern  British  and  the  ancient samples.  While  being  much  noisier  than  the  analysis  using  Dutch  and  Spanish outgroups,  this  yields  consistent  results  (Extended  Data  Figure  4  and Supplementary  Table  2).  In  summary,  this  analysis  suggests  that  only  20-­‐30%  of the  ancestry  of  modern  Britons  was  contributed  by  Anglo-­‐Saxon  immigrants, with  the  higher  number  in  East  England  closer  to  the  immigrant  source.  The difference  between  the  three  modern  groups  is  surprisingly  small  compared  to the  large  differences  seen  in  the  ancient  samples,  although  we  note  that  the UK10K  sample  locations  may  not  fully  reflect  historical  geographical  population structure  because  of  recent  population  mixing.

I have not thought about it deeply, but the rare variant comparison method used by the authors seems like it should produce reasonable results, at least for the relatively straightforward admixture estimates (with the understanding that Anglo-Saxons and Iron Age Britons are not the only two possible source populations for the modern British). I will say I was surprised to see Britain sharing a branch with Finland in this plot (even though it's a short one) to the exclusion of Denmark and Netherlands: 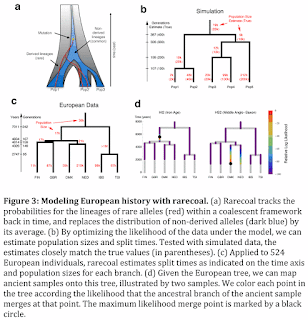 I've seen a few people interpret this study's estimates as a vindication of the ridiculous admixture estimates featured in the People of the British Isles project paper. For me, the ancient DNA results confirm my initial impression: the methods the POBI authors used to generate their estimates of ancient admixture were useless for divining what they thought they could divine.

That this 30% estimate informed by ancient DNA falls within the range of estimates suggested by the POBI authors is primarily a testament to the extremely broad range of possible admixture estimates they offered up (spanning 10% to 50%, depending on what one subjectively deemed "likely"). The POBI authors themselves were pushing for ~10% Anglo-Saxon admixture in the 19th-century Central and South English population (and if I recall correctly ~0% in the Welsh). POBI volunteers were primarily middle-aged or older people who could document four grandparents all born in particular locations. The UK10K modern British samples appearing in the ancient DNA paper are not screened in a similar manner, but are simply classified based on the sample donor's birth place. This means at least a couple generations (and probably disproportionately important generations, at that, as concerns mobility) of additional homogenization will have taken place.

Gene flow into England over the past millennium (from Wales, Scotland, Ireland, and France) will have tended to make the English look less Anglo-Saxon and more "Iron Age". The Scandinavian component in the Normans and particularly their followers was probably outweighed by the French; and subsequently France probably remained one of the main sources of continental immigrants into England at least down to the Huguenots. It's said around 50,000 Huguenots came to England (against a 17th-century English population of around 5 million). 1% does not sound like an especially large wave (and it's certainly not by the standards of modern mass immigration), but these immigrants were concentrated in south and east England:

Huguenot settlement was concentrated in London and the south, East Anglia and the Fens

Even a relative trickle of continental immigrants over the past 1000 years might have had a noticeable cumulative effect on the English gene pool, and Scottish, Welsh, and Irish gene flow into England over the past millennium is likely even more significant. 24% of British claim Irish ancestry recent enough to be aware of, including 77% of those in London. Around 10% of the UK population is estimated to have an Irish grandparent.

According to the authors:

The  genetic  analyses  described  above  add  significantly  to  our  picture  of  Anglo-­Saxon  migration  into  Britain.   In  the  cemetery  at  Oakington  we  see  evidence  even in  the  early  Anglo-­Saxon  period  for  a  genetically  mixed  but  culturally  Anglo-­Saxon  community 21,22 ,  in  contrast  to  claims  for  strong  segregation  between newcomers  and  indigenous  peoples 7 .  The  genomes  of  two  sequenced  individuals are  consistent  with  them  being  of  recent  immigrant  origin,  from  different continental  source  populations,  one  was  genetically  similar  to  native  Iron  Age samples,  and  the  fourth  was  an  admixed  individual,  indicating  intermarriage.   Despite  this,  their  graves  were  conspicuously  similar,  with  all  four  individuals buried  in  flexed  position,  and  with  similar  grave  furnishing.  Interestingly  the wealthiest  grave,  with  a  large  cruciform  brooch,  belonged  to  the  individual  of native  British  ancestry  (O4),  and  the  individual  without  grave  goods  was  one  of the  two  genetically  “foreign”  ones  (O2),  an  observation  consistent  with  isotope analysis  at  West  Heslerton  which  suggests  that  new  immigrants  were  frequently poorer   23,24 .  Given  this  mixing  apparent  around  500CE,  and  that  the  modern population  is  no  more  than  30%  of  Anglo-­Saxon  ancestry,  it  is  perhaps  surprising that  the  middle  Anglo-­Saxon  individuals  from  the  more  dispersed  field  cemetery in  Hinxton  all  look  genetically  consistent  with  unmixed  immigrant  ancestry.  One possibility  is  that  this  reflects  continued  immigration  until  at  least  the  Middle Saxon  period.

In fact, there's nothing really inconsistent with the "Anglo-Saxon apartheid" paper in the mixed earlier samples and unmixed later samples. The Anglo-Saxon period samples tested here are all female. It's easy to imagine intermarriage rates may have been higher among the earliest Anglo-Saxon settlers, when their fraction of the total British population would have been smallest -- especially if females were to any degree underrepresented among the incoming Anglo-Saxons.

From the "Anglo-Saxon apartheid" paper (Evidence for an apartheid-like social structure in early Anglo-Saxon England):

We have only considered the effects of differences in ethnic reproductive advantage and inter-ethnic marriage rate on patterns of genetic variation. If there were no sex bias in the intermarriage rate, then we would expect these effects to be equal for the different genetic systems (mitochondrial DNA, Y-chromosome, X-chromosome, autosomes). However, part of the motivation for this study was to seek an explanation for the discrepancy between archaeological estimates of the size of the Anglo-Saxon migration (Härke 1998, 2002; Hills 2003) and estimates based on Y-chromosome data (Weale et al. 2002; Capelli et al. 2003). There are three further factors that could exacerbate replacement of indigenous Y-chromosomes. The first is that when intermarriage does occur the offspring may be more likely to assume the identity of the father, thus reducing the effective intermarriage rate, as it would affect patterns of Y-chromosome diversity. The second is that forced extra-marital matings are more likely to occur between Anglo-Saxon men and native British women than the reverse since, as the law codes of Ine indicate, the degree of punishment was determined by the social status of the victim. The third is based on the theory that relatively ‘good condition’ males tend to out-reproduce females of a similar condition, whereas relatively ‘poor condition’ females tend to out-reproduce their male counterparts (Trivers & Willard 1973). From this, a strategy of sex-biased parental investment, whereby relatively wealthy parents favour wealth transfer to their sons, should emerge (Hartung 1976). Such a phenomenon is supported by genealogical data (Boone 1986) and should lead to an asymmetric increase in the population frequency of Y-chromosomes carried by wealthy men, when compared to the other genetic systems.

The motivation for this study was to reconcile the discrepancy between, on the one hand, archaeological and historical ideas about the scale of the Anglo-Saxon immigration (Hills 2003), and on the other, estimates of the genetic contribution of the Anglo-Saxon immigrants to the modern English gene pool (Weale et al. 2002; Capelli et al. 2003). We have shown that this discrepancy can be resolved by the assumption of an apartheid-like social structure within a range of plausible values for interethnic marriage and socially driven reproductive advantage following immigration (Woolf 2004). Perhaps most strikingly, our model indicates that, by using plausible parameter values, the genetic contribution of an immigrant population can rise from less than 10% to more than 50% in as little as five generations, and certainly less than fifteen generations. Similar processes are likely to have shaped patterns of genetic variation in other ‘conquest societies’ of the period, and perhaps more recently (Carvajal-Carmona et al. 2000).

How about the structure and function of genes, chromosomes and genomes?

Discover How You Can Master Your Habits And Reprogram Your Subconscious Brain To Get Any Result You Want In Your Personal Growing and Fulfillment!