Sheldon finds IQ positively related to aesthetic quality (the t component), grip strength, aesthetic intelligence ("the degree to which an individual reveals fine discernment and sensitive appreciation of his environment"), and sexuality ("manifest sexuality, or the relative importance and prominence of the sexual impulse in the individual's history"), and unrelated to masculinity/femininity and central strength ("back and leg lift", essentially deadlift I assume). 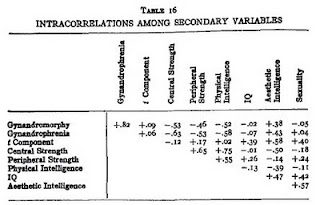 3. Among the Secondary Variables

Table 16 includes the correlations among nine secondary variables. The correlation between gynandromorphy and gynandrophrenia (+.82) suggests that these two factors may be related in the same way, and to about the same degree, that the morphological and temperamental expressions of the primary components are related.

The low correlation between gynandromorphy and t (+.09) indicates that whatever it may be which gives rise to aesthetic excellence in the male body, this phenomenon is not derived to any appreciable extent from the bisexuality factor. Beauty in the female and t component in the male may be comparable or parallel concepts, but it is clear that the latter is not to be explained as a resultant of gynandromorphic linkage. The t concept is not merely a manifestation of femininity. This is a point of some interest since we have found in another (unpublished) study a rather high negative correlation between gynandromorphy (masculinity) and t component in the female.

Gynandrophrenia, like gynandromorphy, seems to be unrelated to the t component. Mentally effeminate men are even weaker than physically effeminate men, and like the latter, they are weaker centrally than peripherally. Gynandrophrenia shows the same relationships as gynandromorphy with the three kinds of intelligence, but all three of the correlations are a little higher. Gynandrophrenes are physically incompetent but aesthetically they are both alert and adaptive. The correlation with IQ(-.07) is too low for significance, as is that with sexuality (+.04), but here we see the same curvilinear relationship to sexuality that is seen in the case of gynandromorphy.

The t component shows a low negative correlation with central strength (-.12), and a low positive correlation with peripheral strength (+.17). Although t is positively correlated with ectomorphy (+.31), it does not appear to be a characteristic associated with physical weakness. The t component is the only variable we have found which correlates positively with all three kinds of intelligence. The correlation between sexuality and t is surprisingly high (+.40), and this seems to contradict the once popular notion that sexuality is vulgar.

Sexuality is correlated negatively with physical intelligence (-.11) but positively with IQ and aesthetic intelligence, and both of these positive correlations are high (+.42 and +.57 respectively).

We find then that the correlational matrix which constitutes Table 16 yields a cluster of four variables among which a strong positive relationship exists. These are t component, IQ, aesthetic intelligence and sexuality. The average of the six intracorrelations among these variables is +.47. This average is lower than that among the traits defining the respective primary components of temperament (p. 400), but it is high enough to be interesting. If a project were set up with the primary objective of defining intelligence, here would be a beginning. This nucleus of traits would not lead to a completely general definition of intelligence, for at least one important element would be omitted, namely that which involves physical skills, but the clearer definition of such a nucleus might contribute to a clarification of what begins to loom as a vital human problem.
Posted by n/a at 5/02/2010 03:16:00 AM