An exhibit from the 1921 second international congress of eugenics shows black-white 2d:4d differences established by the third month of gestation [1]. 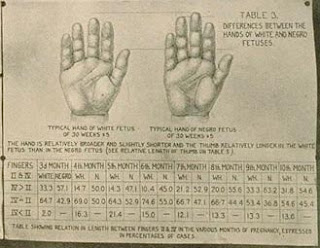 While this bit of evidence does not definitively rule out involvement of androgens in the black-white divergence in digit ratio, it certainly does nothing to quell my doubts about the meaningfulness of cross-racial comparisons of digit ratio for inferring cross-racial differences in prenatal testosterone exposure. The critical windows of androgen exposure for developing males seem to come with mid-gestational and postnatal surges of testosterone to near-adult levels [2]. I'm inclined to believe, rather, black-white differences in digit ratio are due largely if not entirely to genetic factors unconnected to prenatal androgenization. On an entirely unrelated note, a caption above reads:

Coincidentally, according to the second source I cite above (a review article from 2006):

Other differences reported in the 1921 study include smaller brain case and higher frequency of evolution toe in black fetuses (continue reading). 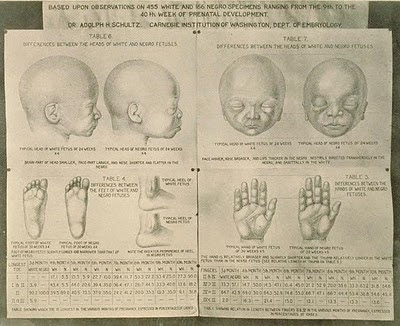 More on the Schultz study [3]:


"Comparison of white and negro fetuses"

An exhibit prepared by Dr. A.H. Schulz of the Department of Embryology, Carnegie Institution of Washington, deals with racial differences during prenatal development of man. It is based upon researches on 455 white and 168 negro fetuses ranging in age from the ninth to the fortieth week of intrauterine life. Fourteen plaster casts of white and negro specimens and ten large table illustrate the chief points of difference in fetuses of the two races and in which periods of development that are most distinct. Of these differences the following may be enumerated:

The average of the upper arm-forearm index for every week of fetal life is larger in the negro than in the white, showing that the forearm in relation to the upper arm is longer in negro fetuses. In an analogous way the leg in relation to the thigh was found to be longer in negro fetuses, a difference which becomes more pronounced with advancing development. The hand as well as the foot is slightly shorter and broader in white fetuses. In the latter, finger II and IV are of equal length in the greater percentage of cases and frequently finger II is even longer than finger IV; while in the negro the relation in length between these two fingers is more often in favor of finger IV and the latter is never shorter than finger II. The length of the thumb in relation to the total hand length is shorter in the negro, a difference which is constant and rather marked throughout intrauterine development. The first toe is the longest in a greater percentage of white than of negro fetuses, while the second toe is longest in a greater percentage in the negro. In the latter race the heel is more prominent than in the white. The trunk shows no racial differences. Of the head, the brain part is proportionately smaller and the face part larger, particularly in height, in negro fetuses. The nose is relative shorter and broader in negro fetuses in all stages of development, causing a very marked difference in the nasal index of the two races. During the later part of pregnancy the nostrils are directed transversely in the negro and sagitally in the white. The lips are much thicker in negro fetuses.

Very interesting how Eugenics always made the African look inferior. I watched a film you might also find interesting which touched on Eugenics and how it targets today the black populations. It is called Maafa21 Black Genocide in 21st Century America- get a clip here: http://www.maafa21.com

There are ethnic differences in digit ratio: populations of
African origin have lower digit ratios than Caucasians,
whereas Chinese populations have higher ratios than
Caucasians (Manning et al. 2004). It is therefore interesting
that the polymorphism in SMOC1 parallels ethnic differ-
ences in digit ratio. Although the frequency of the C allele
at rs4902759 is 0.46 in the European population of the
1000 Genomes project and 0.48 in our own European
sample, its frequency is 0.85 in African populations and
0.19 in Asians (1000 Genomes Project Consortium 2010).

C is the ancestral allele.