Some notes on Sheldon and correlations between physique and personality

A pdf version of William H. Sheldon's 1942 book Varieties of temperament: a psychology of constitutional differences can be downloaded here. A summary of Sheldon's claims and some later work:


Sheldon (1942) claimed to have found strong correlations between somatotype and human behavior.

He posited three fundamental dimensions of temperament, each associated with a component of physique;
Table 1 shows the correlations between temperament and somatotype found by Sheldon (1942).

However, these results were strongly criticized on methodological grounds. Sheldon’s early method of somatotyping, used in the 1942 study, involved a degree of subjective judgment (Carter and Heath, 1990; Cortés and Gatti, 1972; Parnell, 1958) and the ratings of temperament were made by the same researcher (Sheldon) who somatotyped the subjects. Sheldon fully acknowledged this latter point; [. . .]

Nevertheless, constitutional psychology can not be so easily dismissed. For example, there is now a large literature on the relationship between somatotype and a variety of health conditions, including hypertension and heart disease (Singh, 2007). Both Child (1950) and Cortés and Gatti (1965) tried to replicate Sheldon’s psychological findings using more objective somatotyping procedures and self-report measures of temperament. These results are shown in Tables 2 and 3.

Table 2. Correlations between temperament and somatotype reported by Child (p. 447, 1950)

Table 3. Correlations between temperament and somatotype reported by Cortés and Gatti (p. 57, 1972)

While the effect sizes were lower than those found by Sheldon, the pattern of correlations in these studies is essentially the same. There is now a substantial body of research showing weak to moderate correlations between somatotype and such variables as occupational interest (Deabler, Hartl, and Willis, 1975), academic performance (Parnell, 1958), temperament type (Peterson, Liivamagi, and Koskel, 2006), and susceptibility to hypnosis (Edmonston, 1977). Perhaps the most studied behavioral correlate of somatotype is the relationship between criminal behavior and mesomorphy (Cortés and Gatti, 1972; Glueck and Glueck, 1956). In a review of the research, Ellis and Walsh (2000) note that “to date, all studies have reported significant tendencies for delinquents and criminals to be more mesomorphic than persons in general” (p. 278).


On the basis of his work up to now, many workers in the psychiatric field and in the allied sciences of sociology and anthropology are convinced that Dr. Sheldon has done what Hippocrates tried to do 2,500 years ago: he has shown that character and physique are closely related, and that the first, like the second, is to a considerable extent a product of heredity.

[Robert Coughlan. What Manner of Morph Are You? In old debate on what makes temperament a new school of "constitutional psychiatry" gives heredity equal place with environment. LIFE Jun 25, 1951.]

A fan of his work is mortified by Sheldon's political views:


Sheldon in The Varieties of Delinquent Youth ranted about the endomorphic-mesomorphic mothers of the delinquents, and how America had become mongrelized from its original New England Anglo-Saxon origins. But just how much of a racist was Sheldon? Here we can look at the account by John Sample, in "A Closer Look at William H. Sheldon." It certainly looks like Sheldon had become prey to all sorts of fearful and hostile fantasies.

From the aforementioned essay by John Sample:

At the end of our visit, Sheldon said I could look forward to doing "great things." I think he may have said this because I was a reasonably intelligent, clean-cut Wasp! [. . .] He sent me on my way with a copy of American Nazi Lincoln Rockwell’s biography… Those visits ended my personal contact with William H. Sheldon.


William Herbert Sheldon was born in Pawtuxet, Rhode Island, on November 19, 1898. His parents, William Herbert and Mary Abby Greene, were related to old New England families like the Carders and Remingtons. And his father had been well off until a partner in the family firm ran off with the money. William and Mary had lost their first two daughters to diphtheria and then had three more children: Israel in 1889, Kate in 1891, and finally William seven years later. Sheldon's father had been able to keep the family homestead, which dated from around 1740, and supported his family by working as a jeweler in nearby Providence.


William Herbert Sheldon was born in Warwick, Rhode Island, to an old New England family; his father bred poultry and dogs competitively. Sheldon’s early familiarity with the idea of breeding better species, and his sense of the importance of his own Anglo-Saxon pedigree, fed into his lifelong advocacy of eugenics, the program for breeding better humans that inspired his morphological research. Through his father’s tutelage, Sheldon came to recognize what he later termed a t or thoroughbred factor in the human constitution, the quality of appearing aesthetically pleasing.


This page lists some ways to determine body types; "measure your temperament", from the 1951 Life article: 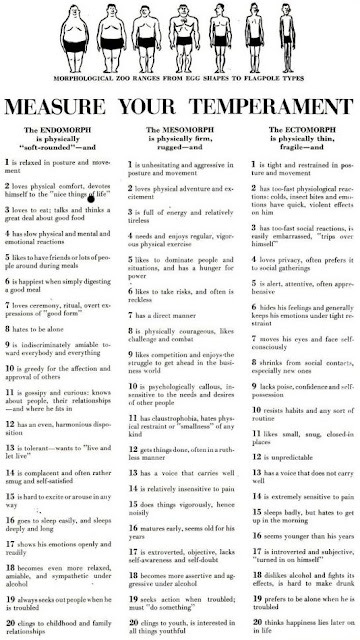 So I wonder...if physiognomy is being scientifically vindicated (at least partially), since Jews so often have ugly faces what does that reveal about the Jewish personality? ;)

Look into the Ancient East Indian system of medicine and health called Ayurveda. It thousands of years old, yet it corresponds to these categories very well.

Google "Ayurveda, doshas". You'll get three body types, all with corresponding attributes. The entire system is based on this.

The stuff is very nice and helpful! Thanks to providing this info.
https://blog.mindvalley.com/william-sheldon/