in response to the separate needs of these races for survival in their own environments. Among those who moved away from the tropics, these needs would be more demanding. The demands thus made would affect, not only the growth of the cerebral cortex, but also the balance of the endocrine secretions, which both accelerate and retard the implementation of the signals flashed out by the reptilian brain.

Coon notes that "growth rates, interaction patterns, rhythms of activity, and physical adaptations to climates are largely governed by inherited patterns of hormonal secretions" and:


For this reason, academically concocted attempts at social engineering, religious conversions, and other programs planned to bend peoples with one style of living into the routines of other races and cultures can be expected to reduce efficiency and create strains and tensions which can be relieved only by reducing any further interference.


There are two principal ways to study such hormonal differences objectively. One is to approach them from without in terms of gross anatomy and observed behavior. The other is to measure them from within, in laboratories, hospitals, and morgues.

In 1922 Sir Arthur Keith pursued the former course, trying to match physical attributes and behaviors with known functions of different glands. He opined that the big-bones Neanderthals were hyperpituitary, as many northern Europeans are; that Mongoloids were hypothyroid, adapted to living with an iodine parsimony; and that Negroes, Australian aborigines, and Melanesians were hyperpituitary and hypoadrenal.

Pygmies might thus be scored as hypopituitary and hyperthyroid, because of their adaptation to a lime-poor, iodine-rich soil. The living Bushmen could be called hypopituitary [. . .]

Phosphorus is one of twenty-six atoms in the epinephrine (adrenaline) molecule, the others all being hydrogen, carbon, and oxygen, as in the other steroids. It is low in deserts and in tired agricultural soils that have not been manured or treated with phosphates. As it is linked to calcium in bone building, rice-eaters and maize-eaters who consume little or no meat suffer from its deficiency, both in growth and in the stimulus it gives the brain and muscles in moments of emergency, when epinephrine constricts blood vessels, dilates eye pupils, flushes faces, and rapidly feeds the appropriate sugars to the brain and muscles. In Nei and Roychoudhury's study the acid phosphate content of Caucasoid codons was found to be significantly greater (p = 0.0001) than those of Negroids or Mongoloids. Hyperthyroid peoples, like some of the Caucasoids, respond faster to unpleasant stimuli than do hypothyroid peoples, who pause for a while, become nervous, and then react explosively. Those of us who have faced mobs of different races and have survived know this well.

Coon next discusses a study of endocrine gland weights (Walter Freeman, "The Weight of the Endocrine Glands," Biometrical Studies in Psychiatry, no 8, Human Biology 6 (1934):489-523). I reproduce the relevant table here: 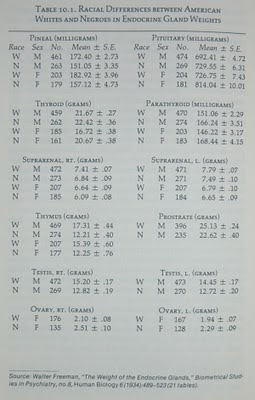 According to Coon, with or without correction for differences in body weight:


the whites significantly exceeded the Negroes of both sexes in the pineal weight, and the Negroes of both sexes exceeded the whites in pituitary weight. One would expect this result from the relationship between retinal color and the secretion of melatonin versus that of the melanosome-stimulating hormone (MSH) discussed in chapter 4, despite the fact that both glands have several other functions.

Male Negroes' thyroids equate with those of white males, while Negro women's thyroids are significantly heavier than white women's. Both Negroes and Caucasoids are (in Keith's sense) hyperthyroid. In Negroes this gland's secretions may or may not stimulate quick reactions, while in fair-skinned whites they may alert the brain to decisions to be made after a pause for deliberation.

The parathyroids, which have to do with storage and release of calcium, affecting particularly bones and kidneys, are heavier in Negroes than in whites, possibly because their bones are denser.

The suprarenals, our sources of adrenaline, are virtually equal among both races [. . .]

The thymus is much heavier in whites than in Negroes. [. . .]

In the whole genital complex of prostate and testes, or ovaries, white males outweigh Negro males, and Negro females outweigh white females. All these differences are significant, even when we grant the Negro males their 5 percent bonus for having lighter bodies, but we must remember that the testes secrete testosterone as well as semen, and the brew of testosterone is virility. Melatonin, in addition to its function in the brain, also quantitatively affects the gonads.

In the only other autopsy study I'm aware of (the preliminary study mentioned in J Androl. 1998 May-Jun;19(3):348-57; see excerpt at the bottom of this post), white men also had significantly heavier testes than black men (although the difference was not statistically significant due to small sample sizes). Many of Rushton's claims concerning the reproductive organs are wrong or exaggerated. But racial differences in dizygotic twinning are driven entirely by maternal factors and more generally I expect hard biological limits on fertility to be primarily a function of female (rather than male) reproductive physiology, so the finding that black women have heavier ovaries than white women is all that's really needed to keep Rushton's r/K theory alive in some form.


When we compare the endocrine weights of Freeman's white and Negro cadavers of both sexes, we find more similarities, comparable to fingerprint patterns, than we do differences. The greatest differences center around the parathyroids, which regulate bone density and which is greatest in the Negroes, and the pineal and pituitary which, in obedience to skin color, are concerned with reaction speed in concert with the adrenal glands. The Negro's excellence in leaping, jumping, and fast running for short distances are partly neurological and partly anatomical. Their short duration of high activity may depend in part on their hemoglobin levels, which are lower in Negroes in Africa and America than they are in whites.

When Keith diagnosed the Australian aborigines, Melanesians, and African Negroes as hypoadrenal, he may have been mistaken, at least in the case of the Negroes, since their suprarenal glands are almost as heavy as whites'. It would be surprising if they were not, for the Negroes are just as capable of violence and anger as whites are. So, apparently are the Australian aborigines and the people of Melanesia.

What may lie behind Keith's designation is the time it takes between warning signal and reaction--the delayed response to unexpected dangers--that may leave Negroes vulnerable for a few seconds, unlike the faster responses of dark-skinned Caucasoids such as Arab traders or Hindu shopkeepers.

While dissecting the brains of some American Negroes of apparently pure African descent, both R. B. Bean and Cornelius J. Connolly found a relatively small and delicately fibered prefrontal region, comparable to a certain degree to that of the Broken Hill endocast. Because this is an area of decision, those that have it may take their time in responding to the stimulus with an angry outburst.

[. . .] Shellshear has recorded the same prefrontal simplicity in Australian aborigine brains, and a drawing of a Papuan brain in Spitzka's magnum opus indicates a comparable simplicity of the cerebrum as a whole.

Our coverage of the gland weights of peoples other than American blacks and whites is scanty, sporadic, and without surprise. Japanese thyroids average 13.8 grams versus 29.8 grams for Europeans. The latters' kidneys, with or without their adrenal glands, average 313 grams; Negroes', 308; Chinese's, 275; and Malays' 210. Germans' testicles are heavier than Malays', both absolutely and in relation to body weight, as shown below.

Testosterone continues to be secreted well after impotence imposed by old age. It is an element in aggressiveness, territoriality, and hoarding. Blended with adrenaline and smoothed over with cool judgment, it has marked the history of the Caucasoids in many parts of the world.

I see that you have been addressing racial endocrinology for some time, and you even very briefly addressed the racial differences in CAG repeats in the androgen gene. However, there does seem to be a significant amount of the literature that you are not addressing, which I summarized here. For instance, you do not consider racial differences in transient testosterone peak responses, which Roney et al recently associated with the number of CAG repeats. CAG repeats are linked to both race and violent crime. One early study suggested that African Americans have an average number of CAG repeats that just about equals the average number of repeats that a recent study quantified for rapists.

Thanks for the pointers to additional research. But looking at the Roney paper, I don't think it changes much. First, it offers no direct racial comparison (the sample is 66% white and 1% black). Second, while it might be reasonable to predict that since blacks average fewer CAG repeats they would have shown larger testosterone spikes (although it's still just a prediction), the paper shows that the size of the transient peaks is primarily a function of baseline testosterone levels. The delta r-squared is 0.53 for log baseline testosterone vs. 0.05 for CAG repeat number and log baseline cortisol.

Black-white differences in IQ explain most of the black-white difference in criminality. Blacks commit violent crimes at about 3 times the white level, but commit property crimes at about 5 times the white rate (I'm looking at tables 9 and 10 in the 2005 Color of Crime report). Looking specifically at rape, the multiple is around 3 (versus 15 for robbery and over 12 for drug offenses).

Blacks commit violent crime at far higher than 3 times the white level. You're using the hispanic numbers for blacks. The murder rate amongst blacks is just over 10 times that of whites.

You're right; I apparently looked at the Hispanic instead of black bar for the overall violent crime incarceration rate. The rape, robbery, and drug offenses multiples are correct.

In terms of violence and property destruction and theft, whites are the leaders on the planet followed by Asians. Let's put the WHOLE picture on the table. Too often HBDs want the definitions and categories, and subsequent manipulation of data THEIR way. But when the WHOLE record of 'racial' (some doubt here as to the biological existence of 'races' but that's another story- numerous scientists dispute the notion) behavior is analyzed, then whites are "leaders" in theft (the expropriated lands of non-Europeans) and violence as the mass graves of the Gulag and the ovens of Dachau attest). The convenient categories and statistics don't only go one way..

Show us the data. You talk about showing the 'whole picture' go on then, show it.

Rwandans committed the worst genocide per capita in history...using machetes. Imagine what it would be like if they had advanced technology.

"Those of us who have faced mobs of different races and have survived know this well."

I like how Coon, the Ivy League professor, manages to frequently sneak in references to the remarkable number of violent situations he got himself into, including fistfights.