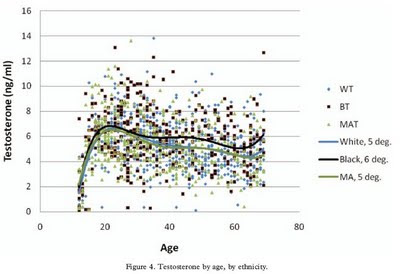 I do agree with White that you seem like an anti-semite.

However, you're far more objective, intelligent, and better at supporting your arguments than him.

It's a bit of a nit, but if you are testing the joint hypothesis that high-T and criminality are perfectly correlated and that there are black-white diffs in T (accounting for the b-w diffs in crime), NHANES III is a terrible place to do the test, because, quoting the CDC website describing the survey: "The NHANES III included the civilian noninstituionalized population of the conterminous United States."

Noninstitutionalized means, among other things, that no prisoners are in the sample.

The hypothesized perfect correlation between T and crime would mean that the high-T people of each race are in prison and therefore not in the sampling frame of the survey, which would dramatically reduce the measured difference in T, perhaps all the way to zero.

Of course perfect correlation is a stupid hypothesis. If the correlation were to be imperfect, the measured difference would be biased down, but likely not all the way to zero.

It's a bit like measuring differences in academic ability by comparing SAT scores of blacks and whites with degrees in electrical engineering from the same school.

Fair point, but the vast majority of people who have or will serve time are not currently in prison. Going by the DOJ page linked in my post, it looks like about 1/8 of those who have been or will be in prison were in prison in 2001.

And, of course, if this were a major factor and the T=crime=black equation were correct, we would expect to see the largest racial T differences among the youngest participants (since future criminals will have had less opportunity to be removed from the non-institutionalized population); but we see the opposite.

There does seem to be higher levels of testosterone in SOME (not ALL) West African males, at least some of the ones in the USA and in the Western hemisphere that were brought here as slaves. The physical evidence is clear: some West African males have more natural muscularity, deeper voices, and often larger penises - all suggest higher testosterone levels than average.

However, this could also be due to the fact that some groups of African slaves were bred eugenically (like horses, cattle, dogs, etc) by certain slaveowners specifically for traits that would allow them to work harder on their plantations.

“Moreover, Mazur finds no racial differences in T among adolescents (consistent with the findings of a larger study of adolescents).”

“Black-white T differences increase with age (in Mazur's plots, they appear minuscule before the age of about 30), perhaps due in part to differences in mortality”

Peter Frost stated that testosterone levels are higher in blacks than in whites during adolescence and early adulthood (up to the early 30s) in your last debate with him. Are you saying now that this is actually not true?

"Are you saying now that this is actually not true? "

That's what this study is saying. On the other hand, Mazur's analysis of a sample of Army veterans found significant differences only between young, poorly educated blacks and whites (here is an explanation he proposed for this result).

NHANES should provide the more representative sample. Regardless, I don't think the evidence has ever been strong or consistent in favor of the belief of Peter Frost that you mention.

Some other theorising on crime & biology.

"MAO-A inhibits the production of catecholamines, in particular serotonin. Persons low in MAO-A tend to be low in serotonin.

Persons low in serotonin have elevated rates of impulsive violent behavior, including homicidal and suicidal attempts and successes. These studies have been done on successful suicides and impulsively violent criminals behind bars. Serotonin is an inhibitory chemical. It follows that low levels of an inhibitory chemical would make a person less inhibited in some ways."

" Widom and Brzustowicz did not prove that MAOA acts differently in non-whites. They only included 98 non-white males in their study. In contrast, Huang et al included 110 blacks, 10 Asians, 79 Hispanics, and 8 “other.” Huang et al found that MAOA influences impulsivity. Beaver et al included 383 blacks and 1484 whites, and they found that MAOA influenced violent behavior. Weder et al included just 58 black and biracial subjects, but they found that the MAOA-environment interaction effect on aggression was significant specifically in that group. Of course, all these studies have somewhat low power, but the point is that Widom and Brzustowicz did not prove MAOA acts differently in non-whites. Even within their tiny 98-subject group of non-whites, they claimed that a sub-group of blacks also lacked a significant gene-environment interaction effect. They did not bother to offer numbers for how many of these mere 98 non-white males were black, even though a significant portion of the subjects were from a previous study in which 98% of the non-whites were white or black. They were hiding this information because their data suggest that blacks, compared to whites, have an order of magnitude more of the 2-repeat MAOA VNTR, which is far more likely to predispose to violence than the 3-repeat allele that earned MAOA the “violence gene” label."

A word from a European political scientist: whilst certainly this discussion is interesting, the correlation here is pseudo-scientific. The law, i.e. the way that people end up in prison, is not colour-blind (the American law on drug use is, for example, tailored so that sentences for drugs used typically by blacks are more severe and blacks are stopped and searched far more often than whites, which all impact the statistical probability of people of different phenotype ending up in prison). That is, criminality is a problematic variable to be treated statistically because it is influenced by shifthing concerns and policies.

the American law on drug use is, for example, tailored so that sentences for drugs used typically by blacks are more severe

I generally hold the libertarian position on drugs so I'm not going to defend drug laws but how is it racist if blacks are choosing to do hard drugs that net longer sentences? Nobody is forcing them to do drugs or to specifically do the sort of drugs that get them into prison longer.

blacks are stopped and searched far more often than whites

You're wanting us to believe that the explanation for differences in the rate of stops and searches of blacks is solely due to racism on the part of police officers.

Even if we assume there is some amount of racism among police officers, which I can believe to a limited extent, a reasonable non-brainwashed person knows that black neighborhoods are crime-ridden hellholes, therefore it's not at all unreasonable to suggest that most of these stops are actually legitimate any any claims of racism are likely extremely overblown.

What a strange american nonsense