I was alerted to this study through a post by one of gnxp's competent (i.e., most likely white) posters, and I haven't yet read it. The findings appear to be similar to those of the study released earlier this month (I would guess--based on another recent paper by some of the same authors--they even use some of the same samples). But there are a few new data points: samples from Latvia, Russia, Ukraine, Cyprus, and Turkey show up in the plot. Contrary to the speculation of some, Balts and Russians appear to be even more distant than Finns on PC2, rather than intermediate between Finns and other Europeans.

Update: Per the supplementary material, the sample sizes for Finland, Slovakia, and Ukraine are only 1 each, and 6 for Russia. 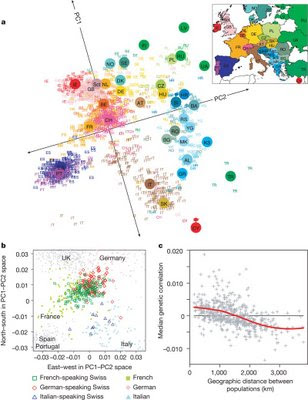 Understanding the genetic structure of human populations is of fundamental interest to medical, forensic and anthropological sciences. Advances in high-throughput genotyping technology have markedly improved our understanding of global patterns of human genetic variation and suggest the potential to use large samples to uncover variation among closely spaced populations1, 2, 3, 4, 5. Here we characterize genetic variation in a sample of 3,000 European individuals genotyped at over half a million variable DNA sites in the human genome. Despite low average levels of genetic differentiation among Europeans, we find a close correspondence between genetic and geographic distances; indeed, a geographical map of Europe arises naturally as an efficient two-dimensional summary of genetic variation in Europeans. The results emphasize that when mapping the genetic basis of a disease phenotype, spurious associations can arise if genetic structure is not properly accounted for. In addition, the results are relevant to the prospects of genetic ancestry testing6; an individual's DNA can be used to infer their geographic origin with surprising accuracy—often to within a few hundred kilometres.


These authors also develop a model that does reasonably well at predicting the country of origin of an individual based on genetics alone.
[ . . .]
The method the authors develop for predicting an individual's country of origin from genetics are only a beginning for this kind of application of genetic data. They note that the SNP chip used in the study only includes common variation, while rare variants are likely to be much more geographically restricted (and thus more informative in this kind of analysis). The limits to the resolution of these sorts of methods are likely to be very fine indeed; the authors note that, even with this panel, they're able to distinguish with some confidence individuals that are from the German, Italian, and French-speaking parts of Switzerland. With full resequencing data, it's likely that even the precise village of origin of an individual will be predictable from genetics alone.

After all these recent papers about European genetic structure, does anyone still believe that the Irish and Brits sprung from a lost colony of Iberian "Meds"?


After all these recent papers about European genetic structure, does anyone still believe that the Irish and Brits sprung from a lost colony of Iberian "Meds"?

@zib: If only it were that easy. Some being which styles itself "Unique" looks at (i.e., completely ignores) these results and somehow manages to come up with this:

Interestingly the genetic maps are confirming irish/Celtic legends about the migrations from Spain, the Milesian migration as somewhat accurate. i like that genetics is forcing us to look at history in new ways showing how we are often more alike than imagined and also showing that we are not all the same. Thats not good not bad it just is.

Going back at least as far as The History and Geography of Human Genes, it's always been clear that autosomally there is no special connection between the Irish and Iberians. But those who want to believe otherwise will remain relatively impervious to facts.