There is none that I can see.

Previous studies based on genome-wide SNP diversity reported differences between individuals of southern and northern/central European ancestry [3, 5, 6] and, to a lesser extent, between those of eastern and western European ancestry [3], which were not confirmed in our study.

However, looking at the earlier studies cited and comparing like to like, the picture is broadly similar: the main axis of genetic variation in Europe is North-South; Greeks and Italians are cleanly separable from Northern Europeans. The N-S gap is bridged somewhat by central Europeans and Iberians, but (unmixed) Iberians in particular are numerically insignificant in the U.S. 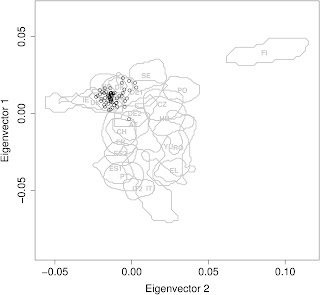 Regardless of whether genetic variation is "clinal" or "clustered" within Europe, America's Northern European majority is genetically distinct from its southern Italian minority.

The image at left shows Utah whites (the "CEU" HapMap population) overlaid on the PCA plot of European populations generated by Lao et al. Clearly, Utah whites are not going to be confused with Italians, "small" differences or not.

As discussed elsewhere, the "UK" sample is a reference sample from London and likely contains many individuals with Irish, Welsh, and Scottish forebears. It should not be taken as representative of the English, or used as the basis for arguments about the genetic impact of historical migrations.

The People of the British Isles project should allow finer-scale comparisons within northwestern Europe.

To determine the genetic patterns across the British Isles, we will use genetic “markers” to look at every individual sample. One might expect, for example, to find fewer genetic differences between people in Cornwall and Devon than Cornwall and the Shetlands because, historically, there has been less movement between the more distant counties.

Once these genetic patterns have been identified, it should also be possible to use them to investigate historical patterns of movement within the UK. As well as this, comparison of these patterns with results from other populations that surround the UK, such as the Scandanavians, French and Germans, should help us to understand the impact they have had on the British over the Centuries.

What we plan to do is collect blood samples from between 100 and 150 people from about 30 different rural regions throughout the UK. To try and make sure that the sample is representative of the area throughout the ages, we are looking for people whose parents and grandparents were all born in the same locality.

The goal is 3500 samples, of which the project website reports 3294 have been collected. According to the May 2008 newsletter (pdf):

We are currently in the process of analysing our data from the latest round of genotyping and hope to report the results later on this year.