The perceived associations of the participants in this study are reminiscent of--though not identical to--the associations argued for by Sheldon.


Through the use of many photographs and measurements of nude figures (mainly Ivy League students), Sheldon assigned people into three categories of body types in the 1940s: endomorphic, mesomorphic, and ectomorphic. He also assigned personality traits to the body types as well. Endomorphics had fat, soft, and round body types, and their personality was described as relaxed, fond of eating, and sociable. Mesomorphics were muscular, rectangular, strong, and personality-wise were filled with energy, courage, and assertive tendencies. Ectomorphics were thin, long, fragile, as well as brainy, artistic, and introverted; they would think about life, rather than consuming it or acting on it. 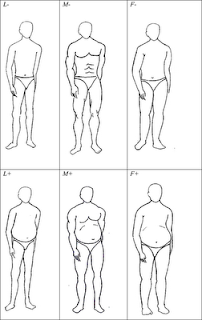 Obesity as a Perceived Social Signal

Fat accumulation has been classically considered as a means of energy storage. Obese people are theorized as metabolically ‘thrifty’, saving energy during times of food abundance. However, recent research has highlighted many neuro-behavioral and social aspects of obesity, with a suggestion that obesity, abdominal obesity in particular, may have evolved as a social signal. We tested here whether body proportions, and abdominal obesity in particular, are perceived as signals revealing personality traits. Faceless drawings of three male body forms namely lean, muscular and feminine, each with and without abdominal obesity were shown in a randomized order to a group of 222 respondents. A list of 30 different adjectives or short descriptions of personality traits was given to each respondent and they were asked to allocate the most appropriate figure to each of them independently. The traits included those directly related to physique, those related to nature, attitude and moral character and also those related to social status. For 29 out of the 30 adjectives people consistently attributed specific body forms. Based on common choices, the 30 traits could be clustered into distinct ‘personalities’ which were strongly associated with particular body forms. A centrally obese figure was perceived as “lethargic, greedy, political, money-minded, selfish and rich”. The results show that body proportions are perceived to reflect personality traits and this raises the possibility that in addition to energy storage, social selection may have played some role in shaping the biology of obesity.

Email ThisBlogThis!Share to TwitterShare to FacebookShare to Pinterest
Labels: physiognomy