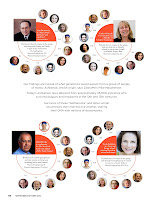 In September, Moment Magazine got all nerdy and wrote about their Great DNA Experiment, in which they look at the 23andMe results of 15 notable Americans of Jewish ancestry and make some interesting genetic connections. It’s a good illustration of how our DNA can tell us about our interconnectedness.

The piece shows it’s not “six degrees” that separates these individuals from each other, but, in all but one case, no degrees of separation. This means that these individuals are all directly related to one another, albeit in most cases distantly. This was also news to the 15 participants.

All but one of the individuals has Ashkenazi Jewish ancestry. The one exception is Linda Chavez, the political commentator, who descended from Conversos, indivduals of Jewish and Muslim ancestry who converted to Catholicism during the Inquisition. Her ancestors eventually settled in New Mexico. But even in her case, although she isn’t directly related to any of the group, she is connected to each of the others individuals focused on in the piece by just one other individual in the 23andMe database.

The connections shown in the article are what prompted The New York Times columnist David Brooks and NPR “All Things Considered” host Robert Siegel to joke about learning they were distant cousins, sharing a common ancestor several generations back. Brooks kidded that he was “most surprised that our ancestors worked together on National Schetl Radio, on a program called ‘All Pogroms Considered.’” (Maybe the line needs a drum roll to work.)

The article shows the genetic connections between people like Mayim Bialik, the actress on the Big Bang Theory, and Stephen Dubner, co-author of Freakonomics. Or the connections between NPR’s Siegel, and Harvard Law professor, Alan Dershowitz, or his connections to 23andMe’s CEO’s mother Esther Wojcicki, a journalist and teacher. The magazine shows the connections and the amount of shared DNA, measured in centimorgans (cMs), to illustrate the “relatedness” of any two individuals. More closely related individuals share more DNA.

In the full article at the Moment Magazine website we also learn, for example, that Stephen Dubner's "first cousin once removed was Ethel Greenglass, wife of Julius Rosenberg", or that "Esther Wojicki's maternal-grandparents gave each of the boys among their 13 children a different surname in order to help them avoid conscription in the Russian army".

Our findings are typical of what geneticists would expect from a group of people of mostly Ashkenazi Jewish origin, says 23andMe's Mike Macpherson. Today's Ashkenazi Jews descend from approximately 25,000 ancestors who survived plagues and massacres in the 12th and 13th centuries. Survivors of these "bottlenecks" and other similar occurrences then married one another, sharing their DNA with millions of descendants. 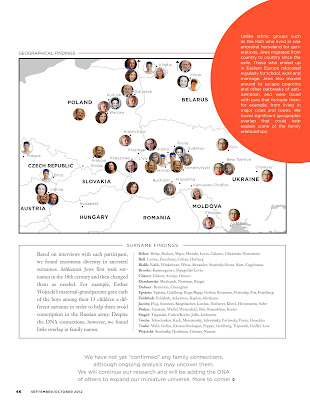 "Today's Ashkenazi Jews descend from approximately 25,000 ancestors who survived plagues and massacres in the 12th and 13th centuries."

How does that reconcile with this: "Between 800 and 1100 there were 1.5 million Jews in Christian Europe" (wiki)? That's a pretty severe, recent bottleneck.

If the wiki figure is correct, and if the article is correct, then 98.3% of the European Jews alive at the time of the First Crusade have no descendants alive now. How can that be? What is the comparable figure for ethnic-Europeans?

A recent study by Palamara et al. in AJHG (first link, pdf available for free) claims to find evidence of a severe reduction in effective population size followed by expansion among the ancestors of Ashkenazi Jews. Dienekes briefly discussed this paper on his blog (second link).

@hailtoyou
pogroms, which caused a lot of Jews to move to eastern Europe... and then holocaust procured by Germans, which in case of Polish Jews destroyed more than 90% of them.

The magazine article specifies Ashkenazis, while the wiki article is probably referring to all Jews in Europe. Only a small proportion of Jews at that time were Ashkenazis.

"Although the Jewish people in general were present across a wide geographical area as described, genetic research done by Gil Atzmon of the Longevity Genes Project at Albert Einstein College of Medicine suggests "that Ashkenazim branched off from other Jews around the time of the destruction of the First Temple, 2,500 years ago. flourished during the Roman Empire but then went through a 'severe bottleneck' as they dispersed, reducing a population of several million to just 400 families who left Northern Italy around the year 1000 for Central and eventually Eastern Europe."[33]

With the onset of the Crusades, and the expulsions from England (1290), France (1394), and parts of Germany (15th century), Jewish migration pushed eastward into Poland, Lithuania, and Russia. Over this period of several hundred years, some have suggested, Jewish economic activity was focused on trade, business management, and financial services, due to several presumed factors: Christian European prohibitions restricting certain activities by Jews, preventing certain financial activities (such as "usurious" loans)[34] between Christians, high rates of literacy, near universal male education, and ability of merchants to rely upon and trust family members living in different regions and countries." (Wiki).

"n an essay on Sephardi Jewry, Daniel Elazar at the Jerusalem Center for Public Affairs[8] summarized the demographic history of Ashkenazi Jews in the last thousand years, noting that at the end of the 11th century, 97% of world Jewry was Sephardic and 3% Ashkenazi; in the mid-17th century, "Sephardim still outnumbered Ashkenazim three to two", but by the end of the 18th century, "Ashkenazim outnumbered Sephardim three to two, the result of improved living conditions in Christian Europe versus the Ottoman Muslim world."[8] By 1931, Ashkenazi Jews accounted for nearly 92% of world Jewry.[8]" Wiki)

Exponential Ashkenazi population growth occurred in the 18th adn 19th centuries. The introduction of potato cultivation played a role. The early 18th century was also a period of recovery after the Khmelnitsky massacres and the Shabtai Tzvi false messiah affair. There may have been a desire to rebuild and recover maifested in large families. One sees something similar among the ultra-Orthodox today in relation to the Holocaust.