Was there ever a Ruling Class? 1000 years of Social Mobility 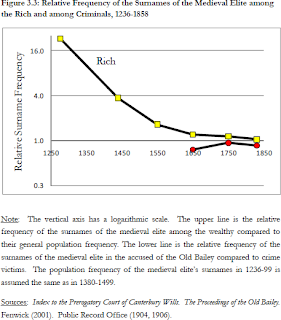 According to Gregory Clark, because of regression to the mean and the lack of any (e.g., racial) barrier preventing gene flow across classes, there was never a persistent ruling class in England.

Notes from a presentation by Clark last year containing "work in progress from a planned book on social mobility over the long run" (pdf):

What is the fundamental nature of human society? Is it stratified into enduring layers of privilege and want, with some mobility between the layers, but permanent social classes? Or is there, over generations, complete mobility between all ranks in the social hierarchy, and complete long run equal opportunity? [. . .]

This book systematically exploits a new method of tracing social mobility over many generations, surnames, to measure the persistence of classes over as much as 800 years, 24 generations. It looks at societies where surnames are inherited, unchanged, by children from fathers. In such cases they thus serve as a tracer of the distant social origins of the modern population (and interestingly also as a tracer of the Y chromosome).

In this role surnames are a surprisingly powerful instrument for measuring long run social mobility. The results they reveal are clear, powerful, and a shock to our casual intuitions.

(1) In England, where we can trace social mobility back to 1066 using surnames, there were never any long persistent ruling and lower classes for the indigenous population: not in medieval England, and not now. About 5-6 generations were, and are, enough to erase most echoes of initial advantage or want. For the English class is, and always was, an illusion. Histories such as those of the Stanley family turn out to be rare exceptions, not the rule.

(2) Paradoxically, while England reveals complete long run mobility, the rates of social mobility per generation, better measured by looking over multiple generations, turn out to be lower than is conventionally estimated. But the mathematics of mobility is such that even such slow regression to the mean, over time, will completely erase initial advantage and want.

(4) The extraordinarily complete long run mobility of England is likely typical of other western European societies. But other countries, in contrast, do exhibit persistent social classes over hundreds of years. In the US, for example, the Black population has persisted at the bottom of the social order, and the Jewish population at the top. In Chile surname evidence shows the indigenous population has remained at the bottom since the Spanish conquest of 1541. [. . .]

(7) Though parents at the top of the economic ladder in any generation in preindustrial England did not derive any lasting advantage for their progeny, there was one odd effect. Surname frequencies show was that there was a permanent increase in the share of the DNA in England from rich parents before 1850. After 1850 a frequency effect operated, but in reverse. Surname frequencies show the DNA share of families in England who were rich in 1850 declined relative to that of poor families of the same generation by 2010. [. . .]

What is the meaning and explanation of these results? This is a much more contentious and difficult area. The book argues for the following conclusions:

A. Why can’t the ruling class in a place like England defend itself against downwards mobility? If the main determinants of economic and social success were wealth, education and connections then there would be no explanation of the consistent tendency of the rich to regress to the society mean. Only if genetics is the main element in determining economic success, if nature trumps nurture, is there a built-in mechanism that ensures the observed regression. That mechanism is the intermarriage of the rich with those from the lower classes. Even though there is strong assortative mating, since this is based on the phenotype created in part by chance and luck, those of higher than average innate talent tend to systematically mate with those of lesser ability and regress to the mean.

B. Racial, ethnic and religious differences allow long persisting social stratification through the barriers they create to this intermarriage. Thus for a society to achieve complete social mobility it must achieve cultural homogeneity. Multiculturalism is the enemy of long run equality.

We can even push back the study of mobility in medieval England to 1066 using surnames. In particular the Domesday book of 1086, and associated charters and other documents, allows us to identify a subset of English names which are of Norman origin only, and which were held by the new ruling class installed by William I (Keats-Rohan, 1999). These names include such well known English names as Balliol, Baskerville, Darcy, Glanville, Lacy, Mandeville, Percy, Sinclair, and Venables. Most of these names were drawn from the home village of a member of William’s invasion force in Normandy, Brittany or Flanders. Thus Baskerville is from the village of Bacqueville in Normandy, Venables from Venables, Ivry from Ivry-la-Bataille. As the ruling class imposed by force in 1066, how quickly was this group assimilated into the general population in medieval England?

A group of 236 names of this form was compiled. The frequency of these names in the later medieval population (1368-1449) was estimated at 0.9 percent based on a sample of enrollment lists for English armies and garrisons. What was the relative representation of this conquering elite at Oxford university by the thirteenth century, assuming their name share in the general population was 0.9 percent? Figure 3.4 shows this by 20 year periods from 1180. In the thirteenth century these surnames were on average three times as frequent at the university as in the general population. However, their representation fell rapidly in the fourteenth century, so that by the late fourteenth century these names were only about 10 percent more common at the university than in the general population. This would seemingly imply that the Domesday elite of 1086 had by 1350, less than 300 years later, descended in status on average to the level of the general population. But we shall see that there is contradictory evidence in this case. Among the fighting elite of 1368-1449 the names of these original Norman warriors continue to be greatly overrepresented.

If Gregory Clark's work were a woman, I would... try to have sex with it?

I have long thought that English perceptions of class mobility, and being a class ridden society, to be more the product of a cultural resistance to "power distance" (and the wake of the modern industrial revolution), rather than from actual distinctiveness in the worldwide picture.

A caveat for me would be that I'm not sure how we can have the same class mobility for a society that is largely peasant farmer as compared to one with a larger mix of social classes. I don't really get how that works.

I have heard that the Hindus have no history of documentating pretty much anything much in their societies prior to and outside the sphere of various forms colonisation - if true that would be a shame, as it would be fun to run a comparative exercise on them, to test the permanence of their caste system, economically.

Farewell to Alms was a good book, but at times disappointing. For instance, after Clark demonstrats that the English escape from the Malthusian trap was at least in part genetic, he then, at the end of the books, recommends mass immigration into England. Talk about a major contradiction. I hear that Clark is getting better, however.


There have been other recent studies of other European countries showing that the modern populations are largely descended from the Medieval upper classes.

It's noteworthy that throughout history, the aristocracy / upper classes of Europe have been described as very fair skinned. Princesses in fairy tales are always described as "fair," and the very notion of "blue blood" denotes fair skin. People who were tan / swarthy were considered lower class.

Historians in the past attributed this to the Volkerwanderung (that nearly all the modern aristocracies in Europe are Germanic) but the idea of the fair-skinned aristocracy existed in ancient Greece and Rome too. And it is probably a matter of selection. Fair skin probably denotes health among all non-Africans so it was heavily selected for, esp. among the upper classes in Europe.

People who were tan / swarthy were considered lower class.

They also kicked the blue-bloods' asses around Europe for a few centuries. Then sold their descendants all over the Mediterranean. Who the fuck are you kidding with this but yourself?

Fair skin probably denotes health among all non-Africans so it was heavily selected for, esp. among the upper classes in Europe.

Have you ever SPOKEN to men of other races? You know, the kind who work outside all day. Of health they have plenty. Might it not be that those precious blue-bloods you worship, being exempt from WORK, didn't tan or build muscle? Fox-hunting and duello aren't digging ditches and splitting firewood!

I wonder if any "blue bloods" had a hand, I mean a real hand attached to a moving arm, in the building of all the cathedrals and monuments you guys idolize. I'm guessing brawnier men with black hair on their forearms and dirt under their fucking fingernails did most of the work, then went to the village in for five or six pints. Whatever the country.

Were is the evidence that the elite were light skinned?

^ within Europe that is.

All working just as hard or harder in blue-collar jobs than your swarthy, black-haired hero.

I like how you weaseled in "or harder" — betraying who is the real hero worshiper here. I merely redress the imbalance brought to this by you petty nordophiles. Do remember that Bavarians and many Swedes, and well every other nation, are part swarthy. All I mean to say is that you are purblind to reality. You need to go to Colombia and watch some common laborers at their jobs, nude to their waist, dark and cut as fine wood, uncomplaining and the picture of mental health. And what about the Chinese? would our great mulatto stud farm be an empire without the Cantonese workers that laid all the railroad out West? But, only Nords can be hard-working. Only Nords are the model of health to everyone else. Health is pale or pink skin, very light eyes and hair. Nothing else; no other human feature betokens or suggests a healthy frame and ability to work hard. Forget all the great agricultural civilizations. The lean, tanned, short bodies of men made pack-animal by the hundred-thousand: all that matters is the Nordic fetish. A tan, why, that's a few generations from melanism!!!

You need to go to Colombia and watch some common laborers at their jobs, nude to their waist, dark and cut as fine wood

The lean, tanned, short bodies of men made pack-animal by the hundred-thousand: all that matters is the Nordic fetish. A tan, why, that's a few generations from melanism!!!

Excellent stuff. Thanks for posting.

Such as Mike Holmes the famous contractor with a heart and TV celebrity that helps people fix their homes when other swarthoid swindlers have overcharged them and left their house a mess.

"There have been other recent studies of other European countries showing that the modern populations are largely descended from the Medieval upper classes."

Not the aristocracy, artisans.

not peasants but not upper class either