The races of mankind: an introduction to Chauncey Keep Memorial Hall (1933) 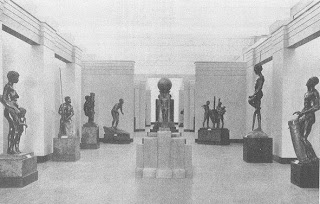 The booklet for the Field Museum's Hall of Man exhibit (which Steve Sailer wrote about in "Racial Correctness: The Case Of Malvina Hoffman"). From the introduction by Sir Arthur Keith:


To explain satisfactorily the racial problems so realistically and so truthfully presented to us in this hall, we have to accept as a truth the prevalence of the laws of evolution in the world of humanity.

Fittingly, the work was digitized as part of archive.org's Biodiversity Heritage Library. About the author: "Henry Field was a Field Museum Assistant Curator of Physical Anthropology and a nephew of Marshall Field, the department store magnate who helped start The Field Museum and after whom the museum is named." Field Museum benefactor "Marshall Field was born on a farm in Conway, Massachusetts, the son of John Field IV and wife Fidelia Nash. His family was descended from Puritans".
Posted by n/a at 4/28/2010 02:11:00 AM

They're currently re-displaying Malvina Hoffman's works at the Field Museum, but, and I quote (from the member magazine), "[A]lthough the statues are now restored to their original appearance, curator of North American Collections Alaka Wali, PhD, did not want to restage the original 1933 exhibition. Instead, she wanted to critique its fundamental message: that people can be scientifically classified into distinct races using physical features."

This is the antithesis of natural science, which classifies insects, clouds, matter, rocks, and any and everything else based on physical features.

All of your accomplishments are being undone.