The ratio of the lengths of an individual's second to fourth digit (2D:4D) is commonly used as a noninvasive retrospective biomarker for prenatal androgen exposure. In order to identify the genetic determinants of 2D:4D, we applied a genome-wide association approach to 1507 11-year-old children from the Avon Longitudinal Study of Parents and Children (ALSPAC) in whom 2D:4D ratio had been measured, as well as a sample of 1382 12- to 16-year-olds from the Brisbane Adolescent Twin Study. A meta-analysis of the two scans identified a single variant in the LIN28B gene that was strongly associated with 2D:4D (rs314277: p = 4.1 x 10(-8)) and was subsequently independently replicated in an additional 3659 children from the ALSPAC cohort (p = 1.53 x 10(-6)). The minor allele of the rs314277 variant has previously been linked to increased height and delayed age at menarche, but in our study it was associated with increased 2D:4D in the direction opposite to that of previous reports on the correlation between 2D:4D and age at menarche. Our findings call into question the validity of 2D:4D as a simplistic retrospective biomarker for prenatal testosterone exposure. 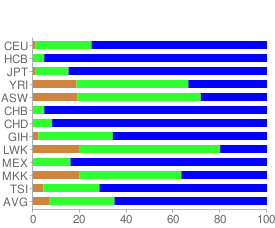 A chart from SNPedia illustrates population differences at rs314277. Asians (CHB, CHD, JPT) show very low frequencies of the minor allele; blacks (YRI, ASW, LWK, MKK) show relatively high frequencies; and Europeans (CEU, TSI) are intermediate. This is actually the reverse of the pattern we might have expected, but many other genetic variants undoubtedly influence traits such as digit ratio and age at menarche and the fundamental issue remains.
Posted by n/a at 4/19/2010 07:14:00 PM

I'm glad to hear that. I have the digit ratio of a girl or a homo.

Proc Biol Sci. 2004 Aug 7;271 Suppl 5:S296-8.
How well does second-to-fourth-digit ratio in hands correlate with other indications of masculinity in males?

Low second-to-fourth-digit (2D:4D) ratios in hands have previously been used as a proxy for prenatal testosterone levels. Moreover, it has recently been suggested that prenatal testosterone levels may direct future masculinization. If true, 2D:4D ratios should negatively correlate with traits in males that are developed and maintained by testosterone at puberty such as facial and body masculinity and testes volume. We failed to find significant correlations between 2D:4D ratios and these traits.