The male would have been two meters tall when living (see color plates I and IIa); the corpse was lying on its right side with legs bent and propped up by a small piece of wood (perhaps to promote preservation by means of circulation of air around the corpse). The hair, eyelashes, beard and chest hair were intact and traces of makeup (ocher spiral sun-symbols) could be seen on the face. The presence in the tomb of two small bone spoons with dried ocher pigment in them may indicate that the makeup was applied after death. The male's head hair was yellowish brown half gone to white; 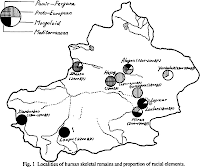 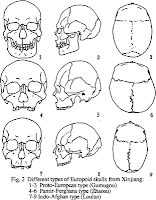 Between 1920 and 1940, only three foreign scientists published completed research in this area. They are: Arthur Keith of England (1929), Carl-Herman Hjortsjo and Ander Walander of Germany (1924) and A.N. Iuzefovich of the USSR (1949). A total of twenty skulls were described. Five came from the northern part of the Taklamakan Desert and Keith thought they characterized the "Loulan racial type." Eleven skulls were collected by Sven Hedin from near Luobubo (Lopnor) in 1928 and 1934, and have been subdivided into three groups (Nordic, Chinese, and Alpine) by Hjortsjo and Walander. The remaining skulls also came from the Luobubo (Lopnor) area and exhibit Mongoloid characteristics. Iuzefovich considered these to be of Tujue (Turkish) origin (Keith, A., 1929; Hjortsjo, C.H. and A. Walander, 1942; Iusefovich, A.N., 1949). [. . .]

Chinese scientists have conducted systematic excavations in this region since 1940. I have studied all the skeletal material housed at the Institute of Archeology of Xinjiang and analyzed the physical and racial characteristics of these human bones. The materials included about 274 skulls which were collected from nine ancient cemeteries in Xinjiang. The cemeteries range in age from about 1800 B.C.E. to 300 C.E.

The distribution of these cemeteries (Fig. I), their precise age, and the racial morphological characteristics of the skeletal material will be described as follows:

(1) The Gumugou cemetery of the lower reaches of the Kongque River [. . .]

To sum up, these skulls have definite Western racial characteristics. The homogeneity between individuals also is clear. In consideration of the synthetic character mentioned above, they seem to show some primitive features which have collectively been called "Proto-European type" by some anthropologists of the former USSR in the past Racially, they are close to the populations of the Bronze Age of southern Siberia, Kazakhstan, Central Asia, and even the grassland areas of the lower reaches of the Volga River- (Han Kangxin, 1 986b).

Most of the skulls are possessed of Western racial characteristics, but also show some variation. For example, one subset of them resembles the East Mediterranean type with long and high cranial vaults (Indo-Afghan), other crania are somewhat broader or round headed and similar to that of the Pamir-Ferghana, the remainder of the crania combine features of both of these groups. Nasal apertures are typically high and narrow as are the orbits, but facial projection in the transverse plane is identical with that of the Pamir-Ferghana group. This may indicate that there was some mixture between the two different European races (Han Kangxin, 1993). [. . .]

Twenty-one of them are of clear East Mongoloid character, eight can be classified as belonging to the Western race. The general morphological character of the skulls classified as Mongoloid are elongated with fairly wide orbits and close to that of the East Tibetan populations. The skulls with Western racial character are close to that of the Gumugou cemetery of the lower reaches of the Kongque River in their morphology (Han Kangxin, 1990). [. . .]

Based on the analysis of the materials of seven cemeteries mentioned above, it can be indicated that the source of racial morphological characteristics of the ancient population in Xinjiang is not unitary (Fig. 2). For example, there are at least three branches of the Caucasoid race and not merely one type from the Mongoloid race. Consequently , their emergence and distribution in Xinj iang as well as origin of typology cannot be completely the same. The racial composition of the modern population of Xinjiang is closely related to this biological background of complex racial origins (Han Kangxin, 1985, 199 1). [. . .[

At least by the early Bronze Age of this area, Western racial elements with primitive morphological characteristics had entered into the Luobubo (Lopnor) area. Their physical character is close to that of the ancient populations of Central Asia (including Kazakhstan), southern Siberia, and the Volga River drainage basin with the boundaries of the former USSR. As far as their racial origins are concerned, they have a direct relationship with the ancestors of the analogous Cro Magnon (Homo sapiens) type of late Paleolithic east Europe. Such type of late Homo sapiem was also found in the Voronezh region of the Don River drainage. The morphological character of these skulls is apparently similar to that of those skulls from the Gumugou cemetery of the Kongque River, but more primitive than the latter. 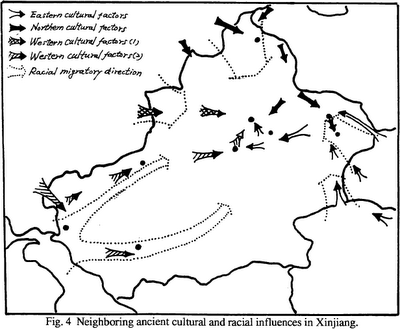 The top skull looks like what Coon called Brunn.

Interesting post! The Penn Museum in Philadelphia is featuring mummies from western China in their "Secrets of the Silk Road" exhibition come February. Check it out - http://www.penn.museum/silkroad/