General intelligence has been found to correlate with hair and eye color, among other physical characteristics:


Among these physical correlates of IQ are certain blood group and particularly the positive correlation of g with the number of homozygous genetic loci (i.e., the same alleles at each locus on both chromosomes) for various blood types, which indicates greater-than-usual genetic similarity of the individual's parents. This would ensure less immunological risk of antigenic incompatibility between mother and fetus, a prenatal factor that can have subtle deleterious effects on brain development in utero. The best-known antigenic incompatibility between mother and fetus with potentially harmful effects on fetal development is that for the Rh factor, which occurs in second-born (and later-born) children when the mother is Rh-negative and the fetus is Rh-positive (having received the RH+ allele from the father). Dizygotic (DZ) twins who are discordant for the RH factor (and certain other blood antigens as well) show greater IQ differences than DZ twins who are concordant. Another blood variable of interest is the amount of uric acid in the blood (serum urate level). Many studies have shown it to have only a slight positive correlation with IQ. But it is considerably more correlated with measures of ambition and achievement. Uric acid, which has a chemical structure similar to caffeine, seems to act as a brain stimulant, and its stimulating effect over the course of the individual's life span results in more notable achievements than are seen in persons of comparable IQ, social and cultural background, and general life-style, but who have a lower serum urate level. High school students with elevated serum urate levels, for example, obtain higher grades than their IQ-matched peers with an average or below-average serum urate level, and, amusingly, one study found a positive correlation between university professors' serum urate levels and their publication rates. The undesirable aspect of high serum urate levels is that it predisposes to gout. In fact, that is how the association was originally discovered. The English scientist Havelock Ellis, in studying the lives and accomplishments of the most famous Britishers, discovered that they had a much higher incidence of gout than occurs in the general populations.

Asthma and other allergies have a much-higher-than-average frequency in children wiht higher IQs (over 130), particularly those who are mathematically gifted, and this is an intrinsic relationship. [. . .]

Then there are also a number of odd and less-well-established physical correlates of IQ that have each shown up in only one or two studies, such as vital capacity (i.e., the amount of air that can be expelled from the lungs), handgrip strength, symmetrical facial features, light hair color, light eye color, above-average basic metabolic rate (all these are positively correlated with IQ), and being unable to taste the synthetic chemical phenylthiocarbamide (nontasters are higher both in g and in spatial ability than tasters; the two types do not differ in tests of clerical speed and accuracy). The correlations are small and it is not yet known whether any of them are within-family correlations. Therefore, no causal connection with g has been established.

Finally, there is substantial evidence of a positive relation between g and general health or physical well-being. In a very large national sample of high school students (about 10,000 of each sex) there was a correlation of +.381 between a forty-three-item health questionnaire and the composite score on a large number of diverse mental tests, which is virtually a measure of g. By comparison, the correlation between the health index and the students' socioeconomic status (SES) was only +.222. Partialing out g leaves a very small correlation between SES and healthy status.

I don't know if the relationship between IQ and light hair/eyes holds within ethnically homogeneous samples. Taking Europe as a whole, I would find the reported correlation unsurprising. Internationally, lighter skin correlates with greater intelligence:


We correlated mean IQ of 129 countries with per capita income, skin color, and winter and summer temperatures, conceptualizing skin color as a multigenerational reflection of climate. The highest correlations were − 0.92 (rho = − 0.91) for skin color, − 0.76 (rho = − 0.76) for mean high winter temperature, − 0.66 (rho = − 0.68) for mean low winter temperature, and 0.63 (rho = 0.74) for real gross domestic product per capita. The correlations with population of country controlled for are almost identical. Our findings provide strong support for the observation of Lynn and of Rushton that persons in colder climates tend to have higher IQs. These findings could also be viewed as congruent with, although not providing unequivocal evidence for, the contention that higher intelligence evolves in colder climates.

Higher cognitive ability was found to be associated with sharper, more linear facial features in an ethnically British and Irish sample. 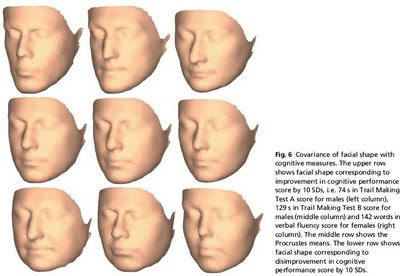