A bust, "believed to be the oldest representation of [Julius Caesar]", was recently reported from France. David Meadows at rogueclassicism thinks it looks like George Bush. I don't think the resemblance is that close. 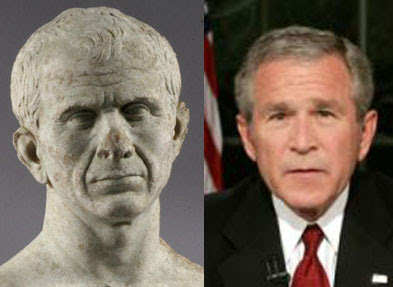 But I do agree with Carleton Coon that the "facial type [of the early Roman rulers] is not native to the Mediterranean basin, but is more at home in the north." According to Coon, the Roman patricians were predominantly "Keltic" Nordic:

movements from the north introduced Nordics of two varieties; the classic Hallstatt type, and the Keltic Iron Age type which was later to form the basic racial element among the Roman patricians.

The "Keltic Nordic" look, in turn, is largely synonymous today with northwestern Europe.

To an American, Englishman, or Belgian, the Keltic Nordic phenotype represents a "normal" or "average" appearance. Likewise, in the minds of those who are neither American, English, nor Belgian, nor belonging to any other predominantly Keltic population, the Keltic look will usually stand synonymous with the descriptive tags "American" or "English". This is the most numerous of the two Nordic types - a type which gains in variability with the constant infusion of non-Nordic blood, particularly in North America and Australia. Thanks to one of the most popular phenomena of the 20th Century, the Silver Screen, the Keltic Nordic is quite possibly the most recognized and familiar of all Nordish phenotypes throughout the world. [Above description from an older version of SNPA's race gallery.]

In a journal about the West and its future, it is fitting to end this article by briefly recounting the fate of the Roman upper class. Among Indo-European peoples, the Romans offer an especially useful example because they left masses of records, enabling later historians to determine what became of them. The evidence found in ancient texts implies that this class descended largely from Indo-Europeans who had a decidedly northern European physical type, although that isn't something one reads in modern books about Roman history. In Rome, though, the upper class was always a tiny minority. Instead of protecting its interests, it allowed itself to wither away. Consider a bleak statistic. We know of about fifty patrician clans in the fifth century B.C., but by the time of Caesar, in the later first century B.C., only fourteen of these had survived. The decay continued in imperial times. We know of the families of nearly four hundred Roman senators in A.D. sixty-five, but, just one generation later, all trace of half of these families had vanished.

If we in the West want to avoid a similar fate, we must learn from Indo-European history.

Someone Gallic is playing political games. This fake bust is of George W Bush and not the Roman Emperor that ended democracy and invaded Gaul.

"I agree with Coon that the first roman rulers had not mediterranean faces"
Pure speculation.
First,any of the indoeuropean people settled in Italy in that time differed so much from each others..and as far as i know,celts in Italy settled in almost all the north-central east regions of Italy.Umbrians spoke a similar language to latins,so was for samnites.
So they were not so differents from other italic tribes.
2nd,Italians barely have mediterranean features in central-north Italy,where alpinid and dinarics types are more presents.

No sense. The Romans had Mediterranean appearance and they are still having.
Wake up folks.
One is Anglo-Saxon and Julius Caesar was Italian.
And of course that we can find someone which "look like" Julius Caeser in all countries over Europe.
But the most important, is this is the fake bust of Julius Caesar!
The fake one!
Not the true one!
And Julius Caesar look like a Roman no an Anglo Saxon!

Actually we don't really know if Julius Caesar, including all of the Roman people, is indeed Dinarid or Italian.

"The evidence found in ancient texts implies that this class descended largely from Indo-Europeans who had a decidedly northern European physical type, although that isn't something one reads in modern books about Roman history"

Typical idiocies from North Euros who are so ashamed of their past where they were swinging from threes like apes, that need to steal to Italians their great history. You are no different from Afrocentrists...lol . So what if some Roman was Nordic Looking?? Still today you find Nordic looking Italians in abundance. What's next that Sheakspeare was Italians because he was dark haired then?? LOL
Colin Farrell and Sean Connery are too?? Then again even Italians descend from indo european tribes you dimwits, that's a linguistic matter.
Please accept that you North Euros were like Africans back in time and deal with it.