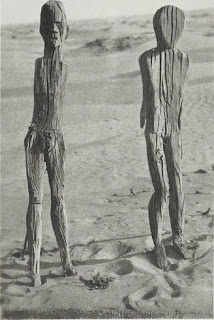 
All the men who were analyzed had a Y chromosome that is now mostly found in Eastern Europe, Central Asia and Siberia, but rarely in China. The mitochondrial DNA, which passes down the female line, consisted of a lineage from Siberia and two that are common in Europe. Since both the Y chromosome and the mitochondrial DNA lineages are ancient, Dr. Zhou and his team conclude the European and Siberian populations probably intermarried before entering the Tarim Basin some 4,000 years ago.

The Small River Cemetery was rediscovered in 1934 by the Swedish archaeologist Folke Bergman and then forgotten for 66 years until relocated through GPS navigation by a Chinese expedition. Archaeologists began excavating it from 2003 to 2005. Their reports have been translated and summarized by Victor H. Mair, a professor of Chinese at the University of Pennsylvania and an expert in the prehistory of the Tarim Basin. [. . .]

Several items in the Small River Cemetery burials resemble artifacts or customs familiar in Europe, Dr. Mair noted. Boat burials were common among the Vikings. String skirts and phallic symbols have been found in Bronze Age burials of Northern Europe.

Folke Bergman's 1939 report, Archaeological Researches in Sinkiang, is available online at the Digital Archive of Toyo Bunko Rare Books, along with expedition records from Sven Hedin, Aurel Stein, and others. Ördek was Sven Hedin's Turkish servant, who after being inspired by what he saw working for Hedin discovered the cemetery on a tomb robbing expedition in search of buried treasure. From Bergman:


STEIN emphasizes the non-Mongolian features of the Lop-nor mummies, and I have been able, on the whole, to confirm his statement. One or two of the mummified heads at Cemetery 5 had, however, broad cheek-bones giving them a "Mongolian" look, but this might be due to the individual variations that occur in every race or type 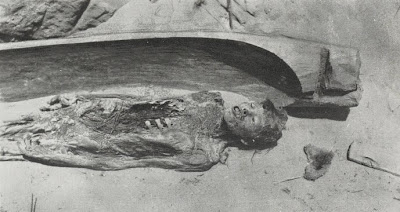