Exploring the Bases of Partisanship in the American Electorate: Social Identity vs. Ideology. Political Research Quarterly June 2006 vol. 59 no. 2 175-187. 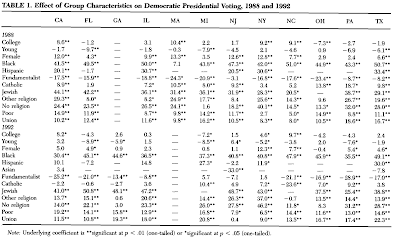 [. . .] The estimates indicate that elements of the New Deal Democratic coalition remain intact across the largest states in recent presidential elections. For example, controlling for other factors, the voting poor in each state remain more inclined to support the Democratic standard bearer. [. . .]

The marginal Jewish effect approaches, and occasionally surpasses, that for race across the states. Relative to mainline Protestants, Jews remain much more Democratic in their presidential voting (see also Manza and Brooks, 1997b). This marginal effect is powerful across the states in both 1988 and 1992, showing that Jewish identification manifests itself in terms of distinctive political behavior both in states with sizable Jewish populations (e.g., New York) and in states with much smaller Jewish populations (e.g., Illinois).

The effect of Catholic identification on Democratic voting was uniformly positive in 1988, but much less potent than the influence of being Jewish. A noteworthy Catholic effect was evident in states as dissimilar as Massachusetts and Texas. Relative to the support for Dukakis in 1988, the Catholic support for Clinton in 1992 was much spottier." Only results for the voters of Michigan, Ohio, and Pennsylvania revealed a powerful, positive Catholic influence across both 1988 and 1992. With the possible exception of these three states, it appears that Democratic presidential candidates can no longer depend on a reservoir of support among large-state Catholics (see also Petrocik, 1987; Green and Guth, 1991; Kellstedt and Green, 1993). Some accounts suggested that the strong appeal of Reagan shook many Catholics loose from their Democratic moorings. But the results from 1992 suggest that this shift is more than a Reagan phenomenon. 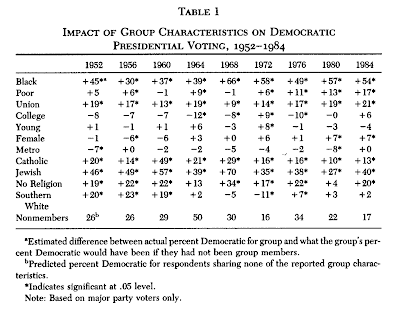 Except for bivariate analyses, previous research on the group basis of partisan strength in the United States has focused on party identification as the dependent variable. This essay examines the group basis of the presidential vote, 1952–1984, using a multivariate logit approach. Our multivariate analysis shows the persistence of group-based divisions between Republican and Democratic voters. Among other patterns, class-based divisions have noticeably increased.

[. . .] Over the full 32-year span of this study, the major group effects are race, religion, and class. This of course is not surprise. However, it may be a surprise to see the effect of being Jewish (vs. Protestant) is almost as great as the effect of being black (vs. nonblack), and that membership in the "no religion" category generally makes one more Democratic than does being Catholic. It may also be a surprise to see the more important "class" measure to be union membership rather than poverty.

[. . .] The bottom row of table 1 traces the voting behavior of non-group members, 1952-184. These nonmembers are northern white male Protestants who are not college educated but not poor, over thirty and living outside the largest SMSAs. These "vanilla" voters show a steady Republicanism that sometimes reaches margins of more than four to one. 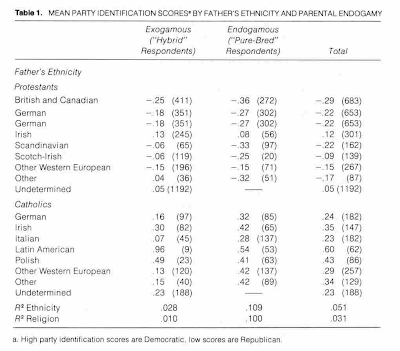 We had suggested that ethnicity's impact should be greatest in the Northeast and negligible in the South. Indeed, the explained variance estimates (R2s) of the ethnic (or religious) effect reported in Table 2 seem to bear out those hypotheses. [. . .] On the other hand, inspection of the unstandardized coefficients for those equations---a more appropriate way of comparing impact across populations with different distributions of dependent and independent variables---reveals only negligible differences between the Northeast and the other nonsouthern regions. In the Midwest and West the difference is virtually identical (Catholics are about one half a standard deviation unit more Democratic than Protestants) while in the North it is only slightly larger (about seven-tenths of a standard deviation unit). In the South, as expected, there is virtually no difference in the political identification scores of Catholics and Protestants.