"As you can see, the lines for Care and Fairness (the two top lines) are moderately high across the board. Everyone—left, right, and center—says that concerns about compassion, cruelty, fairness, and injustice are relevant to their judgments about right and wrong. Yet still, the lines slope downward. Liberals say that these issues are a bit more relevant to morality than do conservatives.

But when we look at the Loyalty, Authority, and Sanctity foundations, the story is quite different. Liberals largely reject these considerations. They show such a large gap between these foundations versus the Care and Fairness foundations that we might say, as shorthand, that liberals have a two-foundation morality.4 As we move to the right, however, the lines slope upward. By the time we reach people who are “very conservative,” all five lines have converged. We can say, as shorthand, that conservatives have a five-foundation morality. [. . .] 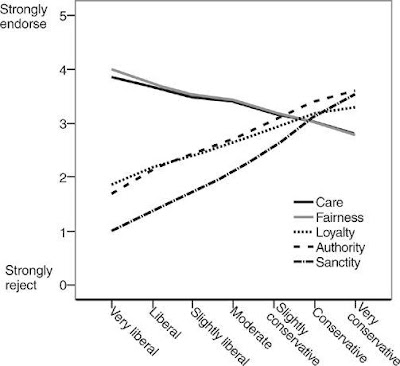 Figure 8.2 shows our data on the MFQ as it stood in 2011, with more than 130,000 subjects. We’ve made many improvements since Jesse’s first simple survey, but we always find the same basic pattern that he found in 2006. The lines for Care and Fairness slant downward; the lines for Loyalty, Authority, and Sanctity slant upward. Liberals value Care and Fairness far more than the other three foundations; conservatives endorse all five foundations more or less equally.8 [. . .] We’ve found this basic difference no matter how we ask the questions."

Particular rules and virtues vary across cultures, so you’ll get fooled if you look for universality in the finished books. You won’t find a single paragraph that exists in identical form in every human culture. But if you look for links between evolutionary theory and anthropological observations, you can take some educated guesses about what was in the universal first draft of human nature. I tried to make (and justify) five such guesses:

• The Care/harm foundation evolved in response to the adaptive challenge of caring for vulnerable children. It makes us sensitive to signs of suffering and need; it makes us despise cruelty and want to care for those who are suffering.

• The Fairness/cheating foundation evolved in response to the adaptive challenge of reaping the rewards of cooperation without getting exploited. It makes us sensitive to indications that another person is likely to be a good (or bad) partner for collaboration and reciprocal altruism. It makes us want to shun or punish cheaters.

• The Loyalty/betrayal foundation evolved in response to the adaptive challenge of forming and maintaining coalitions. It makes us sensitive to signs that another person is (or is not) a team player. It makes us trust and reward such people, and it makes us want to hurt, ostracize, or even kill those who betray us or our group.

• The Authority/subversion foundation evolved in response to the adaptive challenge of forging relationships that will benefit us within social hierarchies. It makes us sensitive to signs of rank or status, and to signs that other people are (or are not) behaving properly, given their position.

• The Sanctity/degradation foundation evolved initially in response to the adaptive challenge of the omnivore’s dilemma, and then to the broader challenge of living in a world of pathogens and parasites. It includes the behavioral immune system, which can make us wary of a diverse array of symbolic objects and threats. It makes it possible for people to invest objects with irrational and extreme values—both positive and negative—which are important for binding groups together.

Interesting to me that the Loyalty and Authority "foundations" are highly correlated.

I think this is because both are kinds of group loyalty, general loyalty and loyalty to the authorities backed by the group.