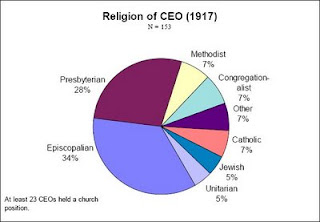 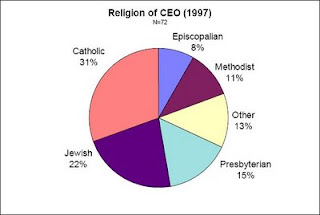 Source: The American CEO in the Twentieth Century: Demography and Career Path

For comparison, according to a 2001 survey [1]:
1.3% of Americans identify as (religiously) Jewish (although it's typically claimed ethnic Jews account for something like 2.2% of the U.S. population);
24.5% identify as Catholics;
1.7% identify as Episcopalian;
2.7% identify as Presbyterian; and
6.8% identify as Methodist

Note that Jews are overrepresented in the 1997 sample by a factor of 10. Catholics are overrepresented to a lesser degree. While some mainline Protestant denominations maintain above average representation, Protestants as a whole are underrepresented; keep in mind that in no sense do, e.g., Episcopalians form an endogamous caste, whereas Jews obviously do.

Assuming all Protestants, represented by the graph are N.European and all Catholics are S&E.Europeans, then the NE proportion dropped from ~88% to ~47%. Is there any evidence of a benefit (financial?) that accrued to the NEs? In other words, even though their number was much reduced over all, are the remaining NE CEOs wealthier, on a per capita basis or in comparison to the average Joe?

Is there any evidence of a benefit (financial?) that accrued to the NEs?

None that I could imagine.

In modern times we see right before our eyes Northern Europeans surrendering power to Southern and Eastern Europeans... when it's been roughly a century -- a mere century -- since this country saw an influx of these newer immigrants.

We are supposed to believe, if I am not mistaken, that a subrace that helped elect a mulatto president* (White support for Obama was 43%) in the most powerful nation in the world kept a caste in place for many centuries in Greece and Rome, ruling over much more closely related Mediterraneans...

I'm of the opinion -- since the topic of nationality and economic/social power has been brought up -- that the aristocrats of Greece and Rome were a mix of Mediterranean and Nordic. The tendency of Nordics to blend is just too strong for the aristocrats to have been able to maintain their purity for too long, assuming they started out Nordic in the first place (Keltic Nordics are supposedly a blend anyway).

I've come to the conclusion that your historical viewpoint is to a large degree sensible and it should be open to discussion. I think the main thing that pisses people off is your condescending tone toward non-NEs. The historical claims made by you on your pages hosted by Kemp (or whoever it is) are innocuous in and of themselves. And I have found, in taking a little bit of time to read your pages, that you cede some ground on possible mixture in the ancient ruling castes. This seems to support my case that, unwittingly, you and Kemp are promoting mixing between SEs and NEs.

As for me, I think blends of SEs and NEs tend to be more attractive than NEs (whose features tend to be somewhat rugged).

I also suspect, and admittedly I don't have any proof with me other than the success of ancient Greece and Rome, that there is a hybrid vigor effect when Nords and Meds mix.

*This is not unprecedented. The Prime Minister of Sweden, John Fredrik Reinfeldt, is 1/16 Black.

Is there any evidence of a benefit (financial?) that accrued to the NEs?

I reflected on this question, and I tried to look at it from an angle of ethnic self-interest. Are there any benefits to NEs that we see a greater proportion of CEOs who are Jewish, SE, and EE, than their population numbers would indicate?

First, I see no evidence that the ascent of SEs and EEs has been harmful to NEs. Going by what n/a has said, NEs seem to prefer living amongst their own kind. They tend to avoid urban areas and noisy, bustling cities. Yet, highly energetic, fast-paced cities are exactly where corporations like to be. So it makes sense that Greek Americans, Italian Americans and Jewish Americans are going to disproportionately fill the executive levels. If you are IBM, are you going to set up your headquarters in New York or Des Moines, Iowa? It is likely that you will attract more talent in New York -- and I suspect NEs who live in certain parts of New York (excluding the slums) will have higher IQs than those in Des Moines, but this is conjecture.

Second, it is highly unlikely that there is widespread discrimination against NEs in corporate America which benefits SEs and EEs. And if there is, given that this country was founded by NEs, it would make a mockery of the notion of any inherent mental superiority of NEs, beyond a possible slight advantage in g (although I suspect Italian-American guidos with southern-tip ancestry can hold their own against NEs born and raised in Louiseville, Kentucky on standardized tests).

Third, since NEs naturally avoid major urban areas in the U.S. in great numbers, without SEs and EEs these parts would be much browner than they currently are: more major cities would be akin to Detroit. Thus, while some NEs may dislike their swarthy SE counterparts, SEs serve to "Whiten" (somewhat) some of the major American cities.

Does this benefit NEs overall? Probably not -- though some NE investors of Chrysler would have been pleased with Iaccoca's performance. Does it harm them overall? In my view, not in any obvious, direct way.

These cities could have been predominantly NE, except that NEs imported Blacks by the millions as slaves and later emancipated them (leaving cities like Atlanta and New Orleans majority Black). Thus crime rose. They also decided to exploit brown Latin Americans for profits -- yes, individual NEs benefit when illegal immigrants do work for a fraction of the cost. And in a world of finite resources, there are only so many positions to fill, so that a NE with an average IQ could lose out to an Italian American with a high IQ.

I think the argument that SEs and EEs are damaging to the fabric of the U.S. loses weight given their preponderance in major urban areas -- areas NEs have fled, for reasons of temperament, among other factors. And to dwell on the negative traits of SEs in the city while ignoring the greed of NE businessmen who support mass immigration is hypocrisy at its best -- and one could argue there is a genetic component to this behavior, intrinsic to the NE.

On one level, that's understandable: you're just trying to smooth your ruffled feathers. But at the same time, you do yourself a disservice because your inanities only fortify the case against you.

For God's sake, snap out of it. If you've made it here, you must have at least an inkling of the precipice at which our world stands. Good. Not even the most ardent Anglo-Saxonist can deny you that. But to squander that understanding with a juvenile stance of either being permitted to lay claim to one and the same greatness as nordics or wanting no part of racialism is madness.

Refitting your view of yourself to take account of racial realities can take many forms, but they all begin with acceptance. I urge you to try it -- it's really quite liberating.

They are not so much arguments as they are observations.

But to squander that understanding with a juvenile stance of either being permitted to lay claim to one and the same greatness as nordics or wanting no part of racialism is madness.

I don't think you really understand me or my motives. That's a good try though.

I am a barbarian, and I really don't want to lay claim to any civilization or to even modern culture. I am quite happy to be a barbarian.

And I don't want any part of racialism.

What I'm trying to do is go beyond the concepts and categories we create to define ourselves, as well as which keep us from communicating with each other.

Yes, it's a form of madness.

Anyway, I have productive things to do, like chasing girls and working out. Those types of things increase reproductive fitness, whereas posting in Internet forums is more internally validating and self-amusing.

So I'll be out for a while.

I wonder how much different these numbers would look if wall street ceo's were excluded. The percentage of jews in other sectors of the economy is probably much smaller.

I assume that were this survey acrried out today there would be significant inroads by Chinese and Indian Americans. The Indians would be mainly Hindus but I imagine the Chinese could be all sorts or religions (Daoist, Buddhist, folk religionist, Christian etc)