Not exactly news, but we do finally get to see European, Jewish, and Middle Eastern samples on the same plot. 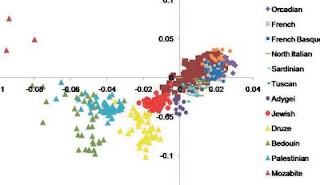 This plot seems consistent with the idea of Ashkenazi as Middle Easterners with moderate Southern European (and/or minimal Northern European) admixture.


These analyses make clear that individuals with full Jewish ancestry are a genetically distinct group from those having no (self reported) Jewish ancestry. Of the subjects that self-identified as Jewish and knew their type, almost all were Ashkenazim.

This leaves open the question, however, of why Americans of Jewish ancestry are a distinct group. There are two extreme possibilities: Either the Jewish group reflects ancestry from source populations other than those of non-Jewish Americans, or Jewish populations have undergone bottlenecks that change their genetic makeup.

These possibilities can be distinguished to a degree by comparing the position of the full Ashkenazi Jewish cluster to a series of geographically distributed populations represented by the human genome diversity panel [9]. We found that the full Jewish cluster fell between that of Middle Eastern and European populations. We also compared the average heterozygosity across the set of LD-pruned polymorphisms in those with full Jewish ancestry to those without, and found that the subjects with four Jewish grandparents were, on average, slightly more heterozygous than the subjects with no Jewish ancestry. These data therefore suggest that the Jewish group is distinguished from non-Jewish Europeans more because of their genetic heritage in the Near East than due to population bottlenecks perturbing the genetic composition of Jewish groups.