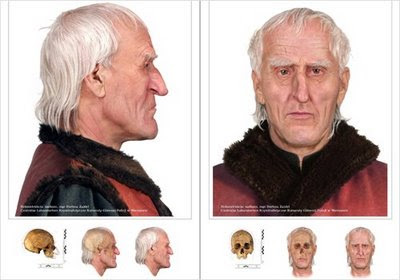 The identity of the skull was supposedly confirmed through DNA testing.


WARSAW, Poland – Researchers said Thursday they have identified the remains of Nicolaus Copernicus by comparing DNA from a skeleton and hair retrieved from one of the 16th-century astronomer's books. The findings could put an end to centuries of speculation about the exact resting spot of Copernicus, a priest and astronomer whose theories identified the Sun, not the Earth, as the center of the universe.

The reconstruction shows a broken nose and other features that resemble a self-portrait of Copernicus, and the skull bears a cut mark above the left eye that corresponds with a scar shown in the painting.

Swedish genetics expert Marie Allen analyzed DNA from a vertebrae, a tooth and femur bone and matched and compared it to that taken from two hairs retrieved from a book that the 16th-century Polish astronomer owned, which is kept at a library of Sweden's Uppsala University where Allen works.

If anyone has more details on the DNA analysis, please post them.