In screening for subjects for a reeducation experiment, Gregory Razran collected data on the "ethnic attitudes" of 150 Americans (about 100 college students from Columbia and Barnard and 50 middle-aged New Yorkers) in the 1930s, using 'a special "ethnic surnames plus nonethnic photographs" rating method' along with interviews of some subjects. Razran finds [1]:

The evidence for the existence of very definite unfavorable stereotypes and dislikes of Jews and Italians, and to a small extent also of Irish, is unmistakable. Photographs to which Jewish surnames had been attached dropped, as seen from Table 3, 1.21 points in General Liking, 0.81 in Character, 0.29 in Beauty, while going up 1.01 in Ambition and 0.36 in Intelligence, with little consistent change in Entertainingness. The photographs with Italian surnames went down 0.78 points in General Liking, 0.33 in Beauty, 0.35 in Intelligence, 0.45 in Character, 0.34 in Entertainingness, while going up 0.39 points in Ambition. The Irish surnames produced a drop of 0.25 points in General Liking, 0.12 points in Beauty, 0.19 in Intelligence, 0.29 in Character, o.i i points in Entertainingness and a rise of 0.18 points in Ambition. The drops in General Liking and Character for Jews and Italians and the rise in Ambition for Jews are fully reliable statistically, while the other drops and rises possess some degree of reliability, are consistent, and borne out, in the main, by the interviews. The results are even more striking if one considers the fact that nearly 30 per cent of the subjects showed no consistent changes in their ratings and were—as revealed by some post-ratings questionings — definitely free from ethnic dislike.

In contrast, "changes in the ratings of the photographs with Old American surnames" were "few and in no case statistically reliable".

Contrary to what one might expect based on the rantings of various German-identified types, the Anglo-Saxons in this sample are not overly philo-Semitic--just the opposite:

The dislikes and unfavorable stereotypings of Italians follow approximately the same order, except that here the differences do not become statistically reliable till we pit those of Anglo-Saxon, German, Scandinavian, Irish, and Dutch descents against those who descend from white ethnic groupings in Eastern and Southern Europe (including the Jews among the latter).

Regional differences seem minimal, but in this sample, at least, Mid-Atlantic and New England residents like Jews the least and Southerners like Jews the most. 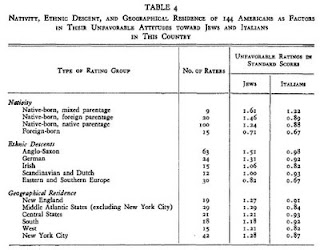 Also of interest, dislike of Jews peaks among the middle-class and middle-income, while dislike of Italians continues to rise with income (on the whole, all occupation/income groups dislike both Jews and Italians; only the degree varies):

From Table 5 we learn that college students are less prejudiced against Jews when their parents' incomes are either less than $3,000 or more than $12,000 than when these incomes are in intermediate brackets; that the parents' college education lessens a little the prejudices of their children; and that children of professionals, laborers, and big businessmen have less Jewish prejudice than children of farmers, white-collar workers, and small businessmen. The differences in amount of Jewish prejudice between the children of professionals and white-collar workers are fully reliable statistically, while the other differences are fairly or somewhat reliable. On the other hand, this table shows that prejudice against Italians is smaller among children of white-collar workers and small businessmen than among children of laborers and big businessmen; and that this prejudice is little affected by the education of the parents of the students, and is the greater the higher the income of the parents.

prejudice against Jews is greater among Republicans than among Democrats, among opponents than among proponents of the New Deal (in 1938), among men students than among women students, among students who are members of sororities or fraternities than among those who are not members of these organizations, and among those who spent part of their lives in rural communities. Prejudice against Italians is, on the other hand, unrelated to political party preferences, attitudes toward the New Deal, and residence in rural communities. [. . .] Both prejudices are less among Catholics than among Protestants—very much less in the prejudice against Italians—but in this study religious affiliations have been so much overshadowed by ethnic descent that not much significance should be attached to this finding.

For one thing, in some areas that are no doubt determinants of ethnic—or any other social—status, the Jews have been judged favorably, or only slightly or moderately unfavorably. Take, for instance, intelligence and education—or rather a lack of them. The adjectives "ignorant," "stupid," "uncivilized," "primitive," "nai've," and the like have been applied very lavishly to the Italians in this study, and to some small extent also to the Irish. But in the case of the Jews the stereotyping was, as seen from the tables, in a favorable direction, with only occasional unfavorable Comments in the interviews such as "Jewish intelligence lacks originality," is "destructive," or is "too verbal and academic," and the like. In another area, that of "hygiene" and "grooming" and the adjectives of "dirty," "smelly," "sloppy," the stereotype of Jews was only a little more unfavorable than that of the Irish and clearly less unfavorable than that of the Italians.

In two other social realms that unquestionably are determining factors in ethnic status and distance, the Jews were judged moderately unfavorably. These realms are, first, what may be called "manners," "etiquette," and "taste," and, secondly, emotional stability. Neither of these realms has come in for direct rating, but both of them have been important in setting the rating of General Liking—to a considerable extent also Character and Entertainingness— and both have figured heavily in the interviews. In the first realm, the characterizations of "loud," "gaudy," "vulgar," "ostentatious," "uncouth," "don't know how to behave," often dubbed both Jews and Italians. There was, however, this difference that the ill-manners of the Italians were attributed to ignorance and to what may be called a "culture lag"—using culture in its popular rather than its sociological connotation—while Jewish bad manners were said to stem from more basic character defects which, as will be seen later, are the crux and "focal organizer" of nearly all the prejudice toward Jews. The unfavorable stereotyping with regard to emotional stability was "neuroticism" for the Jews, "irresponsibility," "hot air," and "alcoholism," for the Irish, and "hot tempered," "impulsive," "revengeful," and "primitive emotionality," for the Italians. Again, there was a tendency to consider the alleged instability of the Jews as socially more offensive, even though it was admitted that in concrete social situations the alleged instability of the other two groups would be more likely to be harmful and disruptive.

Except for General Liking, Jews scored lowest in Character and highest in Ambition. However, while Ambition is quite a specific aspect of behavior to be rated, Character is of course very composite, and we must turn to the interviews for specifications. On the whole, the chief determinants of the very low Jewish scores in Character was the stereotype of their unethical conduct—"unscrupulous," "dishonest," "crooked," "unfair," "scheming," "egotistic," "egocentric,"—with the stereotypes of "aggression," "cowardice," and "ill-manners" following in order.

Another distinguishing characteristic, this time a favorable one, of attitudes toward Jews is the considerable number of individuals whose attitudes and stereotyping clearly class them as pro-Jewish. (Excluding self-ratings no comparable pro-Italian and pro-Irish groups, to speak of, were found.) There were 29 such individuals—15 per cent— in this study, and 12 of them were interviewed. In three of the 12, the pro- Jewishness was primarily a matter of ethics, Christian ethics, a desire to help the downtrodden, to atone for the "sins of the fathers," and in at least one of the three, these feelings were tied up with an unhappy frustrated personal life. The pro-Jewishness of the remaining nine was, however, little governed by such considerations, but seemed to stem directly from a conviction that the Jews are a superior group in most, if not in all, personal and social qualities. Among the students, this alleged superiority revolved around Jewish contributions to civilization, their preeminent and forward ideas and ideals, almost a belief that most positive qualities of Western culture are largely due to Jews. In some ways, the views of these non-Jewish Americans correspond to the doctrine of a "Jewish mission:" "peace and love," as preached by some American rabbis; "revolution and a new social order," as put forth by some early Russian-Jewish revolutionaries. On the other hand, the pro-Jewish subjects of the middle-aged group saw Jewish superiority primarily in the personal success, achievements, and habits of the latter. Said a small storekeeper of Irish descent: "I take my hat off to the Jews. They know how to do things and get things, despite handicaps I certainly would be happy if my daughter married a Jew. Jews are good family people, good providers, loyal to their wife and children, and don't drink."

The general curve of the distribution of dislike-like of Jews also seems to differ from the curves of dislike-like of the two other ethnic groups, as may be gathered from Table 8. The curves for both Italians and Irish are essentially unimodal, the first being bell-shaped and the second being positively skewed, but the curve for the Jews unmistakably points toward a bi-modality of distribution.