According to the State Department:

In the United States, Columbus Day is typically a celebration of Italian and Italian-American cultural heritage, Columbus generally being considered a native of Genoa. . . . Italian immigrants were the first to celebrate the holiday annually in U.S. cities where they had settled in large numbers, in part as a celebration of their heritage, since Columbus was believed to be Italian. In 1937, President Franklin D. Roosevelt proclaimed Columbus Day a national holiday, then held every October 12 and now on the second Monday in October.

We notice immediately that Genoa is in northern Italy while most "Italian-Americans" trace their origins to southern Italy or Sicily. Physically, according to Columbus's son:

The Admiral was a well-built man of more than medium stature, long visaged with cheeks somewhat high, but neither fat nor thin. He had an aquiline nose and his eyes were light in color; his complexion too was light, but kindling to a vivid red. In youth his hair was blond, but when he came to his thirtieth year it all turned white.---Description by his illegitimate son, Ferdinand [Morison 1942: 44]

Special studies of southern Italians and Sicilians have been made in America, where several millions of these people live. . . . This group is . . . slightly under medium in stature . . . the great majority are thick-set, short-necked, short-fingered, broad-handed, and heavy-torsoed. They incline to corpulence in middle age, and few of the women remain slender past the period of child-bearing. . . . Facial and upper facial indices are mesoprosopic and mesene. . . . The skin color is as a rule dark; over 50 per cent of unexposed shades are definitely light brown or olive-colored, while the exposed skin often tans to a distinctive reddish-brown. Ten per cent are freckled. About 20 per cent have black hair, and 48 per cent dark brown; reddish brown shades, or dark to medium brown with a reddish glint, account for some 16 per cent, while the remaining 6 per cent have light brown or blondish colors. Pure dark eyes are found among 44 per cent of those studied; mixed eyes among 50 per cent, and pure light eyes among 6 per cent. (Carleton Coon, The Races of Europe)

More fundamentally, as the State Department site points out, "the United States evolved out of British colonization rather than the Spanish claims of Columbus and his successors".

Here is where Columbus voyaged (composite based on maps from Wikipedia): 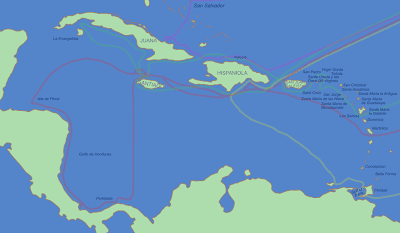 This is the United States of America:

Here is the overlap:

Haiti might be a more appropriate location for Italians to celebrate the legacy of Columbus and other Romance speakers in the Western hemisphere.
Posted by n/a at 4/30/2008 12:00:00 PM

Very fair individuals exist in the minority throughout Italy. They don't distinguish north from south as you seem to be implying. From Coon:

"The pigmentation [in northern Italy] is lighter than in southern Italy, but still prevailingly brunet."

And Columbus' discovery was vital in opening up the New World to European colonisation. His legacy should be celebrated from Alaska to Tierra del Fuego.

I'm red-haired, green-eyed and the majority of my ancestors come from a region in southern Italy. My 'phenotype' may not exactly be the norm there--which it isn't anywhere--but it certainly can be found in Italy and other mediterranean populations (e.g. Greece, Spain, etc.).

I tried to a read a bit more into what Columbus looked like and it seems there isn't any actual authoritative documentation (e.g. authenticated portraits) of what he actually looked like according to most historians. It may be so that he looked as is described in the testimony purported to be of his son you've quoted, but would it exactly bestrange to you if he had looked perhaps like any of a number of his other historical contemporaries from the colonial era?

all of which, which shouldn't need pointing out, could fit a typical 'italian' profile.

The post is a belated response to various dumb comments I've read over the years.