But I have a problem with not only the South being made the perpetual whipping boy, but now it seems this newly-discovered 'Scots-Irish' population of the South.

I've said before: look in the phone directory of most cities or towns in the South (before the current invasion) and you would see a preponderance of English surnames. The Scottish surnames in certain areas might be more numerous; I don't have as much knowledge of Appalachia, the supposed stronghold of the Scots-Irish people, but in the rest of the South, English and Welsh surnames combined far outnumber the Scottish names. Yet there is this popular notion that the old-stock Southron people are homogeneously 'Celtic' or Scots-Irish. I would like to see some documentation of this, and I don't think any is forthcoming. After centuries, I think most old-stock people in the South are a mix of Anglo-Saxon with Scots and Welsh and a dash of French (via the Huguenots in some areas) and a little German.

VA's understanding agrees with mine. Compared to New England, the South historically had a greater proportion of Scots-Irish relative to English, but the former were in the minority everywhere. Scots-Irish actually made up a slightly larger share of the population in Pennsylvania than in the South. The following table from A Century of Population Growth (pdf of the chapter in question) shows national origins of the white population in 1790 by state. 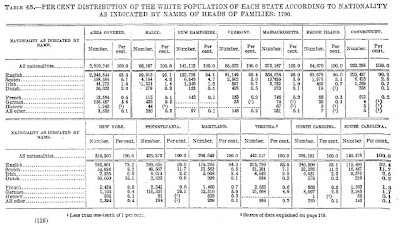 Thanks for this interesting information, which seems to corroborate my gut feeling.
Thanks for the mention and link, too.
-VA

You're welcome, and thanks for stopping by. About Appalachia: I believe the Scotch-Irish have never approached a majority there, either, but it's been a while since I looked at the issue and I can't confirm that at the moment.

But that data is from the 1790 Census. There could have been substantial “Celtic” immigration into the South after that time. I would need to see much later data before deciding whether or not the South is English instead of “Celtic.”

You do realize the Welsh are considered "Celtic" as they spoke a "Celtic" language and are genetically similiar to the Irish? Moreover, many Scots and Irish indentured servants had their names Anglicised.