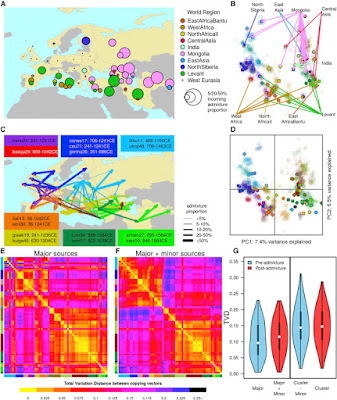 According to "The Role of Recent Admixture in Forming the Contemporary West Eurasian Genomic Landscape", something like a third of Southern Italian and Tuscan genetic ancestry appears to derive from the Levant in Roman times:

Moorjani et al [S?], who use a method based on allele frequency comparisons, and not haplotypes (ROLLOFF), found evidence for sub-Saharan African admixture in Sardinia 71±28 generations ago, at a proportion of 3%. These are the same Sardinians included in our analysis. In the largest Sardinian (sardi13) cluster in our analysis we infer West African admixture 66 (53-82) generations ago at a proportion of 2%.

S5.3 A key role for the Levant in the genetic history of the Mediterranean

Early admixture involving source groups most similar to contemporary populations from in and around the Levant (which we define as the World Region containing individuals from Syria, Palestine, Lebanon, Jordan, Saudi, Yemen and Egypt) is seen at high proportions in several clusters from Italy dating to the first half of the first millennium CE, from Southern Italy (itali8: 295CE (72BCE-604CE); α = 0.34), Tuscany (tsi23: 400CE(30BCE-686); α = 0.29), and Sardinia, as well as in a large cluster from Armenia at an early date (armen27: 363BCE(1085BCE-383CE)). [. . .] these events loosely coincide with the formation of the pan-Mediterranean Roman Empire [S?], which may also have allowed increased gene flow from east to west Mediterranean. [. . .] We infer more recent Levant admixture in the French (frenc24: 728(424-1011CE)) and in a complex multiway event in a Spanish cluster (spani9: 668 (286-876CE)). The dates and sources of admixture in these cases are consistent with movements of Middle Eastern and North African individuals during the Islamic Conquest of Spain [S?], and suggest a legacy of this key moment in southern European history in the genomes of French as well as Spanish populations.

Unless I'm reading wrong, it seems south eastern europe does not have any african or levantine admixture but has an admixture event with the north-eastern cluster during the Migration Period. There also doesn't seem to be a signal of the iran + armenian component then after the iron age.

So it appears these results are consistent with admixture in both Roman and Classical times (though I would not take the dates or sources too literally without ancient DNA evidence).

Yes, but in the single pop analysis neither bulgarians, romanians nor greeks show any levantine or african aDNA, whereas the italians and cypriots do. I remembered some results that showed SEE populations without SSA ancestry (Moorjani and the eurogenes chart) but had the western med with some small traces of it. (cyprus included) There doesn't seem to be a direct link between the MENA and south east europe in the admixture events shown.

To be honest, this seems more of an arab deal than a roman one as I doubt SSA existed so broadly in the MENA region before arab expansion. The lack of it in the east but it's presence in sicily and spain seem to suggest that even more so.

Why don't you talk about the mongol admixture in N/NE Europe, or the 37% "Armenian" admixture in Scotland from 708 AD?

This paper is just as ridiculous as their previous one: http://dienekes.blogspot.it/2014/02/human-admixture-common-in-human-history.html

Sardinians and Tuscans don't have any West African admixture, and Spanish and south Italians have only very little: http://4.bp.blogspot.com/-7IP49RXbPKI/VAlvRPVa3tI/AAAAAAAAA18/-BavO9q1o9U/s1600/Admixture_291,184_SNPs.png

There hasn't been any recent Levant ancestry in southern Europe: http://italianthro.blogspot.it/2014/06/mediterranean-sea-as-genetic-barrier.html

n/a is a NW Euro supremacist who hates jews.

YET he's yet to make the final leap even though it's more of standing long jump.

BECAUSE like all Anglophiles he's in thrall to jewish cock.

history after WW II shows that:

Yes, neolithic farmers themselves had MENA admixture, but it was only in the 10-20% range, the rest were the specific components of neolithic farmers completely uncommon in the Middle-East currently. Given neolithic farmer numbers were 10-20%(El Trocs pure neolithic farmer without extra WHG, 5000 BC in the Pyrenees had 9%), after delution, mixing with the people who brought the modern Spaniard's other genes(namely their northern/WHG components) in, that number should be around 2% as well like the Basques if there was no admixture.

Overtly defensive southern Europeans aside, it's now pretty much undeniable that there was significant Roman Empire era migration from the Middle-East to southern Europe.

Searching for the Best Dating Site? Join and find your perfect date.