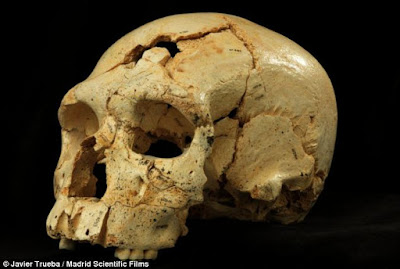 DNA from Neandertal relative may shake up human family tree

The Sima people, who lived before Neandertals, were thought to have emerged in Europe. Yet their teeth, jaws, and large nasal cavities were among the traits that closely resembled those of Neandertals, according to a team led by paleontologist Juan-Luis Arsuaga of the Complutense University of Madrid. As a result, his team classified the fossils as members of Homo heidelbergensis, a species that lived about 600,000 to 250,000 years ago in Europe, Africa, and Asia. Many researchers have thought H. heidelbergensis gave rise to Neandertals and perhaps also to our species, H. sapiens, in the past 400,000 years or so. [. . .]

After 2 years of intense effort, paleogeneticist Matthias Meyer of the Max Planck Institute for Evolutionary Anthropology has finally sequenced enough nuclear DNA from fossils of a tooth and a leg bone from the pit to solve the mystery. [. . .] They scanned this DNA for unique markers found only in Neandertals or Denisovans or modern humans, and found that the two Sima fossils shared far more alleles—different nucleotides at the same address in the genome—with Neandertals than Denisovans or modern humans. “Indeed, the Sima de los Huesos specimens are early Neandertals or related to early Neandertals,” suggesting that the split of Denisovans and Neandertals should be moved back in time, Meyer reported at the meeting. [. . .]

“It resolves one controversy—that they’re in the Neandertal clade,” says paleoanthropologist Chris Stringer of the Natural History Museum in London. “But it’s not all good news: From my point of view, it pushes back the origin of H. sapiens from the Neandertals and Denisovans.” The possibility that humans were a distinct group so early shakes up the human family tree, promising to lead to new debate about when and where the branches belong.

What are the broader implications of the research for understanding the evolution of living humans?

First, the finding pushes the age of the shared human-Neanderthal ancestor well beyond 400,000 years ago, suggesting our species, H. sapiens, might also be at least this old.

Also, with the Atapuerca group living in Europe, it’s even possible that our species evolved in this or an adjacent region of Eurasia, and later migrated back into Africa.

And being close to the common ancestor, the Atapuerca fossils give us real insights into what it must have looked like and the ancestral body form of our own species.

The fossils from Europe, Asia and Africa from around this time are physically very diverse, with some researchers thinking they represent multiple species, only one of which could be the ancestor of living humans.

Question is, which one?

This new research suggests the European branch is closest among them all and deserves much more attention in this regard.

In contrast, we don’t know, and will doubtless ever know, whether Homo naledi had anything to do with the evolution of living humans, least of all whether its brain, mind or behaviour were anything like our own.