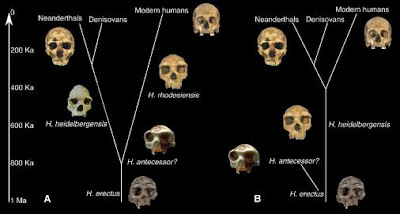 Who is Homo heidelbergensis?

H. heidelbergensis is a critical human species in the Middle Pleistocene (∼130–780 thousand years ago (ka)). We know from several beautifully preserved crania that this species had a large brain, within the lower range of modern human variation, and a less robust face than early fossil humans. We know from their long bones that they were tall, strong people. From their associated archaeology we know they were capable of producing beautiful tools such as the large handaxes found in huge numbers at Boxgrove in Sussex. But there are many unanswered questions: who exactly belongs to the species Homo heidelbergensis, where did they live, how do they fit into the human family tree, and are they a separate species at all? [. . .]

Are they our ancestors? African H. heidelbergensis material, such as Broken Hill, shares numerous features with European fossils such as Petralona, leading many to group them together. As long as Mauer is also included, this taxon can be named H. heidelbergensis. Proponents of this wide concept of H. heidelbergensis assert that the mosaic of primitive and derived features shared by this group of fossils is unique, with few traits linking them exclusively to either modern humans or Neanderthals ( Figure 1B). H. heidelbergensis is thus hypothesised to be the last common ancestor of both Neanderthals in Eurasia and H. sapiens in Africa. This scenario is probably the most popular and well supported at present. [. . .]

The geographic origin of H. heidelbergensis is still unknown, but the early fossils from Asia suggest that continent is as likely a place of origin as Europe or Africa at the moment. An Asian origin for a species directly ancestral to our own would certainly shake up the current rather Afro-centric view of our evolution.