Revolutionizing the “Out of Africa” Story

The human lineage two million years ago was a population with ape-sized brains limited to sub-Saharan Africa. The human lineage expanded into Eurasia around 1.85 million years ago, and our brain size increased throughout the Pleistocene. Anatomically modern humans first appeared in Africa about 200,000 years ago, with anatomically modern forms appearing outside of Africa at more recent dates. [. . .]

One powerful way of extracting this information about past evolution is through multilocus nested clade analysis (MLNCA). This method converts the evolutionary history of a DNA region with little to no recombination into a series of nested branches (clades), which captures time (the deeper the branch in a nested series, the older the time), and then overlays the spatial distribution of the currently observed genetic variation upon the nested series. In this manner, we can estimate the evolutionary history of current variation through both space and time. [. . .]

MLNCA does not require a prespecified model of evolution; rather, the model emerges naturally out of the cross-validated statistically significant inferences. Thus, there is no inherent bias toward any a priori model of human evolution. The cross-validated MLNCA inferences produced a model of human evolution that had some features of previous models, but unique features as well (Figure). 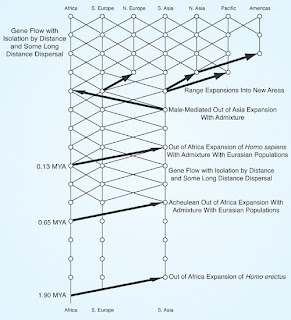 Moving Out of Africa

These Acheulean populations did not replace the Eurasian populations they encountered, but rather admixed with them. Moreover, after Acheulean expansion, there was significant, albeit limited, recurrent gene flow between Eurasia and sub-Saharan Africa.

Like the earlier Acheulean expansion, this third expansion out of Africa resulted in low levels of admixture with Eurasian populations, not complete replacement. Indeed, the hypothesis of replacement (zero admixture) was rejected with a 10-17 probability level, making this the most definitive conclusion of the analysis.

After this third out-of-Africa expansion, human populations subsequently expanded into Northern Eurasia (including northern Europe), the Americas, and the Pacific. Wherever humans went, patterns of genetic interchange were soon established (Templeton, 2005).

These results were extremely controversial when first published because of their strong rejection of the out-of-Africa replacement model, which posited that anatomically modern humans, when they expanded out of Africa into Eurasia, drove all the native Eurasian populations to complete extinction with no admixture. Even a mostly out-of-Africa expansion was anathema to the replacement advocates because a low level of admixture can still have strong evolutionary consequences.

Interestingly, the out-of-Africa replacement hypothesis rose in popularity due to a genetic analysis based on mitochondrial DNA (Cann et al., 1987). [. . .]

The fact that the mtDNA evolutionary history had no deep divergences and coalesced to a common, ancestral mtDNA molecule about 200,000 years ago certainly falsified the candelabra model. Unfortunately, the original paper reporting this mitochondrial evolutionary history falsely equated the candelabra and multiregional models, thereby leaving only the replacement model. [. . .]

However, the mitochondrial evolutionary history was also compatible with the multiregional model. Indeed, there has never been a genetic dataset or analysis that favored the replacement model over alternatives in a statistically significant fashion (Templeton, 2007). Nevertheless, the replacement model became the standard model of human evolution through the 1990s onward.

Now that ancient DNA studies offer direct confirmation of the MLNCA inference that there was admixture, this major controversy in human evolution can now be regarded as settled—at least, as settled as any scientific debate can be.

The future of human evolution studies is particularly bright due to genetics. As techniques become more refined, we can anticipate more ancient DNA studies that allow us a direct glimpse into our evolutionary past.

What is this Male dominated Out-of-Asia migration from South Asia (India?) back to Africa about 8-9000 years ago? Are those dates right?

The Templeton theory seems to have three Out-of-Africa migrations where formerly there were only two. The conventional (Cavalli-Sforza) model had one a million or so years ago with Homo erectus and another about a hundred thousand years ago with Homo sapiens. Templeton now adds another one with the Acheluen stone culture (Lower paleolithic) about midway between the two.

I've heard nothing before about this stage. Is that just me not keeping up?

Cavalli-Sforza refers to the modern tropical body type as being a West African innovation perhaps 200,000 year ago but there was another big change in Northern Africa or the Near East around 50,000 years ago in the human brain. Maybe this is associated with the Mousterian culture.

If so the Templeton three part theory would be Oldowan, Acheulean, Mousterian. Is that right?

"What is this Male dominated Out-of-Asia migration from South Asia (India?) back to Africa about 8-9000 years ago? Are those dates right?"

There have probably been various back-migrations to Africa by way of the Middle East (which would be included in "S. Asia" on Templeton's diagram). Some of these would have been relatively recent, but the one that brought what is now the predominant Y lineage in Africa (http://en.wikipedia.org/wiki/Haplogroup_E_%28Y-DNA%29) would have happened well before 9000 years ago (maybe 30,000-60,000 years ago).


"Templeton now adds another one with the Acheluen stone culture (Lower paleolithic) about midway between the two."

(VIDEO) Why your ex will NEVER come back...