Dienekes points to a Biology of Genomes poster ("Assessment of Whole-Genome capture methodologies on single- and double-stranded ancient DNA libraries from Caribbean and European archaeological human remains") that includes a PCA with a few Etruscan samples (the poster text mentions two samples, but the PCA includes three). 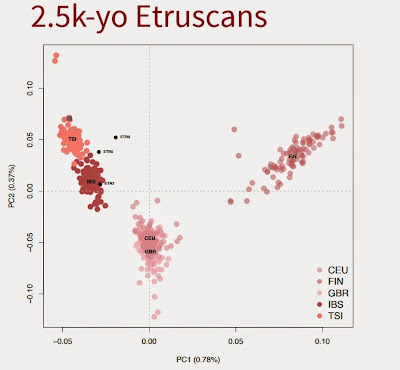 If you imagine a line running from the American and British samples (CEU and GBR) through the Spanish (IBS) and Tuscan (TSI) samples, I expect Southern Italian samples would be out past Tuscans on this line and Middle Easterners would be beyond Southern Italians.

The Etruscan samples are shifted north and/or west relative to modern Tuscans (exactly the opposite of what we'd expect if Etruscans had predominantly Near Eastern origins). Since, in the absence of other gene flow, Italic, Celtic, and Germanic admixture in Tuscany would be expected to pull Tuscans north/west relative to Etruscans, it's clear Tuscany has been influenced by southern/eastern gene flow within the past 2,500 years (with potential sources including Roman slaves, medieval slaves, Jews, and southern Italians).

Prior to the Late Neolithic / Bronze Age, nearly everyone in Europe spoke non-Indo-European languages. Basque and Etruscan (and Iberian) are unique only in having survived late enough to be documented.

It's not impossible the Etruscan language could have been brought by a late migration from the Near East, but there's no need to suppose that it was.

The Etruscans seem to be pulled somewhat east of modern Tuscans but are latitude wise very similar to southern balkanites and mainland greeks.

One of them appears to cluster with Iberians so them being broadly south-central european seems to be the case.

South Italians are indeed below as are other southern-south europeans (sicilians, greek islanders, maltese etc) which probably shows that the Etruscans would be mostly a mix of early and late neolithic with some indo-european mixed in.

Yes, these people seem like an eastern version of modern Tuscans, so central_greek/greek_thessaly/bulgarian/macedonia/kosovo in the above plot would be where they fall.

I remember hearing theories that it was only the small Etruscan ruling class was Etruscan is descent so some could be italics or former natives in the plot.

Yes, indeed, I was wrong. The location of the finnish cluster made me speak too soon. At any rate, this does seem to support that the Etruscans were a neolithic southern european population rather than an anatolian one and seem shifted westwards from Tuscans but just as south as them.

The lack of late neolithic component in them seems to be the dealbreaker and it's why it puts them closer to spaniards.

but just as south as spaniards*

What you meant to say was that the Etruscan samples are shifted in an Asian direction relative to modern Tuscans, just like the even more Asian-shifted American, British and Finnish samples (with definite sources of gene flow including Amerindian-like ANE and Uralic migrants).

But what you *really* meant to say was that nothing certain can be determined from this data because there are only three Etruscans in the sample and they all plot in different places. Though they could easily have been some kind of Yamnaya admixed Anatolians, and Tuscans are just more Neolithic like all other Italians (Sardinians would fall way out to the left on that plot).

It's certainly not at all "clear" that Tuscany has received southern/eastern gene flow within the past 2,500 years.

Further evidence that the Etruscans didn't come from Anatolia but they descended from the Villanovan culture that was a mix of Indo-Europeans and EEF. The Etruscan language derived from the EEF.

Eh??? Greeks above Tuscans??? eastern shifted it's sure, but certainly not above. As for these Etruscans is not clear at all that Tuscans "received" an eastern input after, one of them is very close and 3 is a too small number anyway to make a so great statement. It is not like they cluster with Swedish btw.

First of all 3 Etruscans are very few to state Tuscany has had an eastern influence or Jews or whatever, and i don't exclude some Tuscans can plot togheter those samples . It is not like they plot with Brits. 2nd, there have been Tuscans' likes results from a neolithic man found in Spain, so to state they are eastern shifted due to estern influences is just plain ludicrous.

Hello everyone. I was heartbroken because i had very small penis, not nice to satisfy a woman, i had so many relationship called off because of my situation, i have used so many product which i found online but none could offer me the help i searched for. i saw some few comments about this specialist called Dr osemuhau and decided to email him on so I decided to give his herbal product a try. i emailed him and he got back to me, he gave me some comforting words with his herbal pills for Penis t, Enlargement Within 1 week of it, i began to feel the
enlargement of my penis, " and now it just 2 weeks of using his products my penis is about 9 inches longer and am so happy..feel free to contact Dr osemuhau on(drosemuhau@gmail.com) him this number +2348168714427