Radio and the Rise of Nazis in Pre-War Germany

How far can media undermine democratic institutions and how persuasive can it be in assuring public support for dictator policies? We study this question in the context of Germany between 1929 and 1939. Using quasi-random geographical variation in radio availability, we show that radio had a significant negative effect on the Nazi vote share between 1930 and 1933, when political news had an anti-Nazi slant. This negative effect was fully undone in just one month after Nazis got control over the radio in 1933 and initiated heavy radio propaganda.

Here's a Google Ngram graph of usage in books of the terms "gay marriage" in red and "homosexual marriage" in blue from 1800 to 2008. The terms were essentially nonexistent until the early 1970s, after which there were a tiny, relatively stable number of references to "homosexual marriage" for two decades. Then there was an inflection point around 1994 and another one around 2003. (Methodology notes: The graph above reflects Ngram's default three-year moving average smoothing. If you turn off smoothing, the inflection points appear a little later than when smoothing is on. Of course, books perhaps lag behind other media because of their longer production cycles.)

I'm fascinated by the mechanics of media muscle reflected in the two inflection points. Here's a topic that had interested almost nobody, straight or gay, for, roughly, ever, yet then in two stages becomes a cultural obsession.

This is the fourth credible poll in the past eight months to show an outright majority of Americans in favor of gay marriage. That represents quite a lot of progress for supporters of same-sex marriage. Prior to last year, there had been just one survey — a Washington Post poll conducted in April 2009 — to show support for gay marriage as the plurality position, and none had shown it with a majority.

As we noted last August, support for gay marriage seems to have been increasing at an accelerated pace over the past couple of years. Below is an update to the graph from last year’s article, which charts the trend from all available public polls on same-sex marriage going back to 1988. 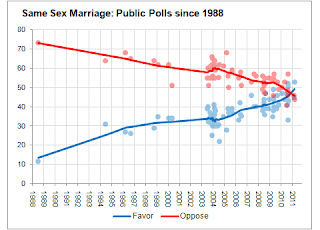 The first article reminds me of Wolfgang Schivelbusch's "Three New Deals", which argues that federal influence over radio programming during the Great Depression was a key element of Roosevelt's power and success.

And don't forget Federal One.

With the thoughts you'd be thinkin said...

http://en.wikipedia.org/wiki/Rwandan_Genocide#Media_propaganda:
"the news media played a crucial role in the genocide; local print and radio media fueled the killings while the international media either ignored or seriously misconstrued events on the ground..." and ironically "...To promote an informed population and democracy in Rwanda, international agencies had promoted development of the media during the years leading up to the genocide.[30] It appeared that promoting one aspect of democracy (in this case the media) may, in fact, negatively influence other aspects of democracy or human rights. After this experience it has been argued that international development agencies must be highly sensitive to the specific context of their programmes and the need for promotion of democracy in a holistic manner."

These two articles on the tremendous rise in support for gay marriage serve as an excellent crash course on 21st century realpolitik:

Gay marriage: a case study in conformism by Brendan O'Neil