Nature editorial urges "caution when it comes to questioning the work of scientists who are no longer with us."


This month sees the latest episode: an assault on the work of US evolutionary biologist and celebrated author Stephen Jay Gould, who died in 2002. Although the critique leaves the majority of Gould's work unscathed, it carries a special sting because it deconstructs a posthumous attack that Gould launched on nineteenth-century physician Samuel Morton. In a 1978 paper (S. J. Gould Science 200, 503–509; 1978) and in his 1981 book The Mismeasure of Man, Gould argued that Morton's measurements of the cranial capacity of hundreds of skulls from worldwide populations, reported in works published between 1839 and 1849, were unconsciously biased, by what he claimed was the physician's prejudice that caucasians were more intelligent, and therefore would have larger skulls. As Gould was canny enough to realize, a charge of unconscious bias sticks faster in science than one of fraud.

Nature editor isn't seething with indignation at the temerity of Lewis et al., or anything. He just wishes they would have published this paper while Gould was alive. Gould can't be faulted for failing to ever acknowledge or respond to a similar paper published 23 years ago -- eight years before Gould brought out a "revised" edition of Mismeasure of Man -- since that undergraduate effort was a "more modest" one:


Just as important is the readiness of the scientific community to undertake such studies, and to see them through the sometimes difficult publication process. The criticism of Gould was rejected by the journal Current Anthropology, and spent eight months in the review process at PLoS Biology. And although an undergraduate did publish a more modest study scrutinizing Gould in 1988, it is remarkable that it has taken more than 30 years for a research group to check Gould's claims thoroughly. Did Gould's compelling writing and admirable anti-racist motivations help to delay scrutiny of his facts? Quite possibly, and this is regrettable. Although future historians will be happy to scrutinize our most persuasive and celebrated luminaries, today's scientists should not leave the job to them.

Let’s pause right there. Who says it’s an example of misconduct at all, much less a canonical one? Gould didn’t; Gould argued that Morton fudged unconsciously. I wrote chapters on “Bogus Science” and on “Scientific Misconduct” in my book, Why I Am Not a Scientist (their Ref. 4), and didn’t mention Gould’s treatment of Morton, and I mentioned Morton himself only in passing, as a phrenologist. (Perhaps unsurprisingly , that interest of Morton’s – the scientific aspects of head bumps – doesn’t get a mention in the new paper.)

So why didn’t I cite it as a canonical example of misconduct? Two reasons: First, Gould himself didn’t think it was; and second, even Gould’s argument for unconscious fudging had been convincingly challenged in a paper published in Current Anthropology 23 years ago (their ref. 14).[. . .]

So I will take away two lessons from this. First, about Stephen Jay Gould. Gould, like everybody else in science, tended to see what he was looking for. That’s a good science studies lesson. Second, about this paper. For the most part, it is paranoid positivist rhetoric mixed with slovenly-argued bombast, and a warmed-over critique of Gould, not a significant new contribution to knowledge. If it were, it might have been publishable in a real journal, like Current Anthropology.

So we have: (1) Gould never accused Morton of "misconduct" (2) no one ever took seriously as an example of bias in science Gould's wholly self-invented fantasy of Morton unconsciously mismeasuring "threateningly large black skulls" (3) everyone knows this aspect of Gould's work was already "convincingly challenged" by the 1988 paper (4) Gould was biased but that just proves Gould was right.

At least we know Marks and Nature editor didn't coordinate their responses. 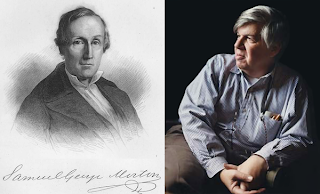 Discover How You WILL Master Your Habits And Reprogram YOUR Subconscious Brain To Get Any Result You Want In Your Personal Development and Success!