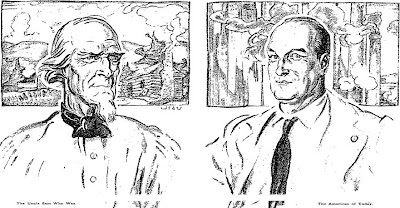 
We do not know who created the effigy of "Uncle Sam." The name itself, as is well known, dates from 1812 or 1813, and is assumed to have been simply a play on the letters "U. S." It was apparently first applied to a well-known Government servant. But the graphic representation of the "Uncle Sam" type appears later. It is somewhat provincial. It was never quite adopted by the Farther South, and it is not quite at home in the West. Its essential characteristics are a spare but sinewy frame, good but not very tall stature and a thin, shrewd but kind face, with eyes full of humor. The whole picture embodies picturesque conservatism, shrewd politics and, above all, unbounded patriotism.

Such a physical type belongs primarily to the Yankee territory. It does not agree with the prevailing types in the large cities of the country, in the North Central States, in parts of the South, in the pioneer West, Southwest and Northwest, nor with those in Alaska and our possessions. In all these regions it is the newer American type that is emerging.


given time, aggregates of any groups and any number of groups of people, particularly if all belong to one and the same fundamental race will fuse and tend to develop a new resultant, new prevalent type, characteristic of that particular nationality. [. . .] America, too, may develop a prevailing type of its own.

Based on Hrdlicka's studies of "Old Americans":


it may be seen that the ideal "Uncle Sam" type was not far from the true one. A little taller stature, a bit less hooked nose, perhaps a trace shorter arms, and the rest fits nicely.

But this type over a large part of the country tends to be superseded by another, newer type. If the old American families could remain without further admixture for several more centuries, the type would undoubtedly be further crystallized and fixed; but there is not much hope that this may be accomplished. Instead of that, there is developing the newer American type, which has already been mentioned. [. . .]

The Neo-American type will be in all probability, on the average, tall, more sanguine and somewhat less spare than the old. It will remain an intermediary white type in pigmentation, head form and other aspects. It will show for a long time a wider range of individual and local variation in all respects. And it may well be expected to be a wholesome and effective type [. . .]

"Cousin William," then, will be tall, well nourished, with a good-sized, well-filled head, though more or less bald, and with an oval, also well-filled, intelligent but frank, jovial, "enjoy-and-let-enjoy," beardless face, and smiling, mixed-light pair of eyes, fond always of a good story, a thoroughly good sport, without hypocrisy or malice, and ready for anything big or ingenious or highly profitable or for politics, at any time. A fine, big shrewd but generous young or old boy, in general. 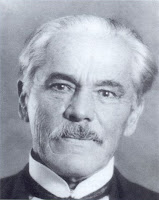 
The future of the older American stock need cause no concern. [. . .] None of these newcomers is physically so different from the older stock that the admixture with them could be regarded as of possible biological danger.

To close, here's the inflammatory opinion of Georges Vacher de Lapouge on the physical type of the Indo-Europeans:


As regards physical type, however, the image evoked by the name Aryan differs according to the author that one reads. For Mortillet, Topinard, or Drumont, the Aryan is an averred brachycephalic, resembling the chestnut peddler on our streets or the typical peasant of Piedmont, Auvergene, or Savoy. If the author is Ammon, Penka, or Wilser, the image is that of the typical globe-trotter from England or the "Uncle Sam" of the Yankees--lank-bodied, dolichocephalic, leptoprosopic, usually blond, adventurous, and aggressive. In my view, both these types were represented among the Aryans, but the dominant classes among them, the builders of the Aryan civilization, were of the type of "Uncle Sam," or, to use the terminology most suitable from the anthropological point of view, were of the race H. Europaeus.

Reference: Ales Hrdlicka. A NEW UNCLE SAM IS IN THE MAKING; Anthropology Finds Emerging From the Melting Pot "A Fine, Big, Shrewd but Generous Young Or Old Boy," Who Is Destined to Replace the Familiar Yankee as the Typical American A NEW UNCLE SAM IN THE MAKING. The New York Times. January 16, 1927, Sunday. Section: MAGAZINE, Page SM3, 3233 words.

I definitely prefer the very Nordic “Uncle Sam” type over the “Neo-American” type. Perhaps if we had experienced no immigration after the colonial era the “Uncle Sam” type would have predominated over the entire country and never been replaced? America as it might have been:

"Blue-eyed and fair haired people would be more numerous--as numerous as they are in eastern England north of London, or in southern Scotland. The average stature would also be greater than at present. Our cities would no longer contain great areas where a large share of the people are short and have black hair, dark brown eyes, and brunette skins."

How similar do you think Hrdlicka’s “Neo-American” type is to Carleton Coon’s “Northwest European” race? From Coon’s 1950 book Races: A study of the problems of race formation in man:

4. Northwest European--Most of Scandinavia, much of the British Isles, Northern France, the Benelux countries, and northwest Germany is inhabited by a population characterized by medium to tall stature, medium build, brown hair, mixed or blue eyes, light skin, straight to wavy hair of moderate abundance, and facial features intermediate between the fine chiselling of the Nordic or Mediterranean and the broader, fleshier Alpine (Plate 2). As types in this population one finds Nordics, Mediterraneans, and stocky, large-headed, broad-faced, often hairy individuals who may have such paleanthropic characters as large teeth and heavy brow ridges. This third type apparently recapitulates in some degree the pre-agricultural population of this region. Western Irish, Scots, Norwegians from the central coast, Swedes from new Goteberg, and certain other local groups deviate srongly in the direction of this type.

The northwest European race is also found as the characteristic form of the major breeding unit in the United States and Canada, New Zealand, Australia, and white South Africa. The white American mean falls so close to it that no further designation is needed. [p.120]

Although [the Nordic] is common as a type, few populations in Europe or elsewhere can be called Nordic in the strict sense. Most which other authors have called Nordic fall into our Northwest European category. [pp. 129-131]

Re: the physical type of the Indo-Europeans. Carleton Coon stated the following in The Races of Europe:

“The principal point to this chapter is that the Indo-European languages were, at one time, associated with a single, if composite, racial type, and that that racial type was an ancestral Nordic. We have determined this through a study of the skeletal remains of peoples known to have spoken these languages at or near the time of their initial dispersion from their several centers. The sub-variety of Nordic concerned in each case varied, and the variations usually depended upon mixture with other peoples, amalgamated during the process of differentiation and expansion. Nevertheless, the various brands of Nordic so produced were still very much alike.”

But will modern science ever be able to give us a definite answer about what the Indo-Europeans looked like?