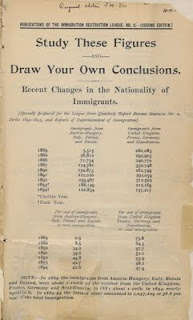 
While the collection stretches from the signing of the Constitution to the start of the Great Depression, the greatest focus is on the nineteenth century. The collection includes 1,800 books and pamphlets, 9,000 photographs, 200 maps, and 13,000 pages from manuscript and archival collections. [. . .] Themes include the Chinese Exclusionary Act, Scandinavian Immigration, and the Settlement House Movement. Both sides of immigration are illustrated with organizations such as the Children’s Aid Society, North Bennet Street School, and the Immigration Restriction League. [. . .] One of the books available online, for example, is America’s Race Heritage: An Account of the Diffusion of Ancestral Stocks in the United States During Three Centuries of National Expansion, and a Discussion of its Significance by Clinton Stoddard Burr, published in 1922. In discussing later immigration, Burr states:

“But from the year 1845 the crest of the immigration flood shows waves and troughs directly corresponding to economic or other variations in foreign countries, or to industrial conditions in the United States. The first great influx occurred in the decade from 1845 to 1854, when the potato famine in Ireland and the revolution in Germany brought many thousands to this country. The gold rush to California also attracted thousands, from England and other countries of Europe. Then followed a depression during the War of the Rebellion, recovery following only after the signing of the peace.” (p. 91)

Stoddard also imparts the view of many nativists of the time when he states:

“If we could recall the years, how many of us would wish the South to be populated in part with Negroes? Yet an even more rampant danger, from so-called white people of lowest quality, now threatens our native white stock; for we may segregate the Negro because of his remote racial type, but the qualities of low class Europeans will gradually and inevitably demoralize our body politic through introduction of a new heredity character and temperament among us.” (p. 168)

Stoddard was clearly a bigot, prejudiced against individuals of many ethnic backgrounds. However, an understanding of this point of view will allow you to greater understand your immigrant ancestors' experience in their new home.


Many of the books in the collection have probably also been digitized by (and might be more conveniently viewed at) Google Books or archive.org (as the Clinton Stoddard Burr book mentioned above has), but I would guess much of the material is not available elsewhere (e.g., the records of the Immigration Restriction League).
Posted by n/a at 12/03/2009 06:02:00 PM

European-europeans who are in the relatively comfortable position of being (more or less) 'First Nations' in Europe, cannot even get any credit for that and are denied their own demographic destiny. After all, the main stream media easily recognise these rights for the Amerindian Nations (right to autodetermination, right to ethnic identity, etc), but not for europeans. Weird. Needless to say, american europeans are even not in this position, what can they expect ?