Now “Calvinist” is a scary word in social policy, but I am strongly inclined to believe that civic engagement is biologically influenced, to a nontrivial extent. One of the foundations of behavioral genetics is that all basic personality traits—intelligence, extroversion, cooperativeness, sense of humor, etc.—are partially determined by heredity. Since people’s behavior obviously affects the kinds of societies they build, the connection between genes and social capital is not hard to make.

Consider the findings of Tom Rice and Jan Feldman, who compared levels of civic engagement among European ancestral groups in the United States. They found significant group differences, which track quite neatly with the same differences found among European countries today. In other words, Swedes are more civic than Italians, whether they still live in Europe or have long since moved to America! There is a highly persistent ethnic effect on social capital.

One could construct a purely cultural explanation for this, but it would be a stretch.


A graph from the paper I assume Richwine is referring to: 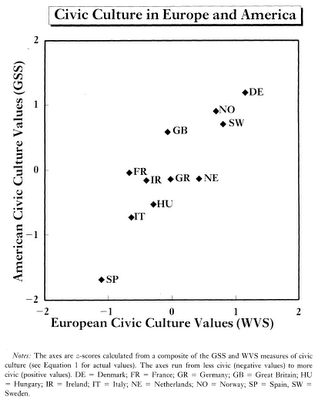 Does the low Spanish score in America reflect the inclusion of Hispanic people in that measure? Not sure if that is fair, if so, since they are highly interbred with non-Europeans.

Interesting that the Irish do comparatively better in America than in their homeland. How can we account for that?

"Does the low Spanish score in America reflect the inclusion of Hispanic people in that measure?"

It should only include (white?) people claiming ancestry from Spain. From what I recall, the GSS Spanish sample in the paper is less than half the size of the Norwegian sample, so it's not simply Hispanics.

"Irish-Americans" not being entirely Irish may play a role.

As for Italian-Americans, most of us (at least those under 50) aren't entirely Italian. Lots, myself included, have Irish, German, Polish and other NW Euro ancestry.
But most Italians in America are of Southern Italian descent, and Southern Italy has always had among the lowest civic engagement levels in Europe, for whatever reason.
Historian Peter Turchin has suggested that it has to do with the Roman plantation system that was centered in this region, and the fact that the region was invaded and ruled by outsiders so many times.

OT, but what is your view of Gregory Cochran? I enjoyed his most recent book, but I have heard that he does not believe in or support group selection. I think his collaborator Harpending does however.

The Inductivist has been discussing the issue here:
http://inductivist.blogspot.com/2009/10/types-of-people-interested-in-politics.html

Is he a Jewish neocon?

The "corruption index" put out by Transparency International seems to be correlated with civic engagement to some extent.

Notice that the European countries that were historically Protestant, and places colonized by those nations, are among the least corrupt.

Catholic countries seem to be more corrupt than Protestant countries. In Canada, Quebec is much more corrupt that the rest of country. Louisiana, once a French colony, seems to be one of the most corrupt parts of the US. In fact almost every place colonized by France seems to have turned out badly, for example Haiti, Rwanda, Vietnam, Algeria, and so forth.

Spanish colonies haven't fared much better. Most of the places where people want to live are either in north western Europe or were colonized by Britain.