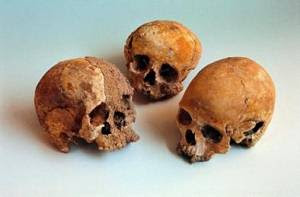 Results of ancient DNA research on the 40 Bronze Age skeletons recovered from Lichtenstein cave in Lower Saxony have been trickling out for years. A 252-page doctoral dissertation which covers much of the work (in German) may be downloaded here (Felix Schilz: Molekulargenetische Verwandtschaftsanalysen am prähistorischen Skelettkollektiv der Lichtensteinhöhle, Dissertation, Göttingen 2006). An English summary is available at dna-forums (Post #44):

Archeological artefacts (pottery, bracelets, arrowheads, a polished dogtooth, a fibula…) date the remains as 1000 to 700 BC (= the Urnfieldsculture of the Late Bronze period).
In the bronze-age the family was the biological, social and economic centre. Communities consisted out of 5 to 8 families of 5 to 10 members. These extended families lived 3 to 5 generations in the same community/location. When the soil became exhausted the community had to look for new fertile grounds.
Possibly the Lichtenstein-people lived near a fortification (Burg) in Osterode: the Pipinburg. The cave is located along the road that connected the Pipinsburg with the Thüringer plain. The presence of a Burg indicates violent and turbulent times. On the other hand Burgs were also centres of commerce and craftmenship.
Culturally the archeological artefacts belong to the Unstrut-Group. This culture blossomed in between the Unstrut river and the Southern Harz mountains. The centre of the culture was the Thüringen-valley where the fertile löss-soil was used for agriculture and raising cattle. The disappearance of the culture coincidences the end of the usage of the Lichtenstein-cave as a burial chamber.
This Untstrut-group developed out of the Funnelbeaker-culture and developped later into the Jastorf-culture (that united all local cultures to a unified ‘German’ culture).
[. . .]
DNA-reserach, by the team of Dr. Susanne Hummel, showed that all skelettons belonged to one extended family of 4 or 5 generations. This found supports the theory that the cave was used as a burial chamber. It also indicates that the cremations of the Urnfieldculture weren’t that widespread as was thought.
Bones that were found in caves in the Thüringer neighbourhood are supposed to be of persons who were ritually killed (there is even some evidence of cannibalism). For this reason it was first thought that the Lichtenstein-people also were ritually killed. But:
- the bones showed no signs of violence or cutting
- it is unlikely that a whole family was sacrified (usually the sacrified young women)
[. . .]
MtDNA-analysis
The mitochondrionale haplogroups of 36 individuals (men and women) are:
· MtHG J: 5 individuals, 14%
· MtHG T: 5 individuals, 14%
· MtHG U: 9 individuals, 25%
· MtHG H: 17 individuals, 47%
The mitochondrional-DNA research showed that there are more female haplotypes (20) than male haplotypes (5). This supports the hypothesis that the Lichtensteiners belonged to a patrilocal culture, where women married into the clan of the men).

The poster above (hansdb) ran Y-STR profiles reported for the remains through White Athey's haplogroup predictor; he determined most of the males belonged to haplogroup I1b2, two were R1a, and one was R1b. Interestingly:

In 2006 reseachers took DNA-samples among 220 people who lived for at least 3 generations in the Sösethal.
Eleven people had STR-values matched those of Lichtensteiners. Five men belonged to the rare I1b2*-haplotypes; meaning this family-line strechtes beck forr 3000 years in the same region.

But keep in mind these are only 12-marker haplotypes.

I'm skeptical of work that's been in the drawer for years and no one will publish it. They must be having difficulty convincing reviewers that they didn't amplify contaminants, at least for the sensitive Y-STR stuff. This would be sensational stuff if it were true, so why not publish?

Much of it has been published, starting close to a decade ago (including Y-STRs). Just not all in one place. You may recall stories, at various times, about MC1R, LCT, CCR5, and so on, being tested in ancient Germans. This sample and the Goettingen team were involved in all of these studies.

Most/all of the results were replicated over multiple PCR amplifications and using samples from multiple areas of each individual skeleton. The results look very solid.

Keep in mind that these bones were found in a cave with a relatively low and stable temperature.

I'm sorry to play devil's advocate, but if they could do Y-STRs 9 years ago, we should have dozens of papers on typing Y-STRs by 2008. The community has become much more strict about protocols since then.

While I understand skepticism toward aDNA claims in general, I'd say it is less warranted in this instance than in just about any other I've seen--unless you have reason to believe the researchers are guilty of outright fraud.

Considering first the quality of the remains:

An archeological find at Lichtenstein cave, near Dorste, Lower Saxony, Germany uncovered
bronze artifacts and the remains of approximately 40 people from the Bronze Age. The bones
had been relatively well preserved for approximately 3000 years due to the consistent cool
temperature and inaccessibility of the cave, which is very narrow with a low ceiling. Many of the
bones were covered with gypsum sinter, a type of calcium phosphate from saturated water that
dripped in the cave. This gypsum sinter layer was undisturbed, indicating that nobody had
entered the cave for approximately 3000 years.

Second, Hummel and others associated with this work seem to be extremely experienced in ancient DNA research. They certainly aren't unaware of potential contamination.

Third, they manage to reconstruct coherent pedigrees connecting many of the individuals, using Y, mtDNA, and autosomal results. This is not what we would expect if they were merely picking up contamination.