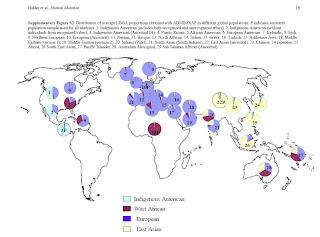 For those who care, a "new" paper from Shriver, Frudakis, and friends:

A panel of ancestry informative markers for estimating individual biogeographical ancestry and admixture from four continents: utility and applications.

Autosomal ancestry informative markers (AIMs) are useful for inferring individual biogeographical ancestry (I-BGA) and admixture. Ancestry estimates obtained from Y and mtDNA are useful for reconstructing population expansions and migrations in our recent past but individual genomic admixture estimates are useful to test for association of admixture with phenotypes, as covariate in association studies to control for stratification and, in forensics, to estimate certain overt phenotypes from ancestry. We have developed a panel of 176 autosomal AIMs that can effectively distinguish I-BGA and admixture proportions from four continental ancestral populations: Europeans, West Africans, Indigenous Americans, and East Asians. We present allele frequencies for these AIMs in all four ancestral populations and use them to assess the global apportionment of I-BGA and admixture diversity among some extant populations. We observed patterns of apportionment similar to those described previously using sex and autosomal markers, such as European admixture for African Americans (14.3%) and Mexicans (43.2%), European (65.5%) and East Asian affiliation (27%) for South Asians, and low levels of African admixture (2.8-10.8%) mirroring the distribution of Y E3b haplogroups among various Eurasian populations. Using simulation studies and pedigree analysis we show that I-BGA estimates obtained using this panel and a four-population model has a high degree of precision (average root mean square error [RMSE]=0.026). Using ancestry-phenotype associations we demonstrate that a large and informative AIM panel such as this can help reduce false-positive and false-negative associations between phenotypes and admixture proportions, which may result when using a smaller panel of less informative AIMs. Hum Mutat 0, 1-11, 2008. (c) 2008 Wiley-Liss, Inc.

Mainly, the paper seems to be pimping "ANCESTRYbyDNA™ 2.5" with information similar to that which has been provided on DNAprint's website for years. The supplementary pdf contains a list of the 176 "AIMs" and their allele frequencies for DNAprint's reference poulations, as well as the map above. (Notice the European American sample apparently has less admixture than the European reference sample and, especially, the southern European samples.)

N.B.: As far as I'm concerned, ABD is utterly useless for detecting or quantifying minor admixture in individuals.

Email ThisBlogThis!Share to TwitterShare to FacebookShare to Pinterest
Labels: admixture