Religious backgrounds of US professors circa 1969 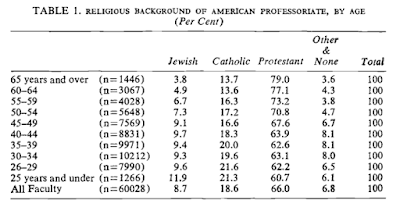 This data comes from "a large national sample (60,000) of faculty who filled out questionnaires for the Carnegie Commission on Higher Education in 1969", as reported in "JEWISH ACADEMICS IN THE UNITED STATES: THEIR ACHIEVEMENTS, CULTURE AND POLITICS" by Seymour Martin Lipset and a co-author (pdf).

Jewish overrepresentation was even greater among faculty of elite colleges and universities, and Protestants were reduced to a bare-majority of under-30 professors at elite schools by this time. 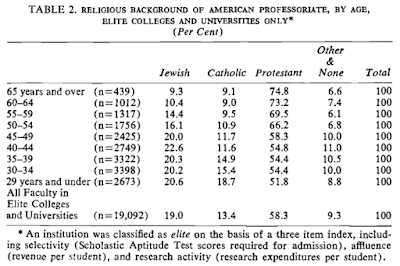 The considerable presence of Jews in social science departments (and schools of social work), in comparison to most of the humanities and natural sciences, may be related to the disposition of secularized Western Jews for reform-oriented politics, to be discussed later. A variety of studies of undergraduate career choices indicate that the more left- disposed students are more inclined than others to an academic career, particularly in the politically relevant social sciences. 14 As the newest group of disciplines, the social sciences have been less discriminatory, more committed to universalistic principles than the humanities. The latter, as the oldest and least "practical" fields, have tended to be identified with high status, and hence were more restrictive in their admission policies.

The underrepresentation of Jews in the humanities and history may reflect the continuation of a distinction frequently made in Wilhelminian and even Weimar Germany. Some who supported the appointment of Jews to professorships in the sciences and social sciences argued that they could not be professors of German literature or history. These subjects were at the heart of the Volkswesen, the national essence, while the Jews (obviously) were wesenfremd, alien to the national essence. Suspicions about the Volkswesen suitability of Jews in English and history have not completely vanished in the U.S. In his presidential address to the American Historical Association, in 1962, Carl Bridenbaugh lamented that "many of the younger practitioners of our craft . . . are products of lower middle-class or foreign origins and . . . find themselves in a real sense outsiders to our past and feel themselves shut out. This is certainly not their fault, but it is true." By "products of . . . foreign origins," we would hazard the guess, Professor Bridenbaugh was not thinking primarily of Albanians. 15

the problem with the "social sciences" is not that all its profs are liberal kikes.

the problems with them are

1. they aren't sciences. they are pseudo-sciences...necesarily...and necessarily ideological.

2. they are part of academia which has been an anachronism since the printing press...and a fotiori since recorded sound, recorded video, and the internet...

without exception, to make one's living as a professor is to be a criminal...by the very nature of the "work".

that great big cunt Robert E. Lee was offered a lot just for his name. he turned it down as it was "dishonorable" to take money for doing nothing.

yet he, proto-Republican that he was, thought being a college president was real work...rather than simple theft.

the professoriate must have its rendezvous with Blokhin...