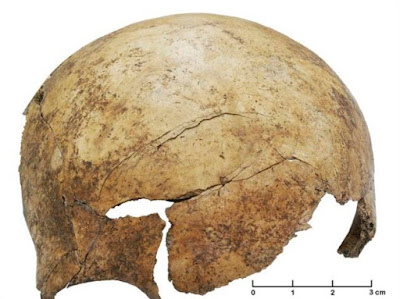 With the recently examined LBK mass grave site of Schöneck-Kilianstädten, Germany, we present new conclusive and indisputable evidence for another massacre, adding new data to the discussion of LBK violence patterns. At least 26 individuals were violently killed by blunt force and arrow injuries before being deposited in a commingled mass grave. Although the absence and possible abduction of younger females has been suggested for other sites previously, a new violence-related pattern was identified here: the intentional and systematic breaking of lower limbs. The abundance of the identified perimortem fractures clearly indicates torture and/or mutilation of the victims. The new evidence presented here for unequivocal lethal violence on a large scale is put into perspective for the Early Neolithic of Central Europe and, in conjunction with previous results, indicates that massacres of entire communities were not isolated occurrences but rather were frequent features of the last phases of the LBK.

Archaeologists who painstakingly examined the bones of some 26 men, women and children buried in the Stone Age grave site at Schoeneck-Kilianstaedten, near Frankfurt, say they found blunt force marks to the head, arrow wounds and deliberate efforts to smash at least half of the victims' shins — either to stop them from running away or as a grim message to survivors. [. . .]

"What is particularly interesting is the level of violence. Not just the suppression of a rival community — if that is what it was — but the egregious and systematic breaking of the lower legs," said Scarre. "It suggests the use of terror tactics as part of this inter-community violence." [. . .]

"The LBK population had expanded considerably, and this increases the potential for conflict," said Meyer. "Also, the LBK were farmers, they settled. So unlike hunter gatherers, who could move away to avoid conflict, these people couldn't just escape. Add to this the fact that there may have been a period of drought that constrained resources, causing conflicts to erupt."

Meyer said the theory of conflict between different groups within the LBK is supported by the existence of an apparent ancient border near the Schoeneck-Kilianstaedten site. Archaeologists have found that flint was traded on either side of the divide but not necessarily across it — suggesting the two groups did not see each other as kin, he said.

The attackers, however, spared some members of the group, with victims skewed toward young children, adult men and older women.

"It's likely that the young women, who are missing in the grave, were kidnapped by the attackers," said Meyer.

Before the recent discussions around this I never even thought someone entertained the notion in their head that people lived peacefully like Smurfs before evil [insert_violent_agressor_name] came and razed everything.

(VIDEO) Get your ex back with TEXT messages?

Discover How You Can Master Your Habits And Reprogram The Subconscious Mind To Get Any Result You Want In Your Personal Development and Fulfillment!