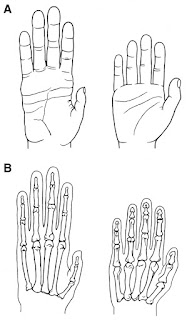 FIGHTING SHAPED HUMAN HANDS. Protective buttressing of the human fist and the evolution of hominin hands

The derived proportions of the human hand may provide supportive buttressing that protects the hand from injury when striking with a fist. Flexion of digits 2–5 results in buttressing of the pads of the distal phalanges against the central palm and the palmar pads of the proximal phalanges. Additionally, adduction of the thenar eminence to abut the dorsal surface of the distal phalanges of digits 2 and 3 locks these digits into a solid configuration that may allow a transfer of energy through the thenar eminence to the wrist. To test the hypothesis of a performance advantage, we measured: (1) the forces and rate of change of acceleration (jerk) from maximum effort strikes of subjects striking with a fist and an open hand; (2) the static stiffness of the second metacarpo-phalangeal (MCP) joint in buttressed and unbuttressed fist postures; and (3) static force transfer from digits 2 and 3 to digit 1 also in buttressed and unbuttressed fist postures. We found that peak forces, force impulses and peak jerk did not differ between the closed fist and open palm strikes. However, the structure of the human fist provides buttressing that increases the stiffness of the second MCP joint by fourfold and, as a result of force transfer through the thenar eminence, more than doubles the ability of the proximal phalanges to transmit ‘punching’ force. Thus, the proportions of the human hand provide a performance advantage when striking with a fist. We propose that the derived proportions of hominin hands reflect, in part, sexual selection to improve fighting performance.

Human hands have 'evolved for fighting'

Experts have long assumed these features evolved to help our ancestors make and use tools.

But new evidence from the US suggests it was not just dexterity that shaped the human hand, but violence also.

Hands largely evolved through natural selection to form a punching fist, it is claimed.

''The role aggression has played in our evolution has not been adequately appreciated,'' said Professor David Carrier, from the University of Utah.

''There are people who do not like this idea but it is clear that compared with other mammals, great apes are a relatively aggressive group with lots of fighting and violence, and that includes us. We're the poster children for violence.'' [. . .]

''Individuals who could strike with a clenched fish could hit harder without injuring themselves, so they were better able to fight for mates and thus be more likely to reproduce,'' he said. [. . .]

To test the theory Prof Carrier conducted experiments with volunteers aged 22 to 50 who had boxing or martial arts experience.

In one, participants were asked to hit a punchbag as hard as possible from different directions with their hands in a range of shapes, from open palms to closed fists.

The results, published in the Journal of Experimental Biology, show that tightly clenched fists are much more efficient weapons than open or loosely curled hands.

A punch delivers up for three times more force to the same amount of surface area as a slap. And the buttressing provided by a clenched fist increases the stiffness of the knuckles fourfold, while doubling the ability of the fingers to deliver a punching force. [. . .]

''Human-like hand proportions appear in the fossil record at the same time our ancestors started walking upright four million to five million years ago. An alternative possible explanation is that we stood up on two legs and evolved these hand proportions to beat each other.''

Manual dexterity could have evolved without the fingers and palms getting shorter, he said. But he added: ''There is only one way you can have a buttressed, clenched fist: the palms and fingers got shorter at the same time the thumb got longer.''

Prof Carrier cited other evidence pointing to the role of fighting in the evolution of human hands.

:: No ape other than humans hits with a clenched fist.

:: Humans use fists instinctively as threat displays. ''If you are angry, the reflexive response is to form a fist,'' said Prof Carrier. ''If you want to intimidate somebody, you wave your fist.''

:: Sexual dimorphism, or the difference in body size between the sexes, tends to be greater among primates when there is more competition between males. In humans the difference is mainly in the upper body and arms, especially the hands. ''It's consistent with the hand being a weapon,'' said Prof Carrier.

In their paper the professor and colleague Michael Morgan, a University of Utah medical student, ponder on the paradoxical nature of the human hand.

''It is arguably our most important anatomical weapon, used to threaten, beat and sometimes kill to resolve conflict. Yet it is also the part of our musculoskeletal system that crafts and uses delicate tools, plays musical instruments, produces art, conveys complex intentions and emotions, and nurtures,'' they write.

''More than any other part of our anatomy, the hand represents the identity of Homo sapiens. Ultimately, the evolutionary significance of the human hand may lie in its remarkable ability to serve two seemingly incompatible but intrinsically human functions.''

Broad palms and shorter fingers are positively correlated with extroversion: