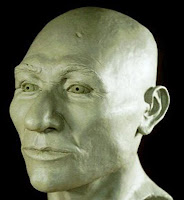 The skeleton, more than 9,500 years old, has long been at the center of a rift between tribal members and scientists, led by Doug Owsley, a physical anthropologist at the Smithsonian Institution's National Museum of Natural History who spearheaded the legal challenge to gain access to the skeleton for scientific study.

Owsley says study shows that not only wasn't Kennewick Man Indian, he wasn't even from the Columbia Valley, which was inhabited by prehistoric Plateau tribes. [. . .]

Isotopes in the bones told scientists Kennewick Man was a hunter of marine mammals, such as seals, Owsley said. "They are not what you would expect for someone from the Columbia Valley," he said. "You would have to eat salmon 24 hours a day and you would not reach these values.

Pressed by Armand Minthorn of the Umatilla Board of Trustees, who asked Owsley directly, "Is Kennewick Man Native American?" Owsley said no. "There is not any clear genetic relationship to Native American peoples," Owsley said. "I do not look at him as Native American ... I can't see any kind of continuity. He is a representative of a very different people."

His skull, Owsley said, was most similar to an Asian Coastal people whose characteristics are shared with people, later, of Polynesian descent.

And, while tribes want the remains returned for reburial, Owsley said there is still much more to learn from the skeleton, which has largely been inaccessible but for two instances, in which a team of about 15 scientists could study it for a total of about two weeks.

Note: my own understanding is that Kennewick Man is broadly similar to other Paleoindians, and that historical Amerindians probably derive most of their ancestry from Paleoindians (with some later Asian gene flow and evolution in a more Mongoloid direction). On the other hand, it appears W. Eurasian-affiliated ancient Central Asians did contribute significantly to the ancestry of Paleoindians (and, to a lesser extent, to the ancestry of modern E. Eurasians in general), which is what I expect most of the heightened affinity between Northern Europeans and Amerindians found by Reich et al. is attributable to.
Posted by n/a at 10/12/2012 01:25:00 AM

"W. Eurasian-affiliated ancient Central Asians did contribute significantly to the ancestry of Paleoindians"

So you don't believe there was any significant prehistoric seaborne colonization of America directly from Europe? (Or, at none or near-none that survived in the Amerindian genepool).

In that case, how can one explain certain ancient Amerindian technology being so similar to Solutrean technology of prehistoric Europe?

Correct. I see no genetic evidence to support the Solutrean hypothesis. I don't have a strong opinion either way on the archaeology.

It seems possible to me that Haplogroup X did come from Europe, but much later than the Solutreans came over - possibly Bronze Age. Someone mined a lot of copper in the northeastern US in ancient times yet the Indians themselves rarely used metal objects. Some have speculated that it was being shipped to the Old World.

Lots of European haplogroups show up in studies of Amerindians, but with the exception of mtDNA haplogroup X, these are all automatically assumed to be post-Columbian admixture. It's not obvious to me that that's the case. Most of the areas where we find lots of mtDNA haplogroup X also show high levels of y-DNA haplogroup R1b, which is interesting. I know the difference between European hg X and Amerindian hg X is supposed to go back 13,000 years, but that could just be due to the fact that it only occurs at low frequencies on both sides of the Atlantic or that it has become less common in NW Europe during the last few thousand years.

Also, I wonder if n/a has any opinions about the "Windover Bog people" who are alleged to have European DNA:

Strangely, despite the very strong claims made in this video, nothing of any sort seems to have been published about the DNA of the Windover Bog people.