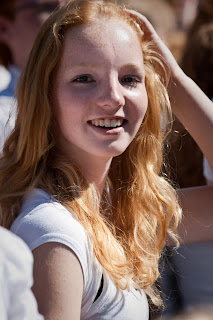 Wikipedia: "Redheadday is the name of a Dutch summer festival that takes place each first weekend of September in the city of Breda, in the Netherlands."

Facts about redheads: "Red hair is seen on the heads of only less than one percent of people.in the world. Most redheads live in the U.K., Ireland, and former colonies of U.K. like Australia.

The highest percentage of natural Redheads in the world is in Scotland (13%), followed closely by Ireland with 10%. In the US, about 2% of the population are natural redheads.

Redheads are becoming rarer and could be extinct in 100 years, according to genetic scientists."

Red hair is prized in women, but stigmatized in men. Why?

"Redheads are becoming rarer and could be extinct in 100 years, according to genetic scientists."

That's obviously a preposterous notion, for a trait with concentrations of 13% and 10% among two nations of several million people and with no known fatal side-effects.

Red hair is prized in women, but stigmatized in men. Why?

"Who, whom" is the relevant question here.

Southern Euro, Jewish, Negro, etc. males want access to female redheads. Stigmatizing male redheads is an attempt to debase and devalue the relative standing of their competitors for access to these women.

I agree. Nothing wrong with red haired dudes!

There is a definite bias against blond men as well though: http://www.vdare.com/sailer/050619_obsession.htm

Of course it's not literally true. I also conceive the issue differently: redheads or blonds don't form separate and distinct populations in and of themselves. What's indisputable is that the Northwestern European populations which harbor this diversity of hair and eye color are threatened. Answering the "myth" that blonds are facing extinction by pointing out that blond coloring would still pop up occasionally among frizzy-haired brown quad-racials inhabiting some far future Dark Age Europe is sort of missing the point. I might put up post on this later.

They 'always say' blonds might decline or go extinct in the future, not right now. And it's hardly nonsense.

Southern Euro, Jewish, Negro, etc. males want access to female redheads. Stigmatizing male redheads is an attempt to debase and devalue the relative standing of their competitors for access to these women.

Bullshit. I suggest you Google on the widespread "anti-ginger" sentiment among native white Brits.

Right, since native white Brits aren't under any sort of Jewish influence at all.

For many Jews, anti-gingerism would be self-hatred.

There is a somewhat natural tendency for extreme depigmentation to be seen more favorably in women than men, although many other factors come into play such as muscularity, facial bone structure, etc. If a male happens to be a redheaded endomorph, yes he will certainly not be favored by females unfortunately. However Robert Redford and Eric Stoltz don't have an issue.

I find a blond male with a female redhead to be a striking combination.

Although the recessive genes themselves will not be lost, the blonde and redheaded European phenotype will be. It's the total phenotype that is the tragic loss. A blonde mestizo, Semite or quadroon with freckles is of no interest to me.

A blonde mestizo, Semite or quadroon with freckles is of no interest to me.

Razib looks forward to increases in such Moreauvian diversity.

Anyone know the chronology of the rise of anti-gingerism in Britain? I think this is a pretty recent phenomoneon, like dumb blonde jokes.

Anyone know the chronology of the rise of anti-gingerism in Britain? I think this is a pretty recent phenomoneon, like dumb blonde jokes.

The average person today probably thinks that dumb blonde jokes have been around forever, but as Peter Frost has shown they are a recent phenomenon driven primarily by Jewish influence and more generally by the introduction of swarthoids into Northern European societies. I suspect similar dynamics are at work behind the rise of "anti-gingerism."

"The current blonde stereotype began in the U.S. of the early 20th century. It was a product of ethnic contact between the native-born population and darker-haired immigrants (Italians, Jews, Greeks, etc.) who were often shocked by the relative sexual freedom of ‘American’ women. This attitude existed in different communities, but it entered the mainstream culture primarily via Jewish immigrants and specifically through their contributions to art and literature. It is a common theme in Jewish-American novels:

The exotic female in Jewish life is the sexy shiksa, frequently a blue-eyed blonde who offers gratifications withheld, at least until marriage, by proper Jewish girls. […] A blend of arrogance and defensiveness prompts many Jews to claim that shiksas are more carnal and promiscuous than women of their own faith because Christians are less intelligent, refined, and clean than themselves. Goyishe Kopf (literally translated as gentile head), the Yiddish colloquialism for stupidity, exemplifies the traditional contempt for Christians. (Jaher, 1983)

This theme entered popular American culture through fiction, motion pictures, and comedy routines, with well-known examples including the novel Portnoy’s Complaint by Philip Roth and the typecasting of Marilyn Monroe in vamp roles (Jaher, 1983).

The ‘dumb blonde’ stereotype gradually spread outside the U.S. As a rural Ontario teenager in the 1970s I heard this term on American sitcoms, but it had no connection to my reality. Nor were the blondes at my school thought to be sexually permissive. In the late 1980s, as a doctoral student in Quebec City, I remember the puzzlement that initially greeted blonde jokes, this humor having no relation to existing beliefs about hair color in French Canada. Today, blondes are routinely stereotyped throughout Canada as being sluttish and stupid, as if they have always been so.

This stereotype likewise came late to Europe. In the mid-1960s, Bastide (1967, p. 326) noted the following about the movie industry: “In Europe, a blond is usually the heroine, and a brunette the dangerous woman. In Brazil, the dark woman is loving and faithful, while the blond is the vamp who leads a man to ruin.”"

What's more disgusting is that Whites and even pro-Whites perpetuate these anti-White, anti-Northern European stereotypes. You will usually find a Levantine like Scrooby Jew, a North Africanish swarthoid like Reginald or a questionably-White person like "Jack Ryan" at OD who repeat these lies. They pretend to be White but in fact are racially alien invaders. You know them by their words and behavior.

The anti-blonde thing is clearly being "pushed from above" by the media. Nobody actually dislikes blondes.
The anti-gingerism, OTOH, seems to "rise from the bottom" - from the British white lower classes.

The anti-gingerism, OTOH, seems to "rise from the bottom" - from the British white lower classes.

Here is the music video to the song "Born Free" by the UK based Hindoo rapper "M.I.A.":

The video is about male redheads being violently rounded up by an armed force and sent to concentration camps out in the desert. Young male redheads are depicted being shot in the head and being blown up by land mines.

M.I.A. is a UK based Hindoo rapper who has been heavily promoted by the Jewish dominated music industry and media. She is married to and has had a child with Benjamin Zachary Bronfman, who is involved in the music industry and is a member of the Bronfman family. The Bronfman family fortune is in the billions, and the family is heavily involved with the World Jewish Congress and other Jewish causes. Benjamin Zachary Bronfman's father is Edgar Bronfman Jr., the current CEO of Warner Music Group and former CEO of Seagram and vice-chairman of Vivendi Universal. Edgar Bronfman Jr. also has major stakes in other parts of the entertainment industry such as film and media.

Families which have many redheads therein most certainly have some Neanderthal DNA. - http://www.nytimes.com/2010/05/07/science/07neanderthal.html

Tacitus on the Germans before they became extensively mixed:

"For my own part, I agree with those who think that the tribes of Germany are free from all taint of intermarriages with foreign nations, and that they appear as a distinct, unmixed race, like none but themselves. Hence, too, the same physical peculiarities throughout so vast a population. All have fierce blue eyes, red hair, huge frames, fit only for a sudden exertion. They are less able to bear laborious work. Heat and thirst they cannot in the least endure; to cold and hunger their climate and their soil inure them." - http://www.sacred-texts.com/cla/tac/g01000.htm

Herodotus on a tribe of the Scythians, the Budini:

"Above the Sauromatae (Sarmatians), possessing the second region, dwell the Budini, whose territory is thickly wooded with trees of every kind. The Budini are a large and powerful nation: they have all deep blue eyes, and bright red hair."

The Greek historian Dio Cassius described Boudica, the famous Celtic Queen of the Iceni, to be "tall and terrifying in appearance... a great mass of red hair... over her shoulders." Also, several mythological characters from Homer's Iliad, (themselves purportedly Greek) are described as being "red-haired" including Menelaus and Achilles.

The Roman author Tacitus commented on the "red hair and large limbs of the inhabitants of Caledonia (Scotland)", which he connected with some red haired Gaulish tribes of Germanic and Belgic relation. The half Greek half Turkish pirate Red Beard or Hayreddin Barbarossa is said to have had a fiery red beard.

Red hair has also been found in Asia, notably among the Tocharians who occupied the northwesternmost province of what is modern-day China. Many of 2nd millennium BC Caucasian Tarim mummies in China have been found with red and blonde hair.

Families which have many redheads therein most certainly have some Neanderthal DNA. - http://www.nytimes.com/2010/05/07/science/07neanderthal.html

"For many Jews, anti-gingerism would be self-hatred."

Uh, hasn't self-hatred among this group already been noted?

Families which have many redheads therein most certainly have some Neanderthal DNA.

All persons descended from the Cro-Magnon racial-stock [that is to say, almost all Europeans] have some Neanderthal DNA.

Most redheads live in the U.K., Ireland, and former colonies of U.K. like Australia.

Norway has an appreciable percentage of red-haired people too. (2-3%).

Erik the Red, after all, didn't earn his title due to following a Viking Karl Marx!

Norway has an appreciable percentage of red-haired people too. (2-3%).

I cannot find statistics on this in my brief review of the literature. But the 2-3% figure can be derived:


According to Carlton Coon's "The Races of Europe", Norwegians overall are light-blond at a rate of 33% (reaching 50% among rural farmers) [link]. In Troms, only 23.4% are light-blond because of Lappish presence. The general-Norway figure for light-blondness can be derived by multiplying the Troms figure by 142%. If this holds true for red-hair too, then Norway's general rate of red-hair is 2.1%

That's obviously a preposterous notion, for a trait with concentrations of 13% and 10% among two nations of several million people and with no known fatal side-effects."